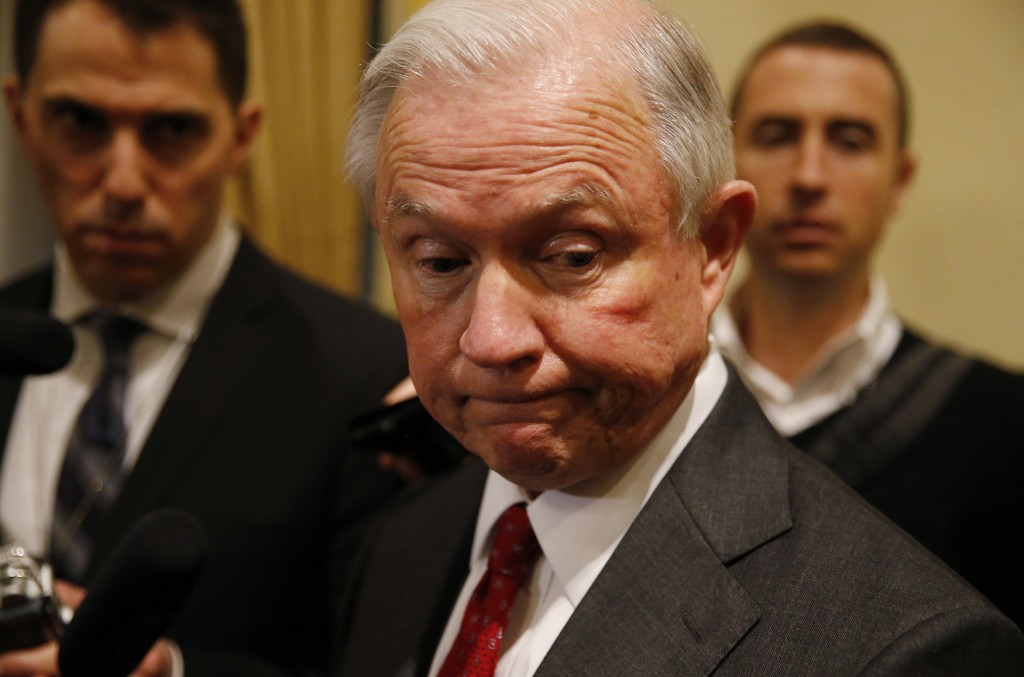 And so it goes. (Reuters/Jim Bourg)

Alabama Senator Jeff Sessions, US president-elect Donald Trump’s choice for attorney general, is widely considered one of the most conservative Republicans in the senate and has a controversial history as a federal prosecutor in his home state.

In particular, Sessions—who endorsed Trump early in the campaign—has a rather dubious record when it comes to women’s rights. Here are some of key positions he has taken in recent years:

Opposed the reauthorization of the Violence Against Women Act

Sessions was one of the 22 Republican senators who opposed the reauthorization of the Violence Against Women Act in 2013. The bill aimed to broaden the reach of domestic violence programs to include new protections for LGBT and Native American victims of domestic violence.

“I favor the Violence Against Women Act and have supported it at various points over the years, but there are matters put on that bill that almost seem to invite opposition,” said Sessions, in argument for his objection to the legislation. “You think that’s possible? You think they might have put things in there we couldn’t support that maybe then they could accuse you of not being supportive of fighting violence against women?”

Sessions has consistently voted against abortion rights, and has been heavily criticized by pro-choice activists. “The last person women and families need in this job is someone who has repeatedly given a pass to individuals who commit acts of violence against abortion clinics, doesn’t take sexual assault seriously, and was determined to be too racist by a GOP-led Senate to become a federal judge,” Ilyse Hogue, the president of NARAL Pro-Choice America, said in a statement.“But that’s who Jeff Sessions is. His record of misogyny and racism makes him unfit to be the country’s top lawyer. The American people deserve far better, but with Donald Trump at the helm, we know we won’t get it.”

Unlike many Republican legislators who came out strongly against Donald Trump’s now infamous comments about grabbing womenwithout their consent, Sessions seemed to hedge. He told the Weekly Standard that Trump used “very improper language” but added that “I don’t characterize that as sexual assault. I think that’s a stretch. I don’t know what he meant.” When a reporter from The Weekly Standard pressed him, asking directly whether grabbing a woman by the genitals was sexual assault he said, “I don’t know. It’s not clear that he—how that would occur?”

Later he said that his views that been inaccurately represented. “My hesitation was based solely on confusion of the contents of the 2005 tape and the hypothetical posed by the reporter, which was asked in a chaotic post-debate environment. I regret that it resulted in an inaccurate article that misrepresented my views,” he said in a statement. “Of course it is crystal clear that assault is unacceptable. I would never intentionally suggest otherwise.”

Before the debate he told Fox News that the comments were not disqualifying. “This thing is overblown. Everybody knows that Trump likes women,” Sessions said. “This is not a disqualifying event.”

Trump has called Sessions a “world-class legal mind,” but others are not quite so sure. “If you have nostalgia for the days when blacks kept quiet, gays were in the closet, immigrants were invisible, and women stayed in the kitchen, Senator Jefferson Beauregard Sessions is your man,” said Democratic congressman Luis Gutierrez in a statement.

Previous post
“I live here, why should I be afraid?”: South Asian immigrants respond to Trump’s election with uncertainty
Next post
To see how Trump could suppress women’s rights, read Texas’s proposed laws forcing the burial of miscarriages