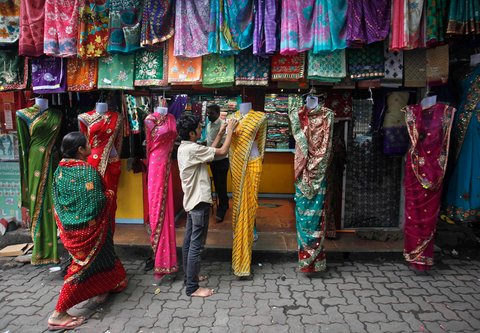 Nayan Lapsia spent much of a humid Wednesday afternoon looking despairingly at the idle cash register at his store in Crawford Market, a colonial-era open-air market in the heart of Mumbai, India’s financial capital. Though customers have stopped by fleetingly to glance at goods, things were unusually quiet at his shop, Shah Bhavanji Kunvarji & Company, which is stacked with all manner of spices and dry fruit.

In Crawford Market, a bustling labyrinth of narrow lanes lined with small stores selling a wide range of groceries, a sense of despair hangs in the air these days. Shopkeepers complain of declining sales coupled with the rising cost of living. Mr. Lapsia said the prices of his goods, many of which are imported, have risen nearly 40 percent over the past three months, hurting sales, which have fallen about 30 percent.

With general elections looming on the horizon, Crawford Market retailers are increasingly frustrated with the government, which is seen as corrupt and inept. “If the government doesn’t change its policy toward business, all the small store owners will be ruined,” Mr. Lapsia said, shaking his head.

As India battles with slowing growth, rising inflation and a weakened rupee, small businesses across the country are among the worst affected.

“The problems faced by all of corporate India get magnified for small traders and retailers,” said Saugata Bhattacharya, chief economist at Axis Bank. “When growth slows and prices are soaring, the discretionary income that people have to spend on consumer goods and services comes down drastically and people cut back on purchases.”

He added that a weaker rupee, which makes imports more expensive, hits small retailers especially hard because they do not have sufficient bargaining power to negotiate better prices from their overseas suppliers and cannot pass on all of the extra cost to their price-sensitive customers.

The Indian rupee has stabilized since hitting a record low of 68.85 against the American dollar, but the currency’s fall has led to higher import prices for beans, edible oil, fertilizer and crude oil in rupee terms. These higher costs contributed to wholesale and consumer inflation rates that hit an annual 6.1 percent and 9.5 percent, respectively, in August. Mr. Bhattacharya of Axis Bank said he expected inflation rates for September, scheduled to be released by the government on Monday, to remain close to August levels.

“Inflation is likely to persist in the next few months, as even with the rupee stabilizing, it is at a much higher level compared to what it was in April this year,” said Ashish Parthasarthy, head of treasury at HDFC Bank.

Najmuddin Fakhruddin Masalawala, owner at Hakimi Stores, which has been at Crawford Market for 35 years, said he has had to raise prices for his lentils, rice and other groceries sharply over the last two months, but sales are down 20 percent. He said lentils, which previously sold for about 70 rupees per kilogram (2.2 pounds), are now 90 rupees per kilogram.

“When a working class person comes to the store, they ask why the prices have gone up so much that their bill that used to be 800 is now coming to 1,200,” he said. “What can we say to them? We are helpless. We have to raise our prices to survive.”

Even for those merchants whose goods are sourced locally, the rising cost of transportation from imported fuel is cutting into profit margins.

“Transport prices have increased by about 20 percent over the last three months,” said Harish Sethia, the owner at Jeet Traders, a wholesale merchant for grains, spices and dry fruit in Bhat Bazaar, a Mumbai neighborhood known for its wholesale grain stores. He added that his sales were down about 25 percent and that business has been sluggish for most merchants in Bhat Bazaar. 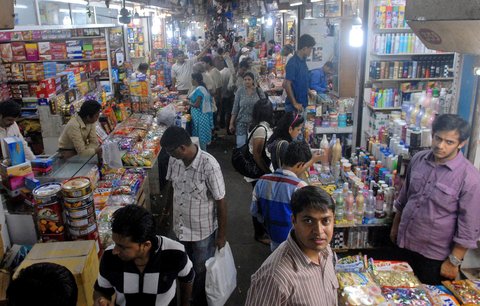 In Lohar Chawl, which is packed with home electronics and appliance retailers, stores were unusually empty on a weekday. At the Central Electric & Radio Company, which has been selling light fixtures for 56 years, a sign announcing a clearance sale failed to attract customers.

Three salesmen passed the time over cups of tea. One of them, Surendra Kumar, said sales were down almost 50 percent over the last two months despite the store’s steep price cuts.

Next door, in a one-room office located in a dilapidated building, Sanjay Shah, partner at Siddhi Home Appliances, wrung his hands in worry. “Business is down, very down,” said Mr. Shah, a distributor for Prestige home appliances across over 40 stores in Mumbai. “People have lost their purchasing capacity. People do not have money for food and clothing, appliances are the last necessity.”

Over the last quarter Mr. Shah has seen about a 40 percent drop in sales, compared to the same time last year.

“As a businessman, I only ask that the government make policies that allow the country to run smoothly,” said Mr. Shah. “But this government is not able to do even that. Something has to change.”

India’s new central bank governor, Raghuram Rajan, has taken steps to roll back measures that were imposed when the rupee was in a free fall over the summer. On Monday, the Reserve Bank of India cut a short-term lending rate for banks borrowing from the central bank, easing a cash crunch in the weeks before the Diwali holiday season.

Capital goods production, a measure of investment, contracted 2 percent in August from a year earlier, while consumer goods contracted 0.8 percent.

“There is no easy fix to India’s woes in a growth environment where India’s potential output has also fallen,” said Mr. Bhattacharya. “You cannot boost consumption through stimulus measures because that will stoke inflation. The growth story in India has to be investment led.”

India’s growth rate is expected to drop from the 9.3 percent expansion recorded in 2011 to 5.3 percent in the current fiscal year through March 2014, according to a forecast released by Prime Minister Manmohan Singh’s Economic Advisory Council on Sept. 13.

That estimate is only slightly higher than the 5 percent growth seen in the last fiscal year, the slowest in a decade. However, Finance Minister P. Chidambaram said the economy should pick up more speed in the second half of this year.

“We have taken numerous reform measures over the past one year,” said Mr. Chidambaram said at the Carnegie Endowment for International Peace on Thursday in Washington. “We expect these measures to show their impact from the second half of the current fiscal and believe that the Indian economy will grow at over 5 percent and perhaps closer to 5.5 percent in 2013-14.”

As the country approaches general elections, scheduled for next year, analysts worry that the government will abstain from making any politically unpopular decisions to fix the country’s finances, whose problems include a large current account deficit.

Among the disgruntled traders and shopkeepers of Crawford Market, few believe that the government’s election-season gestures of generosity will amount to real change. “There is anger against the government, but in India people don’t really care about politics; they just want to fill their stomachs and live their lives,” said Mr. Lapsia. “The government has no reason to improve things.”