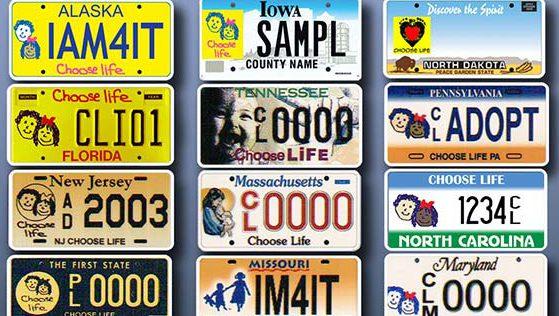 In the US, drivers stick vanity license plates on their cars to express support for everything from national parks and veterans to breast cancer awareness—and anti-abortion clinics. Twenty-nine states offer “Choose Life” license plates that cost anywhere from $25 to $70, according to the Guttmacher Institute. 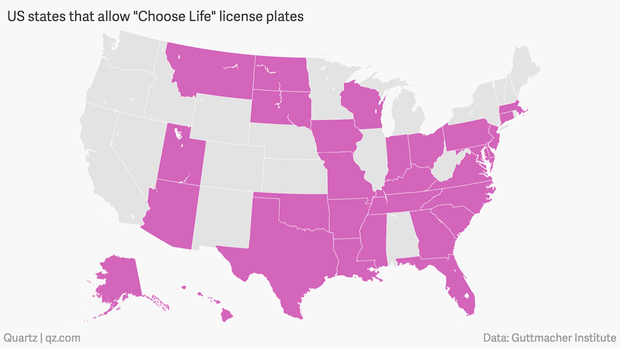 In 1997, Randy Harris, a county commissioner in Florida, started the organization Choose Life to promote the creation and sale of these license plates across the country. He wanted to use sales to fund “pro-life pregnancy centers” and “other life affirming agencies,”according to the organization’s website. In 2000, Florida became the first state to pass legislation that allowed the sale of these specialty plates.

Proceeds from those sales were initially passed on to counties in Florida. Then, in 2011, Choose Life successfully lobbied for a statutethat would allow the organization to administer the funds and distribute them to pregnancy care centers, maternity homes, and non-profit adoption agencies.

After their victory in Florida, the organization pushed for similar programs in other states across the country. From 2000 to date, the number of states that allow Choose Life license plates grew to 29; anti-abortion groups are currently working on pushing through legislation to allow Choose Life plates in an additional 16 states.

(In Montana, the sale of anti-abortion plates was approved, but is currently suspended because of administrative problems, according to Choose Life. A local affiliate of Choose Life is working to get the plate re-approved this year.)

The plates are sold by local affiliates of Choose Life and proceeds are used for all sorts of things; in 18 states, a portion is used to fund adoption organizations. In Iowa, funds raised by the plates go to pay for roads and road repairs.

But in others, they are used to fund crisis pregnancy centers—which reproductive health organizations say is an unconstitutional mixture of church and state.

According to Guttmacher, in 15 states, a portion of the proceeds go to funding anti-choice or crisis pregnancy centers (CPCs), which often provide biased and medically inaccurate information to women who are seeking family planning services. 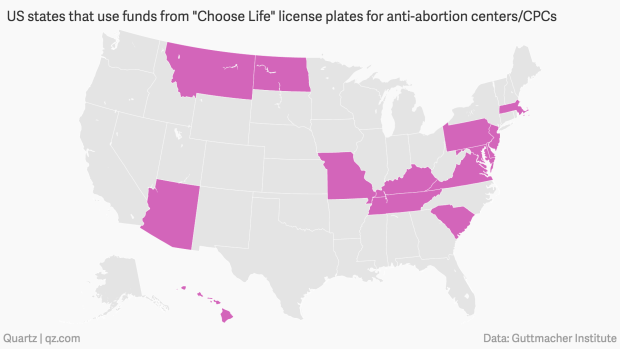 Reproductive rights activists have challenged the approval of Choose Life plates on the basis that it’s unconstitutional for a state to endorse political viewpoints or fund agencies affiliated with churches or religious organizations. Often, CPCs espouse overtly Christian beliefs.

In 2015, the pro-choice organization NARAL carried out an undercover investigation in 10 states to document the scare tactics used and lies disseminated by CPCs. They found that the centers used misleading advertising—such as “Pregnant? Need Help? You have options”—to suggest inaccurately they were family planning centers. The centers also gave NARAL’s undercover investigators false health information, saying that getting an abortion can cause breast cancer, cervical incompetence, infertility, and mental health complications—none of which is true.

The US government doesn’t regulate CPCs, and so the information provided at each center varies greatly. “In some it is what you might call ‘benign’—it generally meets medical standards,” says Elizabeth Nash, the senior state issues manager in the Guttmacher Institute’s Washington, DC office. “In other cases the information given to women is rife with inaccuracies or is misleading in some way.”

Legal efforts to stop the Choose Life plate programs have, to date, been unsuccessful. “Typically the plates have withstood a legal challenge and they have been able to go forward in part because they argue that this is free speech—the people who want to put this on their plates are exercising their first amendment rights,” says Nash.

Reproductive health advocates are trying to even the balance in other ways: States like Virginia, Pennsylvania and Montana also have plates to support family planning, and the funds raised from these plates tend to go to family planning providers.

There’s a sizable amount of money at stake. Choose Life says that the organization has raised over $24 million as of Dec. 31, 2016 and the total reported number of choose life license plates sales and renewals nationally is over 1.1 million.

Previous post
To save its budget, the US State Department is defining gender equality as a national security issue
Next post
There’s one sure way to reduce police brutality