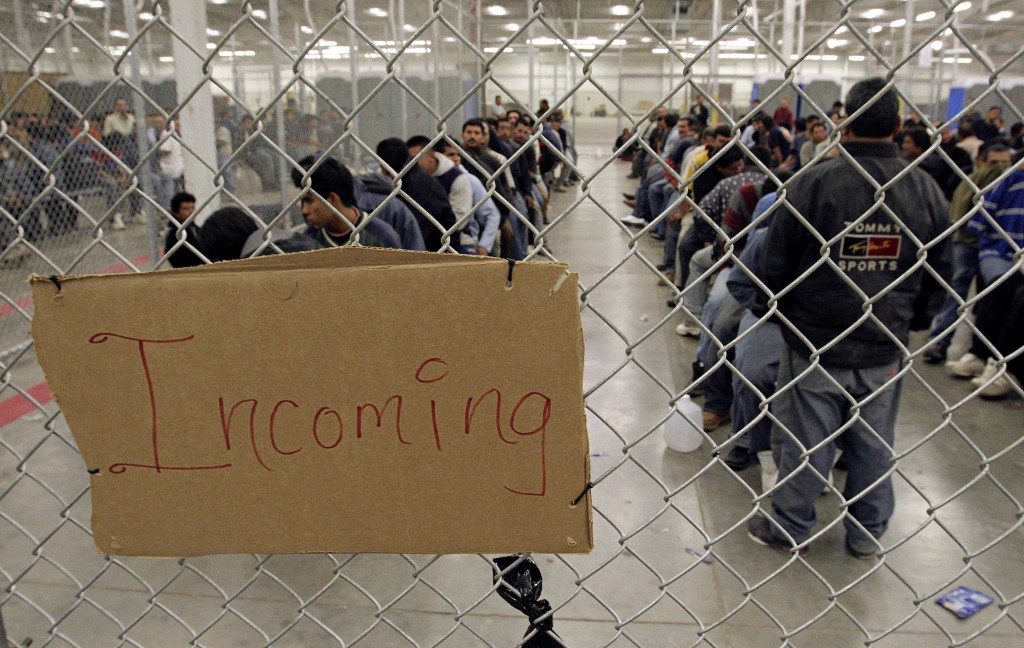 Get in line. (Reuters/Jeff Topping)

As a human rights activist back in the Central African Republic, Patrick used to get threatening phone calls, telling him he had a reservation at the cemetery. But the apprehension he felt then was meagre, he says, compared to the anxiety of being an asylum seeker in the United States.

In October 2010, after being kidnapped and tortured by CAR government forces, Patrick flew to the United States on a tourist visa and applied for asylum. He would spend the next six years of his life in bureaucratic limbo, unable to find a permanent job, enroll in graduate studies or see his family—one of hundreds of thousands of cases stuck in the US immigration court system.

This summer, the backlog of pending cases in the system passed half a million. It is the most that US immigration courts have ever faced. As of July 31, 502,976 immigration applications were waiting to be heard, according to the Justice Department’s Executive Office for Immigration Review (EOIR), which oversees federal immigration courts. The average wait time for an immigration court petitioner is currently two years.

There are several reasons for the backlog: Violence in Central America has driven up illegal border crossings. Ramped-up US border enforcement is producing higher numbers of arrests that require adjudication. And for years, courts have been understaffed and underfunded, struggling to keep pace. All kinds of cases are now waiting to be heard, including people who entered the US legally and applied for asylum, and illegal immigrants who are afraid to return home.

The problem of “rocket dockets”

Violence and gang warfare in Central America have played a notable part in the United States’ swollen immigration system. The number of people crossing the southwest border illegally has risen dramatically since 2014: Nearly 100,000 unaccompanied minors arrived in the US from El Salvador, Guatemala, and Honduras between Oct. 2013 and July 2015 alone, according to the Council on Foreign Relations. Speaking to Congress in Dec. 2015, EOIR director Juan P. Osuna, said that this border surge had put ”unprecedented pressure” on courts.

In July 2014, the US Justice Department decided address the problem by prioritizing cases of unaccompanied minors and families from Central America, scheduling them ahead of those already on the docket. But the so-called “rocket dockets,” meant to allow the speedy adjudication of cases, made wait times for non-priority cases worse. Meanwhile, the people whose cases were pushed forward are often unprepared, and sometimes lack time to find legal representation.

A broader US attempt to stop illegal immigration by ramping up security has also sent more people into underfunded immigration courts. Immigration courts’ booming backlog really started to take off in 2008, thanks to a federal dragnet program called Secure Communities. The program, which ran from 2008 to 2014, alerted the Department of Homeland Security anytime a local police department arrested an illegal immigrant, feeding many into immigration courts.

From 2003 to 2015, combined spending by border enforcement agencies US Customs and Border Protection (CBP) and Immigration and Customs Enforcement (ICE) rose 105%, according to the American Immigration Council. Meanwhile, immigration court spending rose only 74% in the same period.

Strengthening enforcement, while a politically popular solution and a mainstay of Donald Trump’s immigration policy, is ineffective without concomitant investment in the court system.

Over the past five years, more than 200,000 cases were added to US immigration court queues nationwide. But the number of judges available to hear cases plateaued between 2011 and 2014, mostly due to a Department of Justice hiring freeze.

Today, a record 277 immigration judges are currently hearing cases nationwide, according to EOIR representative Kathryn Mattingly. The department is currently authorized to hire up to 374 more judges, and has 100 candidates at various stages of the recruiting process at the moment. But that may not be enough—according to advocacy organization Human Rights First, it would take 524 judges to clear the system’s backlog within a year.

Mounting caseloads can hinder judges’ ability to do their jobs. “The consequences when someone is seeking asylum are life and death,” said Judge Dana Leigh Marks, a San Francisco immigration judge and president of the National Association of Immigration Judges. “The judge has a responsibility to apply the law correctly. But we are forced to do this in such a rapid fashion and with so few resources, that it’s more like a traffic court setting.”

As Quartz previously reported, immigration judges have a higher burnout rate and traumatic stress than prison wardens and busy hospital doctors. Year after year, the pressure has prompted some judges to retire early, making the problem even worse.

Today, an immigrant must wait an average of 676 days to appear in court—more than double what he or she would have waited in 1998. The nearly two-year waiting period can weaken a case: Circumstances change, witnesses may disappear, records can be lost, and funds run out.

American politicians on both sides of the aisle have criticized the delay. Republican congressman John Ratcliffe from Texas called it “de facto amnesty,” that allows illegal immigrants to remain in the country and put down roots, while waiting for a decision. But as Democratic congresswoman Sheila Jackson Lee has argued, slow paperwork also makes it difficult for people to work, study or or reunite with their families while they wait.

Even worse, illegal immigrants who appear to be flight risks, are unable to pay a bond, or have committed certain crimes can end up spending those years in detention. Images from Arizona immigration detention centers publicly released on Aug. 18 show detainees sleeping crammed in small rooms with bare concrete floors. An August report by Human Rights Watch also revealed subpar medical care, allegedly linked to the deaths of some detainees.

Delays in immigration paperwork can harm individuals’ mental health, according to an April 2016 report (pdf) by Human Rights First 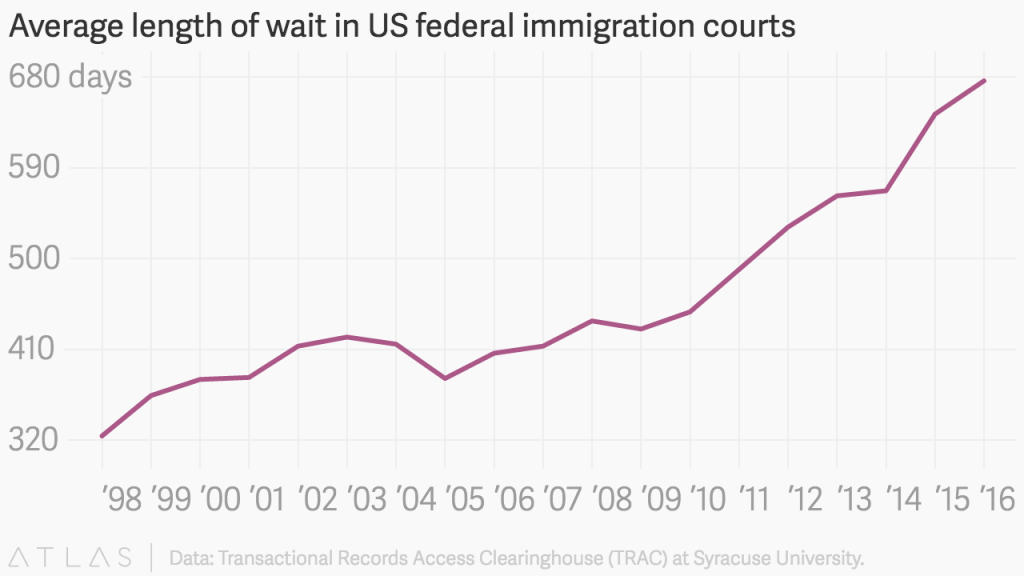 Patrick’s wait has been punctuated by repeated trips to lawyers’ offices and courtrooms. In 2014—four years after arriving in the United States—he finally got an appointment at the court, only to to be told in the waiting room that the judge was was sick and would see him another day. That appointment was rescheduled for two years later, in Jan. 2016.

With his temporary work authorization, Patrick has passed the time hauling food carts, washing dishes in a restaurant, parking cars as a garage attendant, and teaching other refugees how to use the subway or visit a museum. He has also been volunteering at Amnesty International, researching human rights violations in central Africa.

Being away from his family was the hardest part of the wait, he says. When his father passed away in the CAR, he was unable to travel to attend the funeral or mourn with his family, and found it difficult to process his father’s death.

After six years, Patrick was finally approved for asylum in January this year. But frustratingly, he will not receive his green card until 2017. “It’s not in my hands. That’s the system,” said Patrick. “I spent all these years just waiting, waiting, waiting—instead of moving forward. But time is passing, life is not waiting.”

Patrick’s name has been changed at his request.