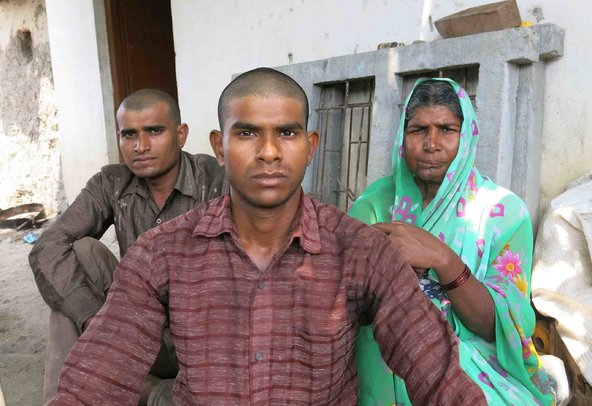 DHANORA, India — In this sleepy village in eastern Maharashtra, about 50 miles south of Nagpur, the sense of desperation is palpable. The dirt road that leads to the village passes through desolate fields, where the winter plantings of cotton, soybean and legumes have been ruined by unseasonal rains, harsh winds and an unusual hailstorm that hit this state and several others in February.

In all, 28 districts of Maharashtra have seen crop devastation this winter, adding to the misery of farmers who were already struggling to cope with the impact of severe droughts in 2011 and 2012. Vinayak Deshmukh, technical officer to the state’s commissioner of agriculture, said about two million hectares of farmland in Maharashtra were affected, and local news reports estimated the damage to state crops amounted to about 50 billion rupees, or $829 million.

For Bhagwanta Haribhar Mahajan, a 60-year-old farmer from Dhanora in the Vidarbha region who was already $7,500 in debt after his wife’s mouth cancer treatments and previous loans, seeing 80 percent of his soybean crops destroyed was too much to bear. He was already having trouble paying his debt, which was equivalent to three years of income.

When Mr. Mahajan failed to return home from the fields late last month, his son, Pramod Bhagwant Mahajan, set out with a flashlight and neighbors to search for him. They were nearly giving up hope when they spotted a towel and pair of slippers set neatly by a well in a field. A short while later, his father’s body emerged from the well, his legs bound together with rope.

“I never thought he would take this step,” said Mr. Mahajan, 29, a tall, stocky man with a look of steely determination in his eyes. “Perhaps if this year our crop hadn’t been ruined, maybe this wouldn’t have happened.”

Since late February, 156 farmers in the state have committed suicide, according to Kishor Tiwari, president of the Vidarbha Jan Aandolan Samiti, a farmer activist group. Compared with the state’s population of 112 million, the number of farmer suicides is a statistical blip, but the issue of farmer suicides is an emotional one in a country where 70 percent of the population depends on agriculture as a livelihood and where farmers are far more likely to kill themselves compared with the rest of the population.

In an election year, each farmer’s death takes on an outsize importance. In the past, Maharashtra’s small farmers have reliably voted for the Indian National Congress in the state, where it has a governing alliance with the Nationalist Congress Party, and in national elections, helping it retain control of New Delhi in 2009. But the party’s rivals are tapping into the frustration felt by members of this voting bloc.

On the same day the elder Mr. Mahajan committed suicide, Narendra Modi, the opposition party’s candidate for prime minister, criticized the government’s agrarian policies at a gathering of farmers in the Vidarbha region.

Meanwhile, some farmers in the Vidarbha region are threatening to exercise the “none of the above” option on the ballot, which is being offered for the first time in the national elections. Most areas in Vidarbha will vote Thursday in the first of the three-phase elections in Maharashtra.

Ramdas Jagganath Kaye, 74, a farmer in Dhanora, said all of the villagers were resolved to pick none of the candidates on the ballot. “None of these politicians are capable of running the government,” he said.

Across the region, farmers expressed frustration with the false promises made by politicians courting their vote. “These politicians, no matter what party, are only seen in this region when the time comes to vote,” said Sudhir Chaple, 42, a farmer in Dhanora whose crop was damaged by the rain and hailstorm. “Otherwise, it’s been five years we haven’t seen their faces around here. They say, ‘We will do this, we will change that,’ but then years pass by and everything remains the same.”

The ruined crops could also contribute to higher food prices, which was one of the chief reasons for the Congress party’s defeat in state assembly elections last year. Mr. Deshmukh, the technical officer to the commissioner of agriculture, said that state residents were likely to pay more for grapes, pomegranates, mangoes,  legumes, sorghum and wheat and that nationally there would be a price increase in sorghum and legumes because of the shortage. 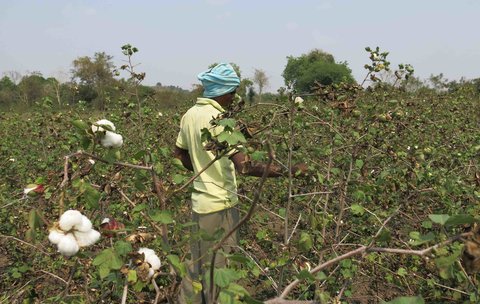 A farmer working in a cotton field in the Vidharba region of Maharashtra.Credit Neha Thirani Bagri

On March 20, a meeting of ministers of the central government decided that the National Disaster Response Fund would provide $143,000 to Maharashtra for damage to crops from the rains and hailstorm, according to reports from The Press Trust of India. The agriculture ministry did not respond to repeated requests for comment.

Mr. Deshmukh said that the state had decided on a relief program that would provide assistance only to farmers who had suffered over 50 percent crop damage. He said the government would pay a one-time monetary compensation of $416 per hectare for land under horticulture, $250 per hectare for irrigated land and $166 per hectare for nonirrigated but cultivated land used for field crops. The state would waive the interest on crop loans worth a total of $44.45 million and clear electricity bills worth $33.17 million.

The distribution of aid was delayed because the state government had to seek special permission from the Election Commission to avoid the appearance of bribery in the period before the elections. However, activists in the Vidarbha region said that the money allotted to farmers rarely reached them and that when it did, it was often insufficient to cover the cost of seeds and fertilizers used on the land.

Any aid, however, would come too late for Mr. Mahajan’s family. Renutai Bhagwant Mahajan, 50, the wife of the dead farmer, still needs to visit doctors after having surgery while she struggles to make ends meet and wonders how the family will repay their debt to private moneylenders.

“All our money went into the operation, but I am still sick and he is gone now,” said Ms. Mahajan, 50, with a slight grimace on her face.

A tall, strapping man, the elder Mr. Mahajan was friendly and well liked by his neighbors, but as his worries gnawed at him, he lost weight and became withdrawn, his family said.

“My father had enjoyed a lot of success in his life,” said the younger Mr. Mahajan. “He had been able to buy two tractors and send two of his three children to college. But now everyone’s fields are ruined, and there isn’t much work for the tractors.”
Published on April 9, 2014 in The New York Times India Ink.

Previous post
Red Tape Snarls Projects in India
Next post
In Bihar, Economic Concerns Are Tied Up in Caste Politics