The Rape Suspect Who Slept on Sidewalks 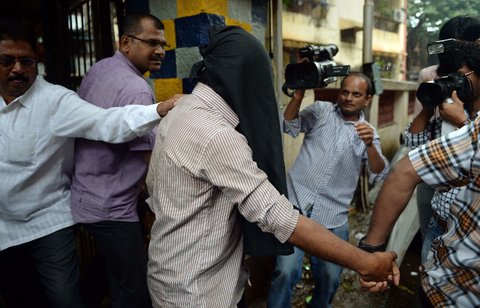 Police officers in plain clothes escorting one of the five suspects, center, in the gang rape of a photojournalist in Mumbai, Maharashtra on Monday.Credit Punit Paranjpe/Agence France-Presse — Getty Images

Not far from the abandoned mill where a 22 –year-old photojournalist was raped last week in Mumbai is a street lined with ramshackle structures built with corrugated iron sheets and covered in blue tarpaulin. Before his arrest on Saturday, Vijay Jadhav, 19, one of the five suspects in the case, lived here in a slum at Jivraj Ramji Boricha Marg in the Lower Parel neighborhood, where he was frequently found sleeping on the pavement.

The road is adjacent to the Arthur Road Jail and just across the street from Kasturba Hospital. In the monsoon downpour, the gutters overrun and sewage water fills the street in front of the peeling storefronts. In the narrow streets within the slum, women wash their vessels on the street while their children play nearby. Most of the men in the area clean houses and offices, while the women work part time as domestic help in the upscale apartment buildings coming up in the neighborhood.

There are small storefronts selling clothes, tires, chicken, and vegetables. During a recent visit to the neighborhood, a game of cricket on the sidewalk was interrupted by a sudden downpour, and children huddled under the plastic sheets, hiding from the rain. A group of young men sporting jeans and listening to music from a mobile phone was loitering in front of a cigarette shop, smoking and chatting. Most of them have dropped out of school and work as cleaners, rag pickers or unskilled labor.

Like many of the families in this area, Mr. Jadhav’s home was demolished when Lokhandwala Construction redeveloped the settlement a few years ago. The building, which looms large over the settlement, is as yet incomplete.

“His house was broken during the redevelopment, and they sold the flat that they got under the slum redevelopment scheme,” said Sachin Madgaokar, who lives in the neighborhood. “His parents had rented a flat elsewhere, but he did not move with them. I saw him sleeping on the streets here very often.”

When the slum was demolished nearly six years ago, most of the families moved to the suburbs of Mumbai, like Mr. Jadhav’s parents, but they still continued to frequent their old neighborhood because their work was there. Once the redevelopment project is completed, former slum residents are expecting to be given flats in the building under the government redevelopment program, which they say should happen within a year.

Many parts of the Lower Parel neighborhood of Mumbai, once a hub of textile manufacturing and working-class housing, are being redeveloped. The skyline is dotted with construction cranes, and several high-end shopping malls, luxury apartment buildings and offices have sprung up in the area. In stark contrast, there are many pockets of dilapidated slums that lack even the most basic infrastructure.

Mr. Jadhav’s family continued to visit the area for work even after they moved to Virar, about 45 miles away. They were well liked by their former neighbors. “His father works in the municipal corporation and is a very good man,” said Daya Rawal, who lives in an apartment building on the same street as the Jadhav family’s former home and frequently saw Mr. Jadhav in the neighborhood. He added that the young man’s mother went to people’s homes to wash clothes and do their dishes.

Mr. Jadav’s two brothers were also seen often in the neighborhood. “One of his brothers works selling secondhand clothes at a mill nearby, and the other used to work before he lost his hand in a railway accident,” said Rajesh Patil, one Mr. Jadhav’s peers who live in the settlement and met frequently with Mr. Jadhav. “He alone in his family was a little off.” He added that Mr. Jadhav’s family was not well off and was struggling to run their household.

However, after Mr. Jadhav’s arrest, residents of the area haven’t seen any of his family members. At the mention of his name in the neighborhood, young men gather around and shake their heads. “I hope he gets what he deserves,” said one young man, who wished to remain anonymous. “He has gone and done such a horrific thing.”

They said that since the arrest, the neighborhood has been swarming with police officers, and the men who were friends with Mr. Jadhav have been scared to be seen in the area. “There are many people who know him here, but now out of shame everyone will deny it,” said Mr. Madgaokar.

Mr. Jadhav, who was arrested early Saturday morning at a video game parlor in the nearby Madanpura neighborhood, did not have a good reputation, his neighbors said.

“He was very young but was mixed up in the wrong kind of crowd,” said Mr. Madgaokar. “They were often found drinking and making trouble.” Mr. Rawal said that the young man had been involved in several petty thefts and had been caught by the police several times previously.

The Times of India, citing unnamed sources, reported Monday that Mr. Jadhav had confessed he and his friends had gang-raped women before, threatening to release video clips and photos of the victims if they reported the crime.

The Mumbai Police commissioner, Satyapal Singh, said at a news conference on Monday that the police had no evidence that Mr. Jadhav or the other suspects had committed rape before and that no previous charges of rape had been filed against them. Mr. Singh said that one of the suspects had taken a photograph of the victim but that the police found the photo had been deleted when they seized the phone.

The police commissioner denied local reports that one of the suspects was a minor, saying that he was 17 when the police arrested him in 2011. Mr. Singh said a bone ossification test would be performed to confirm the suspect was an adult.

Mr. Singh said three of the five suspects had criminal records and all five of the Mumbai natives were unemployed. Mr. Jadhav’s former neighbors confirmed that after having dropped out of school, Mr. Jadhav did not work and was often seen roaming the streets in the neighborhood in the evening with his friends. Mumbai police officials say Mr. Jadhav had previously been arrested on charges of breaking into a house and petty theft.