Private Schools for Poor Pressured by Right to Education Act

MUMBAI — In Dharavi, a Mumbai slum, a  ramshackle building houses the Bombay South Indian Adi-Dravida Sangh school, where 1,000 students from poor families take their classes in English, a language increasingly perceived as the key to a white-collar job.

Tuition at the school is 400 rupees, or $6, a month, which represents about three days’ pay for the students’ parents, but they’d rather send their children here rather than to the free local public school because the quality of education is better. “We want our children to fare well, but we don’t have the capacity to put them in schools with very high fees,” said P. Ganesan, who stitches clothes at a garment factory nearby.

However, this school is in danger of being shut down because of the Right to Education Act, introduced by the Indian government in 2009. The landmark legislation, which mandated free and compulsory education for all children from the ages of 6 and 14, ordered all schools to have infrastructure like a playground and separate toilets for boys, among other requirements, by March 31.

The two-floor structure that houses the Bombay South Indian Adi-Dravida Sangh School is topped by a corrugated iron roof and lacks a playground, sports equipment and a ramp for disabled children, which are all required under the law. While the school has a library, the teachers complained that it is understocked. Of the seven computers in the school’s computer room, only one is in working condition

Many education experts argue that the Right to Education Act, while lofty in its goals, does not pay attention to the ground realities of low-budget private schools. In a study of 15 budget private schools in New Delhi by the Center for Civil Society, it was found that to comply with the infrastructure requirements in the Right to Education Act, the schools would have to have an approximately four-fold increase in their fees, making them unaffordable for the section of society they currently serve.

The Bombay South Indian Adi-Dravida Sangh School is undergoing some renovations, putting up concrete walls between classrooms and adding a second floor, but it doesn’t have the funds to make all the changes required by the Right to Education Act.

“The R.T.E. regulations are good for students, but it is difficult to collect funds for the renovation because the fees are so low,” said Devraj Natarajan, treasurer of the board of trustees at Bombay South Indian Adi-Dravida Sangh School, referring to the legislation.

If these schools are closed because of the government’s regulations, many poor children may never find another place to learn, said Mari Arunachalam, the school’s principal. “Many parents who are not educated will let the children drop out of school and send them to work instead,” she said. “The children’s future will be spoiled — that should not happen.”

Schools that fail to comply with infrastructure regulations, which are enforced by the state governments, risk being either shut down or being forced to pay a hefty fine. “There are nearly 300,000 budget private schools across the country with an estimated 15 million students, almost all of which will not be able to fulfill these norms,” said Shantanu Gupta, senior coordinator for advocacy at the Center for Civil Society.

Though public schools generally have better infrastructure than the low-cost private schools, they have a higher level of teacher absenteeism than their private counterparts, and English is not usually the medium of instruction. A survey of rural schools across India by the nonprofit ASER Center, published in 2012, showed that basic skills like reading and math were better among children attending private schools compared to those at public schools.

“In some places, parents are choosing to put their children in private schools because they feel that their children are not learning in public schools,” said Madhav Chavan, co-founder of Pratham, a nonprofit that works with primary school children. “The number of children attending these schools is growing each year.”

Experts in the field of education say that the emphasis on a school’s infrastructure does not take into account the learning outcomes of that school. “Infrastructure is really nice to have, and every child deserves to have access to good facilities, but it isn’t critical to actually getting an excellent education,” said Shaheen Mistri, the chief executive at Teach for India. “Measuring outcomes is significantly smarter than measuring inputs.”

She added that one solution might be to move toward making it necessary for children to have access to resources like a playground, rather than insist that each school builds one.

The critics of the Right to Education Act’s infrastructure requirements are not advocating that children take classes in unsafe conditions, but they say it is unfair to expect the schools to comply with the law in such a short period of time. Also, they point out, public schools that lack infrastructure will be subsidized by the government to make the necessary changes, while private schools will have to come up with the money on their own.

“The norms set down by the government are good, and in the long term it might push school authorities to provide better infrastructure,” said Ms. Arunachalam. “In the meantime, shutting down schools providing education to children who have less means is not the answer – they should give us time and help us.”

As schools across the country start to be inspected by their state education departments, education authorities are worried that this will make schools more vulnerable to bribery attempts by government officials.

“The inspection officers are not interested in helping the school fulfill the norms; they are looking for ways to find mistakes,” said Kishan Gangaram Vasala, president of the board of trustees for the Geeta Vikas Mandal, a budget private school in Govandi, a neighborhood in Mumbai. “They often threaten to shut down schools for not fulfilling the R.T.E. norms unless they are given bribes.” 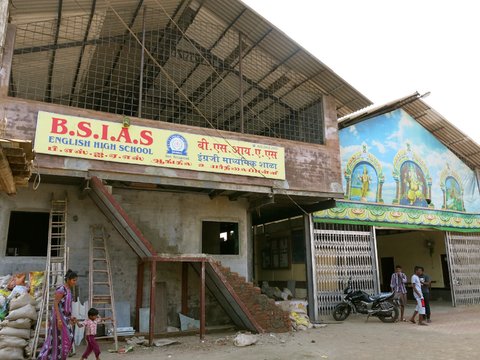 The Bombay South Indian Adi-Dravida Sangh School in Dharavi in Mumbai, Maharashtra. The second story of the school is presently under construction.Credit Neha Thirani Bagri

The Mumbai city government has asked the state government to relax some of these requirements, said Manoj Kotak, chairman of the education committee of the municipal corporation that runs Mumbai. “There is a difference between implementing the Right to Education Act in other parts of the country and in a thickly populated city like Mumbai,” he said. “The scarcity of space and infrastructure makes it nearly impossible for schools that have been running for many years to fulfill these criteria.”

The western state of Gujarat has taken a flexible approach in enforcing the Right to Education Act, offering a possible alternative for other states to adopt. As per the Gujarat state government’s rules, the efficacy of a school is measured as the weighted average of four parameters: 70 percent is given to absolute and relative levels of student learning outcomes, 15 percent is given to nonacademic outcomes like sports and 15 percent is given to school factors like facilities and teacher qualifications.

While it remains unclear whether budget private schools that are not able to fulfill the infrastructure requirements will be allowed to remain open, the future of their students is uncertain.

“A nice classroom and facilities are important, but here in Dharavi there is less space so we make the most of what there is,” said Faiyaz Ahmed, 14, a student at the Bombay South Indian Adi-Dravida Sangh School whose family moved to Dharavi from the northern state of Uttar Pradesh.

He dreams of some day owning his own software company, like his idol, Narayana Murthy, the founder of the outsourcing giant Infosys. Faiyaz’s father is a mechanic and would like his son to take his studies further than he was able to.

“The teachers in a school are important,” said Faiyaz. “The building doesn’t matter.”

Published on January 4, 2014 in The New York Times India Ink.