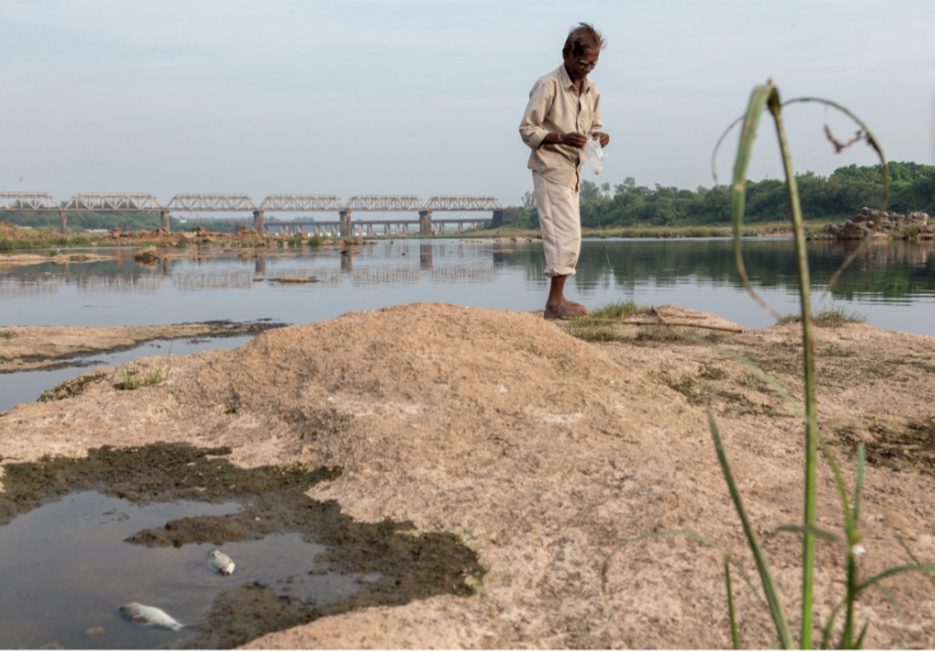 A fisherman on the banks of the Daman Ganga River. Credit Graham Crouch for The New York Times

VAPI, India — They finally got some good news in early June, about two weeks after Narendra Modi was sworn in as prime minister. The new officials at the ministry told them that the pollution index would be revised — and in the meantime, Vapi’s chemical and pesticide factories were again free to expand, and to snap at China’s share of the global chemical export market.

Rightly so, said Harshad Patel, standing outside the plant where he works. The air had an acrid-sweet smell, and reddish-brown effluent was gushing from a treatment plant down the road at a rate of 55 million gallons a day into the Daman Ganga River, but Mr. Patel looked untroubled. “Clean India is fine — we also like clean India,” he said. “But give us jobs.”

Indian industries have often complained that convoluted environmental regulations are choking off economic growth. As a candidate, Mr. Modi promised to open the floodgates, and he has been true to his word. The new government is moving with remarkable speed to clear away regulatory burdens for industry, the armed forces, mining and power projects.

More permanent changes may be coming. In a report made public last week, a high-level committee assigned to rewrite India’s environmental laws assailed the existing regulatory system, saying it has “served only the purpose of a venal administration” seeking to extract bribes.

To speed up project approvals, the committee recommended scrapping a layer of government inspections; instead, it said, India should rely on business owners to voluntarily disclose the pollution that their projects will generate and then monitor their own compliance, an approach the committee described as “the concept of utmost good faith.”

Environmentalists are worried that the new approach will go beyond cutting red tape and will do away with effective regulation altogether. 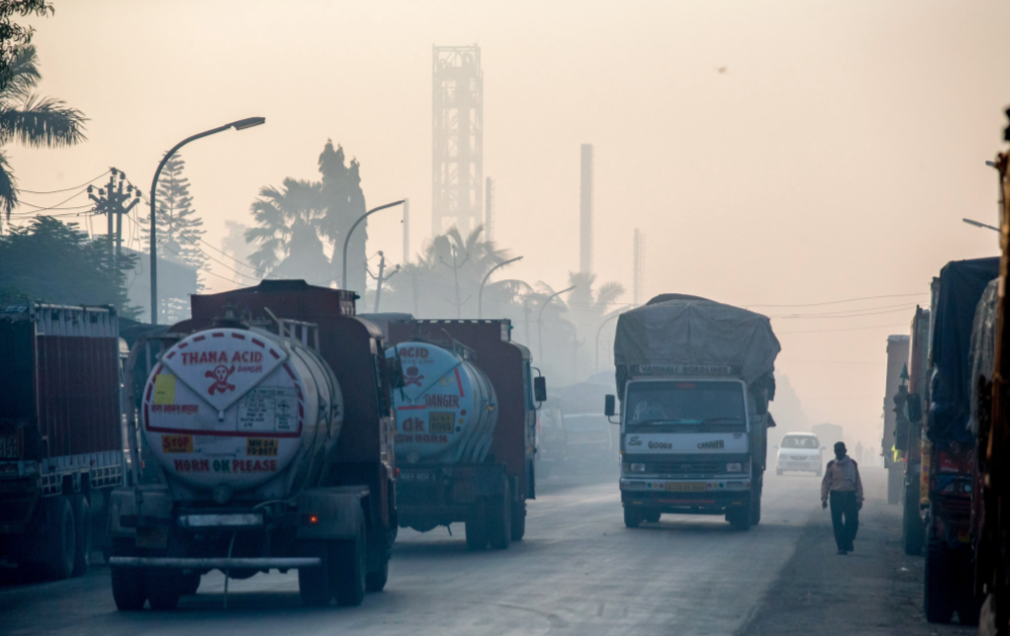 “If you’re building something like a brewery or a dam, faith is the last thing you want to think about,” said Leo Saldanha, coordinator of the Bangalore-based Environment Support Group. “Do you have ‘utmost good faith’ in enforcing income tax, or corporate tax law? No. This is a territory on which the government wants to be weak — because they want growth.”

Mr. Modi’s new government did inherit cumbersome regulations. The environmental activist Sunita Narain, in a recent article, described a system in which “the same project had to be cleared by five to seven agencies,” not one of which monitored compliance. Industrialists complained that corrupt inspectors made the rounds with their hands out, and that corrupt bureaucrats sat on files that were lined up for approval, waiting for bribes.

Mr. Modi’s new environment minister, Prakash Javadekar, made it clear that speedy clearances would be the order of the day. The newly appointed National Board for Wildlife, which must approve projects in and around protected areas, plowed through 140 pending projects during a two-day gathering in mid-August. One member said they worked at a rate of 15 to 30 minutes per file.

More significant, activists say, were the raft of regulatory changes and dilutions that followed. Smaller coal mines were granted one-time permission to expand without holding a public hearing; projects in forests will no longer have to seek the approval of tribal village councils; smaller mining projects of less than 100 hectares (247 acres) will no longer undergo ministry inspection. Several categories of projects will be allowed to proceed as soon as they receive clearances from state bodies.

“We have decided to decentralize decision-making,” Mr. Javadekar said. “Ninety percent of files won’t come to me anymore.”

He said the new government was not phasing out important environmental protections, just “those which, in the name of caring for nature, were stopping progress.”

Environmental activists are alarmed at the plan to devolve power to state regulators, in part because state chief ministers have powerful incentives to support industry. “It would be a rubber stamp, because the chief minister would just call the pollution control guy and say, ‘clear it,’ ” said Jairam Ramesh, who served as environment minister under the previous national government. “In the state, the chief minister is the king, he’s the sultan.”

Few places embody the tensions between regulators and industry as starkly as Vapi, where around 800 factories — mostly small ones — produce dyes, pharmaceuticals, pesticides and other chemicals and employ about 80,000 people. For decades the factories simply dumped caustic byproducts and waste into open ditches; when pressure mounted in the 1990s to clean up the mess, they banded together to build an effluent treatment plant.

But while the effluent plant has improved matters somewhat, Vapi is still polluted. Downstream from the plant, the riverbanks are abandoned and villagers said their old fishing grounds were useless. Acrid fumes settle thickly in the area early in the morning, making it difficult to breathe. Ask business leaders here about pollution, though, and they bristle, arguing that the government inspectors’ sampling is faulty. “People talk as if you go to Vapi and you can’t breathe, your lungs are damaged,” said Rajju Shroff, chairman of one of India’s largest pesticide manufacturers. “It’s all lies. People are nice and healthy in Vapi. There is no problem at all.” 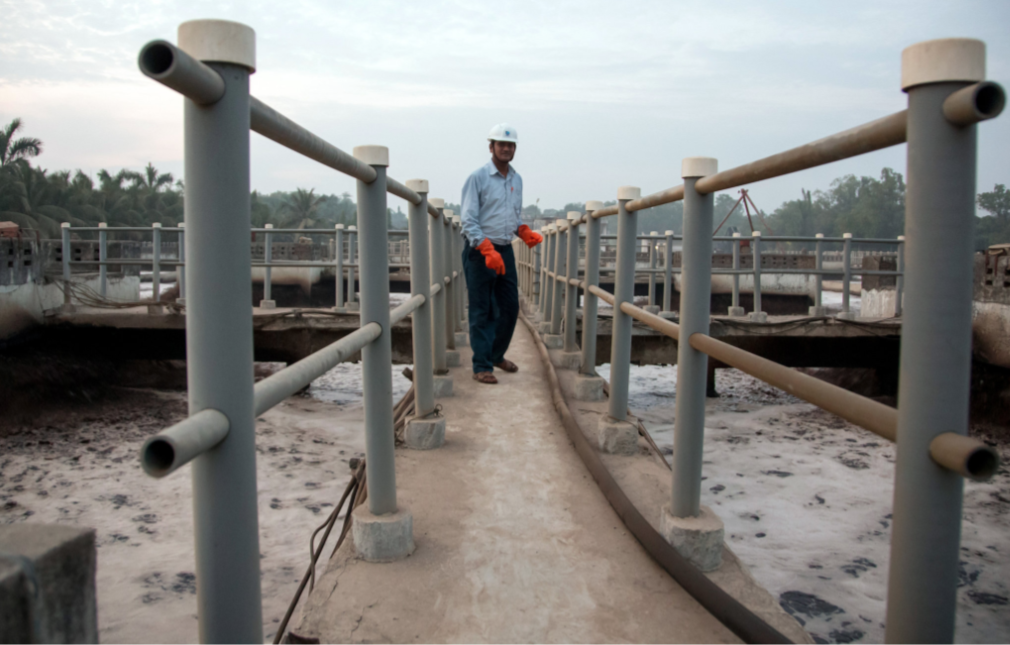 A waste treatment plant in the city. Credit Graham Crouch for The New York Times

Regulators say it is nearly impossible to police the country’s many small manufacturers. In frustration, Mr. Ramesh imposed a total ban in 2010 on industrial growth in 43 areas that the Central Pollution Control Board said were the most polluted in India. Vapi was at the top of the list.

“That was the only way I felt I would get these guys to act,” he said. “Enforcement was weak, the penalties were very weak, and there was no visible deterrent penalty for noncompliance.”

The moratorium did impose pain on businesses in Vapi, forcing abrupt cancellation of planned expansions. But it did not lead to any significant reduction in pollution levels, at least according to the control board, which renewed the ban last year.

The general election in the spring, which replaced a Congress-led coalition government with Mr. Modi and his Bharatiya Janata Party, seems to have changed all that.

During a recent visit, the Vapi Industries Association was an upbeat place. A copy of the magazine Corporate India was on display, with the headline “The Light at the End of the Tunnel.”

Mr. Shroff said he was sure that business owners would invest in the equipment necessary to monitor their own pollution levels, as envisaged in the government’s new “utmost good faith” policy. Or at least, the ones who could afford it would.

“The problem is, 90 percent are good, and 10 percent are difficult to convince,” he said. “It is human nature to cheat, to do something to save the headache.”

Published in print and online, The New York Times; December 4, 2014.