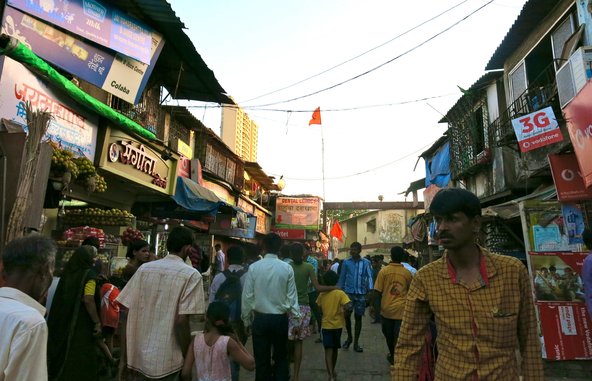 A view of Ambedkar Nagar, a slum in south Mumbai.Credit Neha Thirani Bagri

MUMBAI, India – The slum dwellers who make up 60 percent of this city’s 18 million people are too diverse to vote as a bloc, but they all have one thing in common: their cramped homes, which usually lack running water and electricity.

For that reason, the redevelopment of the various clusters of decrepit shanties dotting the city and the transfer of slum dwellers into state-provided housing have become familiar election-year promises increasingly viewed with skepticism by local voters, who headed to the polls on Thursday to choose the next members of the Lok Sabha, or lower house of Parliament.

The three major political groups in Mumbai — the Indian National Congress-Nationalist Congress Party alliance, the Shiv Sena alliance with the Bharatiya Janata Party and the fledgling Aam Aadmi Party – have all pledged to help get slum residents into better homes.

“No political party can afford to ignore the issues that concern slum dwellers because of their sure number and the fact that whether it is municipal elections or Lok Sabha elections, it is usually the poor who come out to vote,” said Simpreet Singh of the Ghar Bachao Ghar Banao Andolan, an activist group dedicated to protecting the rights of slum dwellers. “While all the political parties pay lip service to slum dwellers in their campaigns and manifestos, hardly anything concrete comes of it.”

On March 1, the Maharashtra State Assembly, which is dominated by an alliance between the Indian National Congress and the Nationalist Congress Party, passed a bill that gave 400,000 additional families the chance to move out of the slums and into free government housing. The bill had been promised by the Indian National Congress, which leads the governing coalition in New Delhi, in the 2004 and 2009 state elections but then was shelved for a decade.

The new measure made more slum dwellers eligible for an existing government housing program, which was created in 1996 to fulfill a campaign promise that the Shiv Sena-B.J.P alliance made to the four million residents in the city’s slums. Under the original program, only those who had lived in Mumbai before 1995 qualified for the program, but now any slum dweller who was in the city before 2000 can get a new home.

Under the program, once the Slum Redevelopment Authority has the agreement of 70 percent of the residents of a community, it can begin to redevelop the slum. Redevelopment is carried out through a private company, which receives free government land to build apartments of 25 square meters, or 270 square feet. Half of the apartments must go to the slum dwellers, and half of them can be sold by the developer for profit.

Activists and urban planning experts say the current approach to slum redevelopment amounts to political tokenism and only maximizes the profits of private developers.

“The cut-off policy belongs to an overall approach to politics and slums that is arbitrary and keeps one section of people vulnerable and dependent upon favors and electoral promises,” said Amita Bhide, the chairwoman of the Center of Urban Planning, Policy and Governance at the Tata Institute of Social Sciences in Mumbai.

A better alternative would be a program led by the state government that required slum residents to contribute financially to their new homes, she said.

The projects that have been completed are often untenable, urban planning experts said, because they are on the periphery of the city, far from residents’ jobs and communities.  “You cannot wish away the slum dwellers from the city – you need to try to integrate them into the urban fabric at large,” said Mustansir Dalvi, professor of architecture at the Sir J.J. College of Architecture in Mumbai.

Shamlal Kanojia, 43, and his wife, Neelam Kanojia, at their home in Ambedkar Nagar, a slum in south Mumbai.Credit Neha Thirani Bagri

The Aam Aadmi Party, which is new to Mumbai’s political scene, is gaining popularity among slum dwellers because of its focus on these neighborhoods, fielding candidates like Medha Patkar, an activist who has worked with slum dwellers and has protested the demolition of illegal slums on many occasions.

In its manifesto for Mumbai released on April 11, the Aam Aadmi Party included a promise to increase the minimum size of an apartment in the slum redevelopment program from 25 square meters to 42 square meters and to include slum dwellers’ participation in the redevelopment. The party also supported granting all slums legal status, which would entitle them to free government housing, rather than only those built before 2000.

Despite the lofty promises of the current and previous state governments, only 153,000 slum dwellers have received their new apartments and only 13 percent of the planned projects have been completed since the program was initiated in 1996, according to local reports.

Other enticements are more immediate. “It is common for politicians of all parties to offer money, saris and alcohol to a few leaders in the slums, who distribute the money and gifts among the slum dwellers before the elections,” said Chandrashekhar, an architect and activist who goes by one name and who has been involved with several slum rehabilitation projects. “Slum dwellers accept the money and gifts willingly, then they vote for whoever they want to.”

Shamlal Kanojia, 43, who has lived in Ambedkar Nagar, a sprawling slum near south Mumbai’s upmarket Cuffe Parade neighborhood, since 1994, said he didn’t put much hope in government efforts to give people like him new homes. His family’s home is a five-square-meter room, whose crumbling blue walls are lined with shelves packed with steel vessels, clothing and bedsheets. To get there, they have to navigate a dingy sewage-lined lane and climb up a shaky iron staircase.

“Even the people who have been here since before 1995 and have been promised houses many years ago are still waiting for their new flats to be built,” Mr. Kanojia said. “Who knows how many years it will take for this new promise to bear any fruit.”

Most of the residents of the slum work as day laborers in the nearby dockyard, or as domestic help in the high-rises adjacent to the slum. Mr. Kanojia, a slight man with an earnest manner, is employed as a driver for a family that lives nearby and his wife, Neelam, works for the same family part time as a housekeeper. Together they make about $215 per month, which barely covers the expenses of raising their four children and monthly rent of $83.

Mr. Kanojia said that he had always voted for Congress, but this time he wasn’t sure. “I don’t know if anything will actually change,” he said.
Published on April 24, 2014 in The New York Times India Ink.