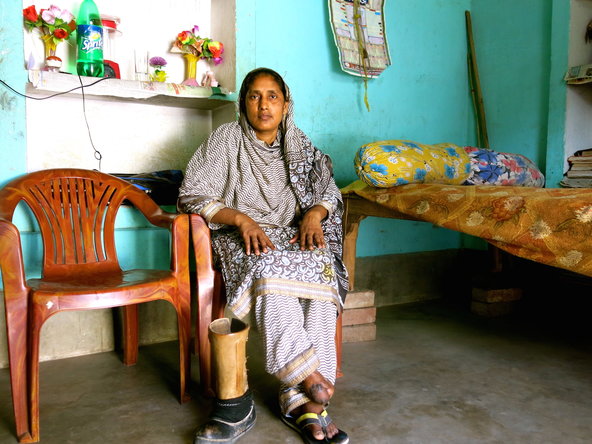 Mallika Begum, a survivor of the riots in Bhagalpur, Bihar.Credit Neha Thirani Bagri

BHAGALPUR, India – An eruption of religious violence in this district nearly 25 years ago, some of the worst that independent India has seen, weighed on the minds of Muslim voters as they prepared for Thursday’s vote.

This district, about 160 miles east of Patna, the state capital of Bihar, saw nearly 1,000 people killed in riots in October and November 1989, most of them Muslims. The carnage that spread to over 250 villages here was set off by a Hindu procession through the Bhagalpur district that was carrying bricks to build a temple at the site of an ancient mosque in Ayodhya, where Hindus believe the god Ram was born.

Mallika Begum was 14 when the riots broke out and her family and other Muslims sought sanctuary in a mosque in her village of Chanderi. On being promised protection by the Hindu village leaders, the Muslim families emerged from the mosque only to be surrounded by a Hindu mob, which severed her father’s head and pierced her mother with a spear.

When the mob came after her, Ms. Begum jumped into a small pond in the village where the attackers had thrown the bodies of their victims. She lay in the pond, her right leg having been cut off by a machete, watching as 65 Muslim villagers were killed with sickles, spears and machetes, their homes burned to the ground, their few possessions ransacked.

She was rescued by the army the next morning. She was her village’s only survivor. Later, she ignored threats and enticements to keep quiet and testified in court against 16 attackers, who were convicted.

The riots proved to be a turning for politics in Bihar, which was governed by the Indian National Congress party at the time. Lalu Prasad Yadav and his Rashtriya Janata Dal party won the 1990 state elections on a secular platform, securing the votes of Muslims and Yadavs, a caste community. However, in his years as chief minister, Mr. Yadav failed to prosecute the attackers and compensate riot victims.

In 2004, Nitish Kumar of the Janata Dal (United) party promised justice for the Bhagalpur riot victims as part of his campaign, and the next year, he ended the 15-year rule of the Rashtriya Janata Dal.

For the past two elections for the lower house of Parliament, voters in Bhagalpur have chosen Shahnawaz Hussain of the Bharatiya Janata Party, which was in an alliance with the Janata Dal (United) at the time. Muslims, who make up 20 percent of the district’s population of three million, have supported Mr. Hussain because of his party’s ties with the Janata Dal (United) and Mr. Kumar, who was seen as friendly to Muslim voters.

But this year, Mr. Hussain faces a tough re-election battle because his party’s alliance with the Janata Dal (United) ended last year. For Muslims in Bhagalpur, the reputation of the B.J.P’s candidate for prime minister, Narendra Modi, as a Hindu nationalist, and his handling of the 2002 religious riots in his home state of Gujarat, have given them pause.

“A person who has watched the effects of communal tension, whether in Gujarat or in Bhagalpur, would not want such a person to become prime minister who is implicated in any riots or would increase division between communities,” said Ms. Begum, who now works with the Center for Equity Studies to secure compensation and justice for the victims of the riots.

Two political camps have touted their secular credentials as they seek the Muslim vote: the Janata Dal (United) and a coalition of the Rashtriya Janata Dal, the Indian National Congress and the Nationalist Congress Party. However, Muslim leaders have urged their community to form a united front against the B.J.P.

Akhtarul Iman, the Janata Dal (United) candidate from Kishanganj, a Muslim-dominated constituency in Bihar, withdrew his candidacy to help the Congress candidate Maulana Asrarul Haque Mohammad consolidate the Muslim vote, calling it a “sacrifice” to a larger cause.

As chief minister of Bihar, Mr. Kumar, the leader of the Janata Dal (United), has made clear overtures to Muslims during his two consecutive terms since 2005. After taking office, he formed a commission to reopen the investigations into riot-related cases that were closed by the state police for lack of evidence. Since 2006, 39 cases have been reopened and continue to be battled in court.

A vehicle used for election campaign of Shahnawaz Hussain, the official candidate of the Bharatiya Janata Party from Bhagalpur. Mr. Hussain is one of BJP’s prominent Muslim leaders.Credit Neha Thirani Bagri

“Nitish Kumar has done a lot of good for the Muslims in Bihar, and people will back those who do good,” said Anisur Rahman Quasmi, secretary of the Muslim welfare organization Imarat Shariah in Patna. “He has worked for justice for the victims of the Bhagalpur riots, he has built boundary walls to protect Muslim graveyards, he has accorded government recognition to 2,400 madrasas and he has appointed an Urdu teacher in each of Bihar’s schools.”

The biggest move by Mr. Kumar that signaled his secular credentials was his decision to end a 17-year alliance with the B.J.P. in June 2013. But that might not be enough to draw Muslim voters in this year’s elections.

“The Muslim population would like to support the candidate who is likely to be able to defeat the Bharatiya Janata Party,” said Alakh Sharma, director for the Institute for Human Development in New Delhi, who tracks politics in Bihar. “While Nitish Kumar has a lot of good will among the Muslim community, since the general perception in Bihar is that the Rashtriya Janata Dal-Indian National Congress-Nationalist Congress Party alliance has emerged stronger in this election, Muslim voters might favor them.”

Ms. Begum said Mr. Kumar had not done enough to raise the victims’ standard of living. “Nitish Kumar has done some work, increased the pension, but with today’s prices – how is someone supposed to live on 5,000 rupees a month? This amounts to tokenism to appease people and say that something has been done.”

Choosing the right lawmaker was not about religion or caste, Ms. Begum said. “It is not important that the candidate is Muslim or Hindu; the person should be a good person,” she said.

“So many people have made so many promises to the people of Bhagalpur, but until today no one has fulfilled all their promises. It is now 25 years, and there are so many riot victims who are still struggling to make ends meet and feed themselves.”
Published on April 24, 2014 in The New York Times India Ink.