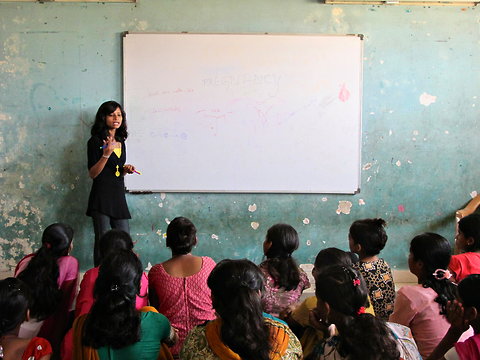 “There’s nothing to giggle or be shy about; there’s no shame in it. It’s important for us to learn about these things. Be totally bindaas(carefree) and ask me questions,” says Aparna Bhola, with a wide smile.

It’s a hot Sunday afternoon, but the stifling Mumbai summer air does nothing to curb the enthusiasm of the girls surrounding her. Aparna, a spunky 16-year-old, is in the midst of giving a group of her peers a candid sex-education class, and today’s topic is pregnancy. She leads the class confidently, dispelling superstitions with funny stories and apologizing disarmingly for her chalk drawing skills.

“What all do we need for life?” she asks the group of 15 teenage girls. “Food, air, water, but also sex. It is a natural instinct and something that brings us happiness.” 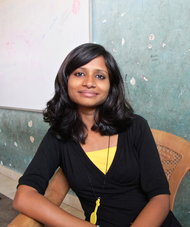 Aparna is member of a nongovernmental organization called Kranti, meaning “revolution,” which strives to give young women rescued from prostitution access to education and new opportunities. She was teaching the class as part of a partnership with an organization called Project Crayons, which runs a shelter for girls in Mumbai’s Malad neighborhood.

The girls at the shelter are unaccustomed to such candid conversations about subjects generally considered taboo in their communities. “We are all girls, so we should know about this because in the future we might be pregnant at some point,” said Haseena Sayyed, 16, who attended the sex education workshop. “Earlier, we used to think that when we get our periods, the blood that is there is dirty. But when you’re pregnant, that blood goes to your child, so it is not dirty; it is useful.”

The daughter of a sex worker, Aparna grew up in Kolkata. Her mother, Malti, was married when she was 9 and was beaten by her husband. When she ran away and returned to her hometown in the Sundarbans, her aunt took her to Kolkata under the pretense of sending her to school. There, Malti was sold into sex work for 10,000 rupees ($180 at current exchange rates) when she was 12 years old. When she initially refused to be a prostitute, the brothel owner stuffed chili powder in her genitals to force her into submission, says Aparna.

Eventually, Malti became a sex worker and moved with Aparna, who was born when Malti was 14 years old, to Kamathipura, Mumbai’s oldest red-light district.

Aparna remembers sharing a house with eight families in Kamathipura. She never worked in the sex trade, but she had very limited access to education and health services and became anemic due to malnutrition. Allowed to drink alcohol at a very young age, she became an alcoholic.

Growing up in red-light districts, Aparna says she was distressed by the way doctors routinely mistreated sex workers because of the stigma against their profession. Her mother, diagnosed with uterine cysts, was unable to get treatment for them because of the bias against sex workers. Aparna remembers a niece being refused treatment by a doctor who said he didn’t want to bother with such poor people.

When sex workers like Aparna’s mother would become pregnant, the “doctors would treat them so badly,” Aparna recalls. “They would yell at them, and even slap them sometimes. They would say things like ‘You go and pick up anyone’s child and come to me with your stomach swollen. When you were doing it, you enjoyed yourself and now what happened?’ ”

These encounters made Aparna want to become a gynecologist. Even when she was younger, she would share with her friends and peers whatever sexual health-related information she could find.

“I want to work with gynecology to cater to sex workers because I know the issues they faced,” says Aparna, her face set in a determined expression. “If I became a doctor, I could give whatever information the mothers need when they are pregnant. There would be someone to talk to them nicely when they are in pain.”

In July 2011, Aparna joined Kranti, where she attended school and received counseling and support. In an environment that encouraged open discussions and curiosity, she also learned about various social issues and was trained to teach sex education classes.

The organization was founded in 2009 by Trina Talukdar and Robin Chaurasiya with the aim of rehabilitating young girls from the red-light districts and bringing out their maximum potential. At any given time, Kranti has about 10 girls under its care. The group’s work has earned it awards from the Unreasonable InstituteFellowship, Youth Action Net, Opportunity Collaboration and Ashoka’s Youth Social Venture.

“We believe that these girls have the power to become tomorrow’s change makers because they understand better than anyone the ills plaguing society today,” says Ms. Talukdar. “They haven’t just read about the issues; they have experienced them firsthand.”

In the time that she has spent at Kranti, Aparna has stopped drinking, improved her English, gained confidence and branched out into a number of extracurricular activities. She just completed grade 11, and is working toward her dream of becoming a gynecologist. This year she will enter the 12th grade and is planning to take the entrance examinations for medical school.

She also represented Maharashtra state in the Youth Parliament, an advisory group to the state government, where participants recently discussed whether sex education should be introduced in Indian schools.

“I used to think that my whole world is within the four walls of my room, of the house,” says Aparna. “Now I see that there is a big, big world beyond that where many things are possible for me.”

While the story of Aparna’s childhood is heartbreaking, it is by no means a rarity in India. India’s Department of Women & Children estimated in 2009 that 3 million women are trafficked through India every year – 40 percent of whom are minors.

“Sex trafficking has been increasing in India year upon year, as the tourist influx increases,” says Ms. Talukdar. The increase “is also an indicator that the current methods of rehabilitation are not effective in the long term.”

Activists and academics engaged with the problem are of the opinion that the government needs to take a bigger role in sex worker rehabilitation. “The cases of sex trafficking are on the rise as more people in villages are forced into sex work,” said Ranjana Kumari, director at the Centre for Social Research in New Delhi. “The problem is that the scale of the problem is huge. State governments need to invest in rehabilitation; they cannot be dependent on a few NGO’s doing a very good job.”

While the Ministry of Human Resource Development has a program called “Swadhar’’ for “women in difficult circumstances,” which include those who have been trafficked, experts are skeptical about Swadhar’s effectiveness. There are no official statistics on the number of women Swadhar has helped.

Ms. Kumari said that because there is no clear data or research done on the magnitude of the problem, estimates on sex trafficking in India are just wild guesses. However, the government is now working on a reporting and surveillance system that will span from the district to the national level.

In the meantime, the hope that organizations like Kranti bring to these girls’ lives is promising. In her spare time Aparna enjoys watching movies, particularly action and horror movies, but she doesn’t have an appetite for love stories. She takes swimming classes, loves dancing and enjoys taking part in protests for social causes. And until recently, she was learning karate.

“What I really want is that girls become powerful and aren’t scared of anyone,” says Aparna. “They should think in their minds that ‘I will go ahead and progress and no one can hold me back.”

Published on June 6, 2012 in The New York Times India Ink. One of the most read pieces during India Ink’s first year.