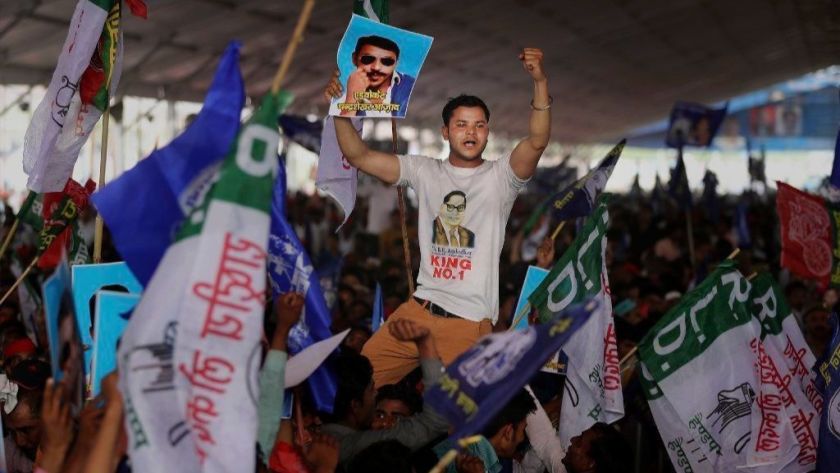 A demonstrator in Uttar Pradesh displays a picture of Dalit leader Chandrasekhar Azad at a rally in Deoband, India, in April. (Altaf Qadri / Associated Press)

In 2014, Mukesh Kumar, like much of India’s underclass, had pinned his hopes on Narendra Modi, who became prime minister after his party won elections in a landslide.

Today, Kumar regrets voting for him.

“In five years there should have been so much progress, but nothing has changed,” said Kumar, 26, a municipal sanitation worker who earns about $200 per month sweeping the streets of Varanasi, one of the holiest cities in Hinduism.

“Modi is only building roads,” he said. “What about those of us who are cleaning those roads? We are right where we were, dying in the heat of the sun, burning on the streets.”

Kumar belongs to the Dalit community, formerly known as the “untouchables,” the lowest level of India’s ancient caste hierarchy — and in the last election an important part of the historic victory by Modi’s Hindu nationalist Bharatiya Janata Party.

Though the party, known by its initials BJP, was traditionally seen as catering to upper-caste Hindus and the business elite, it won 40 of the 84 parliamentary seats reserved for Dalits, primarily on Modi’s promises of economic development for all.

Now as Modi seeks a second five-year term in multi-stage national elections whose results are expected Thursday, Dalits are once again expected to play a crucial role.

But here in Uttar Pradesh, India’s most populous state, many Dalit voters say Modi has failed to keep his economic pledges, while others point to growing caste-based violence and a perception that Modi’s government has diluted some legal protections for Dalits.

“In 2014 and through the early part of Modi’s tenure, the BJP was trying to use more inclusive language, saying that Modi cuts across all castes and communities,” said Neelanjan Sircar, a senior visiting fellow at the Center for Policy Research, a New Delhi think tank. “That has significantly shifted, and in the last couple of years there has been noticeable caste polarization.”

India’s constitution in 1950 outlawed caste-based discrimination and enshrined affirmative action for Dalits. But the country’s 200 million Dalits are still often denied access to basic rights such as public water sources and in some areas are still banned from marrying into higher castes or even sharing food with them.

Many are confined to the most menial jobs, such as cleaning sewers by hand, a practice euphemistically called manual scavenging.

In cities and villages, Dalits are often shunted into separate enclaves like the 1,000-person shantytown where Kumar lives, in the Ravindrapuri neighborhood of Varanasi, which runs alongside a newly paved road with recently installed LED street lamps.

The residents of the shanties say Varanasi’s progress has not made it to their doorsteps. They complain of a paucity of jobs, stagnant income, rising prices and a lack of water.

One day recently, just outside the labyrinth of tightly packed, one-room brick homes, five hogs feasted on rotting garbage that had spilled onto the side of the road. A statue of Babasaheb Ambedkar, the Dalit author of India’s constitution, stood a few hundred feet away just outside Ravindrapuri.

In 2014, Modi ran for Parliament from Varanasi, a nod to his Hindu values, and won by a large margin. Soon afterward, he established an office down the road in Ravindrapuri and embarked on ambitious plans to clean the city and the banks of the Ganges River, boost tourism and build new roads.

A partnership with the Japanese government was meant to transform Varanasi into a high-tech “smart city” in the image of Kyoto. Little of that has materialized.

Though Modi is still expected to win comfortably in Varanasi — which votes on Sunday, the last stage of the election — some analysts see his party losing ground in Uttar Pradesh. The state holds 80 of the 543 seats in India’s Parliament, 71 of which the party won in 2014.

Dalits account for roughly one-fifth of the voters in the state, and surveys by the independent Center for the Study of Developing Societies showed Dalit support for the BJP falling from 31% in January 2018 to 22% in May 2018, the most recent month for which figures were available.

The suicides of two Dalit university students in 2016 and 2017 made national headlines. In Modi’s home state of Gujarat, Hindu vigilantes battered four Dalits for skinning a dead cow, an animal sacred to Hindus.

In 2018, India’s Supreme Court introduced measures to restrict the use of a law aimed at reducing hate crimes against Dalits and indigenous tribes, a move that sparked nationwide protests. (Modi’s government eventually reversed the court order.)

Dalits also opposed a recent move to extend affirmative action quotas for government jobs and higher education to poor upper-caste Hindus, a change that educated Dalits said could eventually unravel their own protections.

“There has been vikas” — progress — “only on the surface,” said Rita, a 24-year-old Dalit who goes by one name and is a doctoral student at the Banaras Hindu University in Varanasi. She helped lead student protests against the affirmative action ruling.

“My community’s condition is only deteriorating, becoming more insecure,” she said.

She said she would cast her vote for an alliance of two regional parties — the Bahujan Samaj Party, which has historically represented Dalit voters; and its erstwhile rival the Samajwadi Party, which has relied on support from other low castes and Muslims, another community that has complained of marginalization under Modi.

The two parties won a significant chunk of the Dalit vote in Uttar Pradesh in 2014, and their so-called grand alliance this time poses a serious threat to Modi’s dominance in the state.

“There has been a political reawakening in the Dalit community in opposition to the BJP, and the BJP has not been able to understand it fully,” said Hemant Kumar Malviya, an associate professor of political science at Banaras Hindu University.

The BJP has attempted to woo Dalit voters by appointing Ram Nath Kovind, a Dalit, to the mostly ceremonial post of president in 2017. In March, Modi washed the feet of five Dalit sanitation workers, a move that he described as an expression of his values — and which has reportedly been featured on BJP election pamphlets distributed in Dalit-dominated areas in Uttar Pradesh.

Kumar said that when Modi visits Varanasi, police restrict Dalits’ movements for security reasons and “remove Dalits from the streets.”

“Of course, now, in election season, he will wash our feet,” Kumar said, shaking his head angrily. “He will do whatever he can to win our votes.”

Published on the front page in print and online, The Los Angeles Times, May 17, 2019.