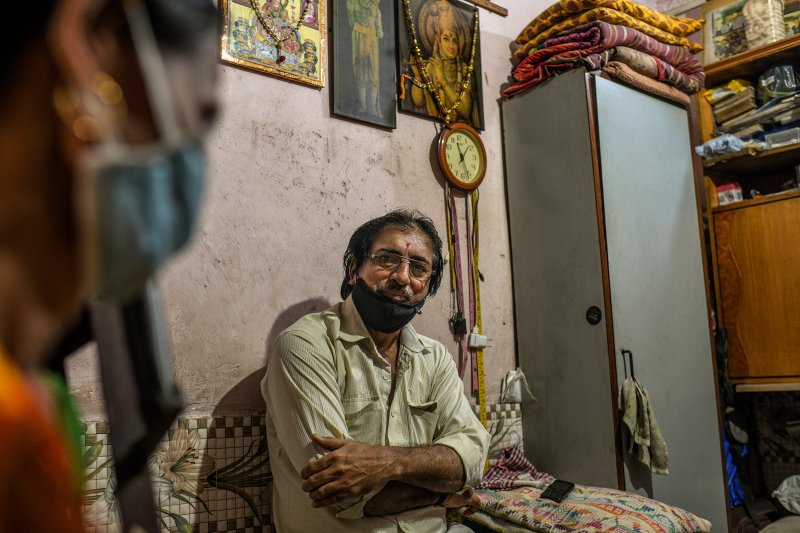 Jayanti Keshav Parmar, a tailor, at his home in Dharavi. His sewing machine sits idle, as no one in the neighborhood can afford to have new clothes stitched this year. (Atul Loke for TIME)

Jayanti Keshav Parmar, a tailor who lives in Dharavi, a bustling informal settlement of nearly 1 million low-income residents packed into a one-square-mile area in Mumbai, has been stuck at home since March 25 when the Indian government declared a stringent lockdown to contain the spread of COVID-19.

Before the lockdown, he worked at a store doing alterations and would make about $200 a month, but now he has exhausted his savings. Out of work for over five months, he has not been able to pay the $80 monthly rent on his compact home in Dharavi since March. His sewing machine at home sits idle, as no one in the neighborhood can afford to have new clothes stitched this year. His wife, who had secured some work as a domestic helper in an apartment in Mumbai late last year, was asked to stop coming to the building because of fear of spreading the coronavirus. They are down to cooking one meal a day, the remains of which they eat for lunch the following day. He worries about what will happen if his wife or son fall sick. “If there’s no money for food, how will we pay a big hospital bill?” Parmar says.

Dharavi, often called Asia’s largest slum, is a hyper-dense network of brick homes and small-scale enterprises that sprawl in the shadow of shiny new skyscrapers in the heart of India’s financial capital. Until recently, it was home to a thriving economy, with 20,000-odd factories and small businesses that recycle plastic, make earthen pottery, tan leather, stitch garments, make soap and cook meals. While coronavirus cases in India are soaring—the country is on track to overtake the United States as the nation with the most cases—community engagement and a nimble local government have meant that for now, the virus seems to be contained in Dharavi. But a tough national lockdown declared by Prime Minister Narendra Modi with little warning or preparation has crippled the local economy and residents are struggling to survive.

Dharavi’s slowdown is emblematic of a wider national decline. The Indian economy contracted by 23.9% in the second quarter, the sharpest fall of any major economy during the pandemic. About 21 million salaried employees lost their jobs from April to August, according to the Centre for Monitoring Indian Economy. Those in the informal economy, which constitutes 90% of India’s workforce and is the bedrock upon which the country’s $2.9 trillion economy is built, have suffered the most. Most people in the unorganized sector do not have any savings and live off what they earn each week, making it impossible for them to cope with months of a protracted shutdown. The loss of income and the diminished purchasing power has depressed demand, and because many small businesses in informal settlements like Dharavi sell to others in the area, the blow to the economy is even harsher.

“The Indian government never took the impact of COVID-19 and the lockdown on the unorganized sector into account,” says Arun Kumar, a professor at the Institute of Social Sciences in New Delhi. It could take up to three years for the Indian economy to recover after the pandemic, he says. 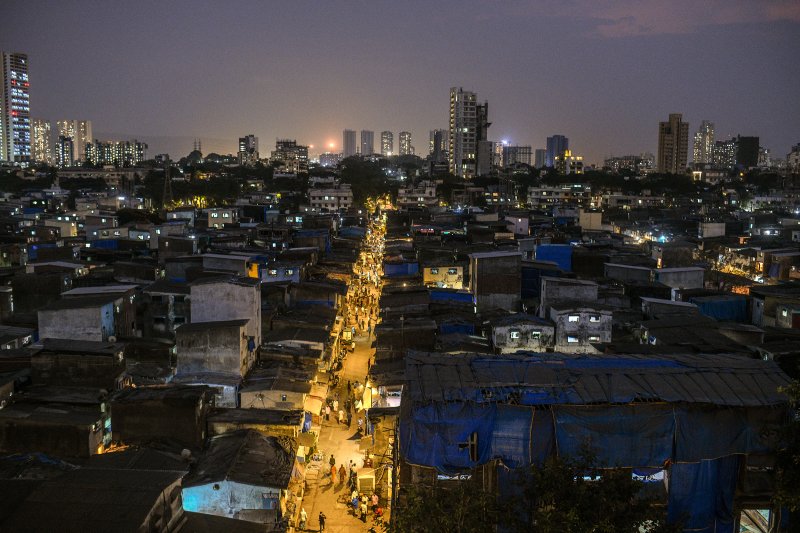 Dharavi in late April. The hyper-dense network of brick homes and small scale enterprises, which sprawl in the shadow of shiny new skyscrapers, was home to a thriving economy—until recently. (Atul Loke—The New York Times/Redux)

For three months after Modi declared a nationwide shutdown, hundreds of small businesses in this city-within-a-city pulled their shutters down. Some of the narrow lanes were barricaded with planks of wood, broken furniture, and wooden vegetable carts, with signs warning outsiders to stay away. People wearing makeshift masks made from old saris and handkerchiefs occasionally converged in informal markets, where wary residents attempted to keep a distance from each other. Though the Indian economy gradually began to reopen in June, many of Dharavi’s small businesses are still struggling to reboot.

Irfan Bhai, who runs a plastic-recycling business in Dharavi, fears a long-term hit to his business. Before the lockdown, his workshop processed about 15 metric tons of plastic scrap each month, from which he made things like plastic buckets, mugs, and plates. His business, like many others, is entwined with the economic fabric of the neighborhood. The machine that crushes the plastic scrap he buys is next door; many of his clients have offices in the area. He had to shut down his factory in March and has lived on savings since.

“Usually this area is constantly active,” Bhai says. “But during the lockdown, 80% of businesses have been closed. Everything has gone silent.”

Now that the lockdown is over, he says he does not have the money to buy the plastic scrap needed to restart the business, and because of the stigma attached to his Dharavi address, he says he has found it hard to secure a bank loan or access government benefits for small businesses. The walls of his workshop are lined with about 2,000 plastic mugs in vibrant colors, but the packages are all collecting dust.

The last time his business suffered such a blow was in 2016, when the Indian government made a sweeping move to invalidate most of the paper currency in circulation, in a widely criticized bid to curb corruption. “India went back 10 years then,” he says. “Now with this lockdown, India has gone back another 10 years.”

Though Dharavi has emerged as an unlikely story of success lauded for containing the spread of coronavirus, the neighborhood’s battles are far from over. Dharavi was one of the most vulnerable to the spread of the coronavirus in the country because of its high density. While wealthy Indians have been able to shelter in their apartments, Dharavi’s residents live in tightly packed shanties, share public toilets, and rely on community kitchens.

From the beginning, Kiran Dighavkar, the city official leading the response to the virus in Dharavi, knew that standard models of social distancing, contact tracing, and home quarantine would be ineffective here. Instead, his team focused on creating customized solutions that responded to the community’s lived reality. They enlisted local doctors who ran private practices in the area and provided them with the personal protective equipment they needed to re-open their clinics and go door-to-door to screen for people with high temperatures or low oxygen levels. They created health-care facilities and quarantine centers by taking over a sports club, a marriage hall and private hospitals. They set up community kitchens with customized meals so that those fasting during the month of Ramadan could be accommodated. A 200-bed hospital equipped with supplemental oxygen for coronavirus patients was built in just two weeks in a parking lot. The 450 community toilets in the area were sanitized three times a day, and the local government provided free virus tests.

Their efforts paid off. In May, there were an average of 43 new cases each day in the neighborhood. By the third week of August, daily cases were down to six. The local government’s efforts in the area have been commended by the World Health Organization, and officials have been fielding calls from authorities in the Philippines and Kenya for guidance on how to replicate the model in other dense neighborhoods.

“The beauty of the Dharavi model was that it was based on first-hand experiences. Instead of being reactive, we chased the virus,” says Dighavkar, adding that the credit for their success went to community engagement. 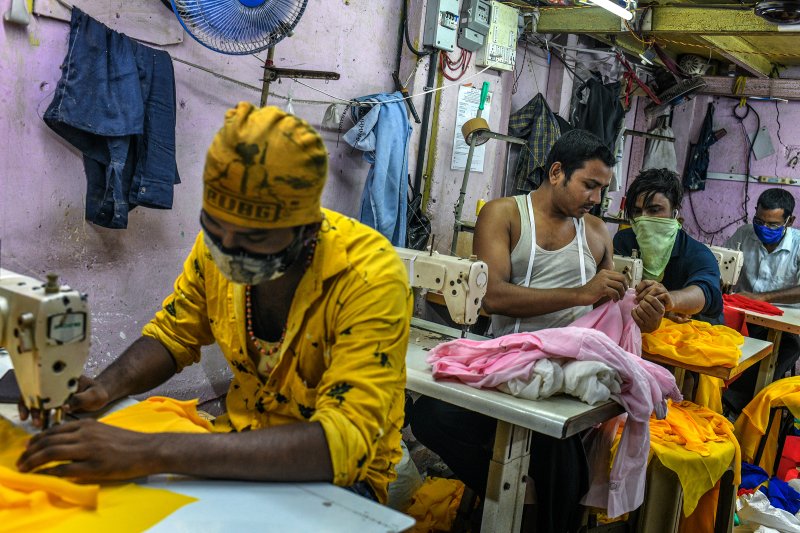 “My family was worried about the disease and didn’t want me to return to the city, but I had to come back to work,” said Ishrar Ali, who stitches women’s tops in a garment workshop in Dharavi. (Atul Loke for TIME)

But economic hardship has forced people back to work in Dharavi, as in the rest of India. While the Indian government, in a bid to restart the economy, has begun to lift lockdown restrictions, the country now has the largest number of daily confirmed cases in the world and over 5.6 million cases in total. The nearly 150,000 migrant workers who left Dharavi for their villages during the lockdown have begun to return to work, and local officials fear a new wave could infect the community. In the past two weeks, Dighavkar has noticed an uptick in cases in Dharavi with 15 new cases on Thursday. “There is a possibility that the infections might be coming back,” says Dighavkar. “In a pandemic like COVID, nobody can guess what will happen next.”

Ishrar Ali, who stitches women’s tops in a garment workshop in Dharavi and shares the room above the workshop with eight other migrants, has recently returned to the city. Ali, 29, who earned about $70 a month, found it hard to sustain himself in the city when the garment workshop shut down in March. He found himself standing in long lines waiting for food handouts from nonprofits or local officials. In April, he took a bus back to his village in Uttar Pradesh, a state in north India, to be with his parents, wife, and child. But there was little work in the village and Ali was forced to return in August.

“My family was worried about the disease and didn’t want me to return to the city, but I had to come back to work,” said Ali. “You have to take some risk to fill your stomach.”

Previous post
How the Pandemic Is Reshaping India
Next post
As COVID-19 spreads, India tries to control the narrative by targeting journalists