India Is Trapping Its Young People 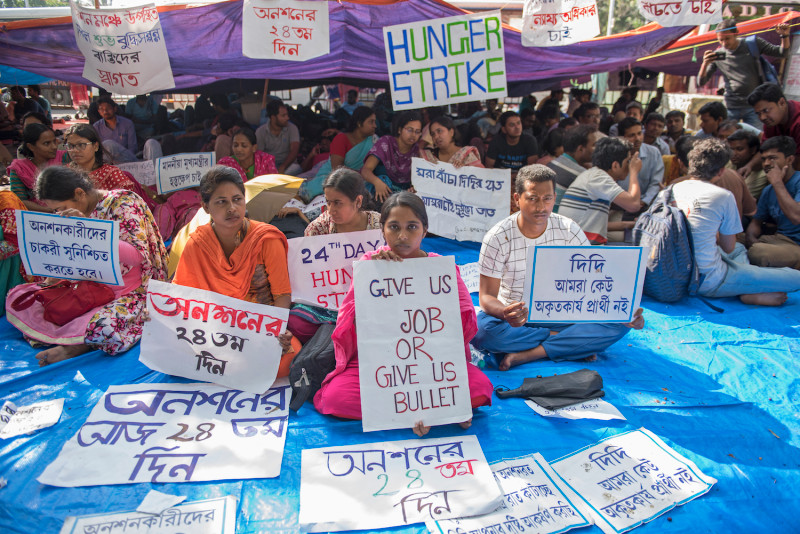 There aren’t enough jobs to go around, but as the ongoing election has made clear, neither party is ready to tackle the problem.

In 2016, Soniya Gupta graduated with a bachelor’s degree in mathematics from a midtier college in Datia, a small town in the central Indian state of Madhya Pradesh. Many months later, she was still spending most of her days trying to find a government job, the key to securing a stable income in Datia. Gupta cast her net wide—she applied to be a police officer, railway technician, army officer, airport authorities executive, tax collector, and a forest ranger.

Her search going nowhere, in January, Gupta moved 45 miles away from her hometown to Gwalior, a larger city. Now she spends her days and most of her money in crowded coaching classes meant to help her prepare for the entrance examinations needed to qualify for government employment. Gupta’s neighborhood is a labyrinth of run-down buildings emblazoned with the names of all manner of coaching institutions peddling expertise in math, science, spoken English, and “personality development.” Like many others, Gupta is caught in India’s $45 billion private coaching industry; each month, her family sends her about $200 to pay her rent, food, school fees, books, practice tests, travel to examination centers, and application fees—but the expenses are unsustainable.

In India, where job creation has not kept pace with economic growth, finding gainful employment is becoming an increasingly herculean task for educated young people. Of the country’s 1.3 billion people, half the population is under the age of 27, and 1.3 million young people reach working age every month. The World Bank predicts that the Indian economy will keep growing—at a remarkable 7.3 percent—this coming year. But so will joblessness unless the Indian economy generates 8 millionnew jobs annually, a huge feat.

In January, a leaked official report showed that India’s unemployment rate had already hit a 45-year high of 6.1 percent in the last year. The report was withheld from public release, which led two top statistics commissioners to resign in protest. Try as it might, however, there is no way for New Delhi to hide the jobs crisis. According to a survey by the Centre for Monitoring Indian Economy, a research firm that conducts a national employment survey, 11 million jobs were lost last year—a fact that many people feel in their daily lives.

Studies show that unemployment is most prevalent among young and highly educated people. Urban men between the ages of 20 and 24 account for 13.5 percent of the working-age population but 60 percent of the unemployed. With competition increasing for the limited government jobs that ensure a secure future and better pay than most private jobs, each time new positions are announced, thousands of young graduates clamor to apply. For example, when the Mumbai city police posted 1,137 constable job openings—the job requires a high school diploma and pays $357 a month—more than 200,000 people applied, including candidates who had been trained as doctors, lawyers, and engineers.

According to Amit Basole, an associate professor of economics at Azim Premji University, some Indians with more education are willing to stay unemployed longer as they look for jobs that are better suited to their training, which pushes up jobless figures. Meanwhile, India’s education system leaves many other young graduates unemployable, with no skills that prepare them for the competitive market they face after school. According to a study by Aspiring Minds, an Indian talent assessment firm, more than 80 percent of Indian engineers are unemployable in the knowledge economy. A study by the Associated Chambers of Commerce and Industry of India found that only 7 percent of India’s business school graduates were employable.

A study by the Associated Chambers of Commerce and Industry of India found that only 7 percent of India’s business school graduates were employable.

And a 2016 report by the Asian Development Bank found that only 10-20 percent of employers in Madhya Pradesh perceived graduates from technical and vocational education and training institutes to be employable.

The growing ranks of educated, unemployed, and disgruntled young people are a major issue in India’s ongoing national election, where 900 million voters are eligible to decide whether they want another five years of Prime Minister Narendra Modi’s Bharatiya Janata Party (BJP) at the helm or would prefer the Indian National Congress, which led the government for decades after independence. In opinion polls, Modi still has a considerable lead over Rahul Gandhi, the leader of the Congress party. But unemployment is increasingly a problem for both. “Not a single political party is thinking about the younger generation seriously,” Gupta said.

Modi, for his part, has been criticized for failing to fulfill his earlier promises of creating 10 million jobs each year by boosting manufacturing and entrepreneurship. In fact, he may have made India’s woes worse: Critics such as Mahesh Vyas, the managing director and CEO of the Centre for Monitoring Indian Economy, and P. Chidambaram, a former finance minister and senior Congress party leader, argue that the employment crunch was exacerbated by Modi’s surprise decision to discontinue the majority of currency in circulation in an effort to crack down on corruption and by his introduction of a sweeping new sales tax, both of which hurt small businesses. Young people, many of whom supported Modi, have borne the brunt of both decisions. Economic difficulties were partially responsible for the BJP losing elections in three critical states late last year.

Gandhi and the Congress party, meanwhile, have hammered home the employment problem at campaign events. The Congress manifesto, which called unemployment India’s “gravest challenge,” promised to create a new ministry of industry, services, and employment and fill 2 million government job vacancies by March 2020. Gandhi also promised to instate a minimum income guarantee with cash handouts of $1,022 annually to the poorest 20 percent of the population, or about 50 million families. “The moment the poor will have money, they will start purchasing, factories will start operating again and the youth will get employment again,” Gandhi said at a recent campaign event.

It is unclear, though, whether voters trust him. According a recent CVoter poll, 28 percent of all Indians said unemployment was the most important problem facing the country today. Yet 37 percent said they believed that a BJP-led government was the best suited to tackle the issue. Only 20 percent said the same of Congress. The last Congress party-led government—which ruled from 2004 to 2014—was beleaguered with corruption scandals, economic malaise, and a widespread sense of policy paralysis. Many Indian voters thus doubt its ability to deliver an economic turnaround.