In India, A Surge in Female Voters 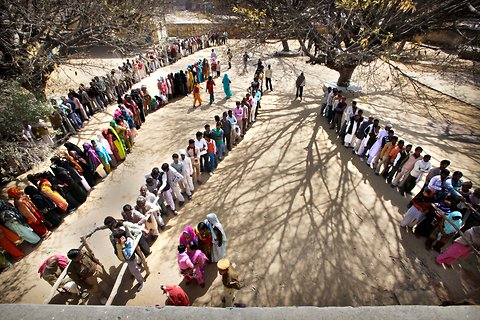 Voters stand in a queue to cast their votes at a polling station near Moradabad, Uttar Pradesh, March 3, 2012. Manish Swarup/Associated Press

The results for the assembly elections held across five Indian states, announced yesterday, threw up some surprises. But a welcome surprise in these elections was the high voter turn out. Voters, and particularly women voters, went to the polls in unexpectedly high numbers.

Voter turnout jumped nearly 50 percent in one state, Uttar Pradesh, and women voted at higher rates than men in all five states that had elections. Activists credit an increased political awareness, growing discontent with the government and an easier, more organized voting process for the increases.

According to data released by the election committee, the voter turnout in Uttar Pradesh increased from 46 percent in 2007 to 59.48 percent of registered voters this week. In Goa, turnout was at 81.74 percent, up by 11.23 percentage points from 2007. Voter turnout also increased in Punjab and Uttarakhand. Manipur was the only state where voting turnout dropped, at 79.8 percent this week.

“I’m very impressed with the voting turnout in this year’s election – particularly Goa’s 82 percent,” said Shyama Kulkarni, a trustee for Action for Good Governance and Networking, a group that works to mobilize voters. “Whenever there is an anti-incumbency factor and people are fed up with the sitting government and they want change, more people come out to vote. In Uttar Pradesh people are fed up with Mayawati and that is what is being reflected in the voting percentages.”

The anti-corruption movement led by activist Anna Hazare last year also served to raise public awareness about the need for political participation according to analysts. “With the recent Anna Hazare movement, people in India understand that they have to participate in their own governance structures,” said Manjeet Kripalani, executive director of the Gateway House: Indian Council On Global Relations. “If you vote in higher numbers then politicians take you more seriously.”

“I was in Uttar Pradesh in late February and a lot of people I met said that candidates from their constituency turned up five years ago and asked for votes, got elected and haven’t visited the constituency since, and so this time we will kick them out,” Ms. Kripalani said. “People are hounding out candidates who don’t show up and work for them – and that is a big step forward for India. People are not necessarily voting for the Samajwadi Party, they are voting against Mayawati.”

Women also played a role in the elections. In Uttar Pradesh, eligible female voters turned out at a greater rate 60.29 percent to 58.82 percent. The figures were notable in a state where for every 1,000 men there are just 816 women, according to government statistics. Likewise, in Goa women also voted at a greater rate than men, 85.97 percent to 79.67 percent.

Activists attributed the increase to the systematic distribution of voter slips across all five states. Improved security around polling stations also bolstered the female vote, officials said. The chief election commissioner S.Y, Quraishi, said various “confidence-building measures” had been taken to ensure the security of voters, along improved education of voters prior to the election.

Urban voters, traditionally considered apathetic, also turned out in large numbers. In Lucknow, the turnout of voters increased from 29.32 percent in 2007 to 53.16 percent this year. In Allahabad, voter turnout this year was 46.6 percent, compared to 30.86 percent in 2007. Amritsar in Punjab saw an increase of 22.56 percent while Dehradun in Uttarakhand saw a 21.46 percent increase.

“I think we are moving ahead and becoming more mature as a democracy,” said Ms. Kripalani. “People in urban India have access to private services and are able to get out of the net of the government. People in rural areas and the poor on the other hand have a much higher dependency on government services and interface with the government. But now even urban India, which has been woefully neglected, is realizing that politicians ignore people who don’t vote for them. So they too will start showing up to vote in larger numbers.”