India student leader ‘a symbol of protest’ against PM Modi 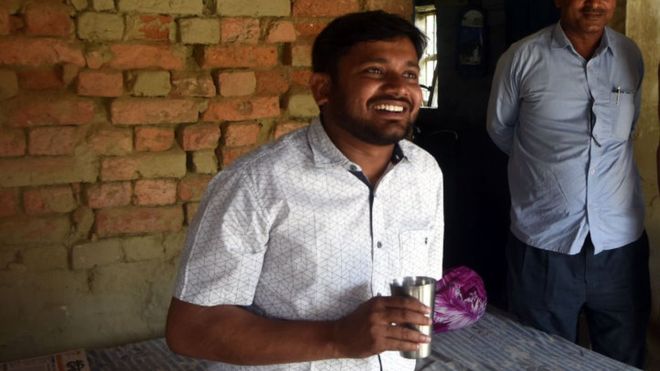 Mr Kumar is a candidate for the Communist Party of India. (Getty Images)

A district in one of India’s poorest states has made national headlines in the ongoing general election after a firebrand student leader decided to run for a seat there. Kanhaiya Kumar, who was charged with “sedition” for allegedly shouting anti-India slogans and spent a few weeks in jail in 2016, is a candidate from Begusarai constituency where voting was held on Monday. Neha Thirani Bagri reports.

It is early morning in the Bihari village of Bihat, when Kanhaiya Kumar emerges from his home.

He is immediately swamped by young men rushing to shake his hand, asking to take selfies with him, wearing t-shirts emblazoned with his image.

Mr Kumar, who grew up here, shot to fame in 2016 when he was arrested and charged with sedition.

Then a student union leader at Delhi’s Jawaharlal Nehru University, he was accused of chanting anti-India slogans at a campus event to commemorate the anniversary of the hanging of Mohammed Afzal Guru, a Kashmiri man convicted of plotting the 2001 attacks on the Indian parliament.

His arrest became the rallying cry for critics of the Hindu nationalist politics of India’s ruling Bharatiya Janata Party (BJP), with student protests organised across the country.

Mr Kumar is still fighting the charge of sedition, a colonial-era statute that has been used to clamp down on dissent in India, which he calls “completely false propaganda.”

“Kanhaiya Kumar has become a symbol of protest against the politics which is represented by Prime Minister Narendra Modi,” said Sanjay Kumar, director of the Centre for the Study of Developing Societies.

Mr Kumar has since completed his PhD. On Monday, he had his first foray into politics, when he ran for election in the constituency of Begusarai in the fourth phase of polling in the Indian election. Votes will only be counted in late May.

The constituency was once a communist stronghold known as the “Leningrad of Bihar.”

“This was not a choice, to enter politics. It was a forced responsibility,” Mr Kumar said during a full day of campaigning before his constituency went to the polls.

Mr Kumar is from the Communist Party of India (CPI), the influence of which has been waning over the past few years.

“Our constitution talks about a secular country. If they are attempting to invoke a particular religion and change the character of the state, then, of course, we will oppose this.”

While Mr Modi swept to a historic victory in India’s last election in 2014 on the promise of better days ahead, many rural Indians have been disappointed with rising unemployment and an agrarian crisis.

Mr Modi and other BJP leaders have been criticised for spouting communally-charged rhetoric and remaining silent in the face of increasing religious violence.

The main opposition Congress party has struggled to mount a strong challenge, though gained some momentum with victories in key state elections last year.

Bihar, India’s third most populous state, elects 40 members out of 545 to India’s lower house of parliament. In the 2014 general election, the BJP won 22 of the 40 seats.

On Monday, Mr Kumar went up against BJP’s Giriraj Singh, who once said that those who oppose Mr Modi should go to Pakistan. It was a three-way contest with the regional Rashtriya Janata Dal (RJD), which has fielded a Muslim candidate.

He has become known for often emphasising education, jobs, public healthcare, and minority rights in his speeches.

Mr Kumar has garnered the support of civil rights campaigners, activists, and celebrities from across India.

His outsized social media presence has also made him particularly popular with young people, many of whom are drawn towards Mr Kumar’s charismatic personality, fiery oratory, and local roots.

‘Connect with the young’

Videos of his speeches, often critical of the BJP and right-wing politics, have garnered millions of views on YouTube and Facebook.

“Kanhaiya’s thinking connects with us young people,” said Pankaj Kumar, 24, adding that he often shares the politician’s speeches with his friends on WhatsApp.

“If Kanhaiya wins at least we will have pride – it was because of him that Begusarai became famous in India and even the whole world.”

Mr Kumar’s speeches have also attracted a sizeable number of Muslim voters – many in the district were vocal supporters of him.

“People with power in this country are only thinking about how to create religious division,” said Mohammed Shoaib Alam.

“Kanhaiya will raise his voice for the issues of poor people,” he added.

While Mr Kumar’s popularity has drawn national attention to the contest for the parliamentary seat from this remote constituency, his victory is far from certain.

“All odds are against him,” said Neelanjan Sircar, a senior fellow at the Centre for Policy Research, adding that Mr Kumar did not benefit from having the backing of a large political party or coalition or the consolidated vote from one community.

“If he pulls this off – and he is massively popular on the ground – it would just be a testament to his individual political skill.”