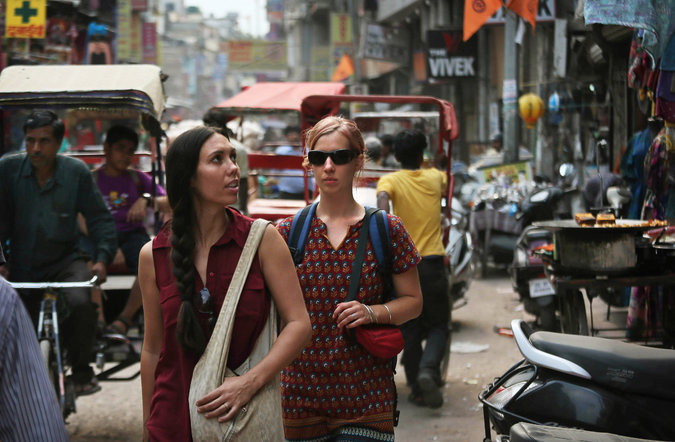 MUMBAI, India —Dheeraj Dixit used to make $2 a day snapping photographs of the tourists milling around the Gateway of India, the imposing monument at the southern tip of Mumbai. But a recent series of well-publicized attacks on women in India, and the international outcry over them have Mr. Dixit worried.

“India’s image is spoiled when incidents like this happen,” Mr. Dixit, 38, said ruefully while hustling for customers on a recent evening. “It’s unfortunate, and it isn’t good for business.”

Visits to India by female tourists dropped 35 percent in the first three months of this year compared with the same period last year, according to the Associated Chambers of Commerce and Industry of India. That three-month period came after the fatal gang-rape of a 23-year-old student in New Delhi in December, which brought protesters to the streets and shined a spotlight on the harassment and intimidation women face every day in India.

Although the per capita rate of rapes reported to the police in India is below that of many developed nations, some experts believe that many sexual attacks go unreported and that the actual number is far higher. The public outrage over the December attack led to the passage of a new sexual offense law in March that imposes stronger penalties for violence against women and criminalizes actions like stalking and voyeurism.

But attacks on women have continued with an alarming regularity. While Indian women are most often the targets, foreign tourists have been victims as well. A 30-year-old American woman reported being gang-raped in a northern resort town last week. She picked three men out of a lineup, and on Friday, the accused were presented before a magistrate and sent to judicial custody for 14 days.

On March 15, a group of men raped a 39-year-old Swiss tourist in Madhya Pradesh and attacked her husband. Four days later, a 25-year-old British tourist jumped off the balcony of her hotel room in Agra, fearing that the hotel owner was planning to sexually assault her.

“With the most recent gang rape in Delhi on the forefront of my mind, I travel to India with more anxiety than I’m used to when traveling to a foreign country,” said Corinne Aparis, 24, of San Francisco, who is currently in the western Indian city of Udaipur as an international program coordinator with the Foundation for Sustainable Development. “It scares me to think that there’s that type of deep hatred toward women — that just being a woman is enough of a target and reason for some men to inflict such violence on me.”

India can ill afford to lose the foreign currency that tourists inject into the economy. Economic growth has slipped to 5 percent in 2012 from more than 9 percent annually in 2010, and the government needs foreign currency to offset huge payments for imported oil and coal, which cannot be paid in rupees.

A total of 6.4 million foreign tourists traveled to India last year, a smaller number than in some much smaller countries, like France, or even in cities like New York. But such visitors make an essential contribution to the country’s flagging economy and are vital to the survival of millions of one-man operators like Mr. Dixit.

Tourism over all accounts for 6 percent of India’s gross domestic product and is responsible for about 10 percent of organized employment in the country, or some 20 million jobs. An estimated 60 million to 70 million more people, like Mr. Dixit, make their living off foreigners in an “unorganized” way. Foreign tourism specifically contributes about $18 billion, or approximately 20 percent of India’s current account deficit, according to official figures.

Mr. Dixit is not alone in his worries about India’s image among women. The Indian government and the tourism industry are scrambling to reassure would-be visitors. Indian states are forming tourism police forces, hotels have created exclusive areas for women only, and tour groups are adding features like women’s only tours and cellphones for all customers.

For some foreign tourists, the increased fears mean extra precautions.

“When I said I was traveling to India, my friends and family asked me to be careful and were more worried about me than if I was traveling to any other foreign country,” said Nadine Herweijer, 26, while sitting in the shade of a tree at the Gateway of India.

Ms. Herweijer, from Voorburg in the Netherlands, said that she was “traveling in a group and would not feel comfortable traveling alone in India because of safety reasons.”

In April, the Tourism Ministry asked all state governments to create police forces just for tourist spots. Such forces are already present in the states of Goa, Rajasthan, and Jammu and Kashmir, where they wear special armbands to identify themselves.

The Tourism Ministry is also setting up a multilingual toll-free help line that will be answered by women and act as a concierge service, but will also provide telephone numbers for all the police stations in India, officials said.

Thomas Cook India has started exclusive tours for women and offers additional services, like free cellphones along with emergency contact numbers for police stations, hospitals, and help-line numbers. The Imperial, a luxury hotel in New Delhi, has created a “single lady corridor” of 12 rooms, each with a security camera on the door, staffed by an all-female staff. Even the airport pickup contact is a woman.

Along with improving security, though, tourism industry officials say that India also needs to carefully rebuild its image.

“We need to tell the world that Indian cities are as safe or unsafe as any other metropolitan cities,” said Arun Varma, the chief executive at Prime Travels, a tour operator.
Published in print and online, The New York Times; June 10, 2013.