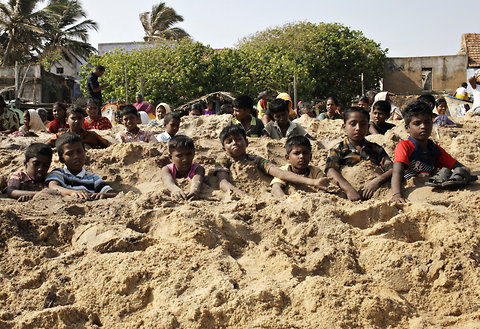 Protesters buried themselves in sand on a beach near Idinthakarai village in Tamil Nadu as part of a demonstration against building of the Kudankulam nuclear plant, Sept. 26, 2012.| Strdel/Agence France-Presse — Getty Images

Gone are the days when picketing, candlelight vigils, marches or hunger strikes were enough to guarantee your cause a spot on prime-time television in India. No matter how grave or frivolous the cause, modern protesters employ far more creative tactics to draw attention.

On Wednesday, 1,500 villagers, including several children, in the southern state of Tamil Nadu buried themselves in the sand to their waists for six hours in the latest demonstration against the building of the Kudankulam nuclear plant. The protesters, who are from fishing families from the surrounding districts, are worried that once the plant is active it will contaminate the fish, ruining their livelihoods.

Extreme protests have been the mainstay of activists around the world for years, but in India, which popularized and perfected the nonviolent protest and the quietly powerful hunger strike, there has been a recent rush to embrace increasingly unusual forms of agitation. Some attribute their rise to the prevalence of new television channels and social media in India, other to deeper causes.

In South Asia today, “ordinary people are under serious stress,” said Ranjan Chakrabarti, vice chancellor of West Bengal’s Vidyasagar University and a professor who specializes in the history of crime and protest in India. “They are under pressure and they have decided to register their protest in these novel forms,” he said.

Similar protests happened “during the first phase of industrialization in Europe and during the initial decades of British colonization in India,” he said.

In the case of the Tamil Nadu fishermen, they earlier tried more conventional tactics to gain the government’s attention: picketing the central government offices in Kudankulam, occupying village cemeteries to symbolically solicit the guidance of their ancestors and using their fishing boats to block entry to the nearby harbor.

On Thursday, the Supreme Court warned  that it will suspend work at the Kudankulam nuclear power plant if safety concerns were not addressed. The court said this while hearing an appeal challenging the judgment of the Madras High Court to allow fuel loading in the plant.

On Sept. 10, the police used violence against the protestors at a rally at the plant, beating them with sticks, firing tear gas and arresting the protestors.  On Thursday, a fact-finding team berated the police for its abusive behavior.

The anti-nuclear activists have continued their protests, according to news reports.

The more recent attention-getting protests aren’t always so physically demanding. On Sunday, a group of incensed teachers waved their slippers at the Bihar chief minister Nitish Kumar at a rally in the state, in a symbolic gesture of disdain. The teachers, who were on contract, demanded that their salaries be equal to those of regular teachers. However, the chief minister accused the opposition party of instigating the protests. 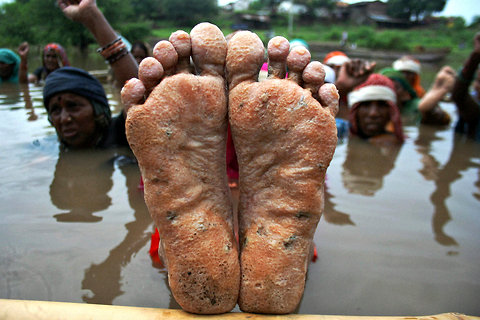 In Ghogalgaon village in the central Indian state of Madhya Pradesh, 51 villagers stood neck deep in water for 17 days, demanding that the government lower the water level in the nearby Omkareshwar dam on the Narmada River. The “jal satyagraha” or “peaceful water protest,” began on Aug. 25 when the water level in the dam was raised by two meters (6.5 feet). The villagers say that raising the level of the dam will further submerge their lands.

The images of the villagers standing in the water, their bodies shriveled and their skin peeling, was widely circulated on social networking sites. On Sept. 10, the chief minister of the state, Shivraj Singh Chouhan, gave into their demands and agreed to lower the water level and compensate the farmers for their land.

A similar protest in the water was carried out by 245 villagers near the Indira Sagar dam, in Madhya Pradesh, but without the positive outcome — police arrested the protesters. Villagers protesting against the Kudankulam power plant tried the same tactic, with hundreds of people forming a human chain in the water on Sept. 13, but they, too, were disbanded by police. 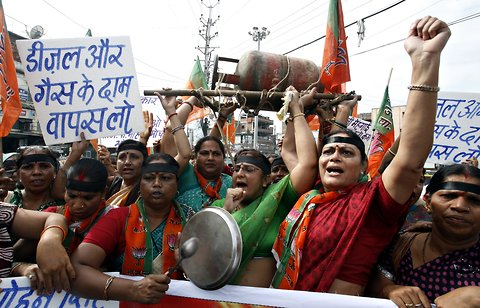 Unusual “funeral” marches have become another common theme for protests in India. As the government’s announcement of a rise in the price of diesel and a cap on subsidized gas cylinders earlier this month unleashed protests throughout the nation, members of the opposition Bharatiya Janata Party held a mock funeral procession of gas cylinders in Bhopal.

And earlier this month in Allahabad, activists opposed to an increase in a house tax staged a parody of a funeral procession of the members of the municipal corporation administration.

Meanwhile, in a forest in Maharashtra, the Greenpeace activist Brikesh Singh is living in a tree for a month to protest coal mining’s devastation of biodiversity and the displacement of forest communities. The protest, which includes gathering petitions from citizens to submit to the prime minister, attracted the attention of a Parliament member, Hansraj Ahir, who visited the activist.

“I wanted people in the city to wake up in the morning and when they are watching the news of television with a cup of a coffee, wonder why has this guy climbed a tree — and that would prompt them to find out about the issue,” said Mr. Singh, 32, who heads public engagement campaigns at Greenpeace India. “To draw people’s attention, someone ordinary needs to go out and do something extraordinary.”

Published on September 28, 2012 in The New York Times India Ink.