India is about to hold the biggest election in history. Here are the numbers 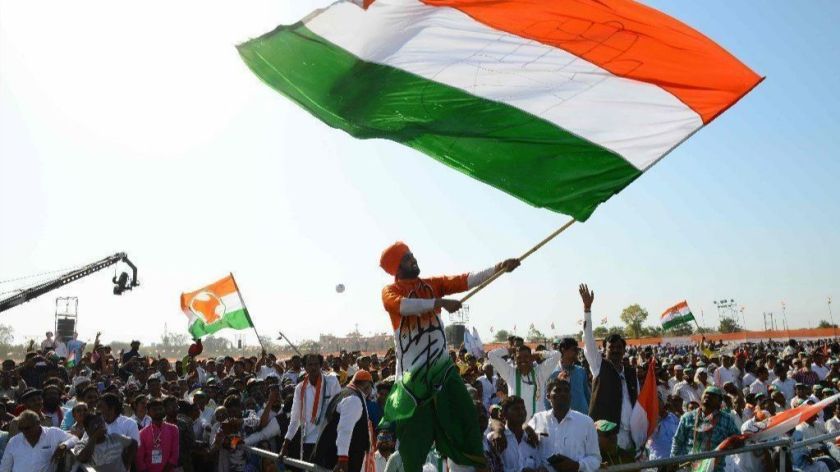 Supporters of India’s opposition Congress party cheer at an election rally outside the city of Ahmedabad on March 12.(Sam Panthaky / AFP/Getty Images)

India’s general elections, the biggest democratic exercise in the world, get underway in April and will decide the leadership and direction of the country of 1.3 billion people for the next five years.

Prime Minister Narendra Modi and his nationalist Bharatiya Janata Party came to power with a historic landslide victory in the last national polls, in 2014.

But his promises of “achhe din,” or better days ahead, have given way to disappointment over sluggish economic growth, discontent among farmers and rising unemployment, making the race more of a contest than many expected.

The logistics of ensuring free and fair elections for the largest voter base in the world are complex and overwhelming. Here’s a look at India’s elections, by the numbers:

More than 900 million Indians — nearly three times the entire U.S. population — will be eligible to cast ballots. That includes 45 million people who turned 18 and became eligible to vote since 2014.

Voters cast their ballots for representatives in the Lok Sabha, the lower and more powerful house of India’s two-tiered Parliament. The Lok Sabha has 543 elected seats, and the party or coalition that holds a 272-seat majority selects the prime minister.

The Indian electorate takes participatory democracy seriously. The 2014 election saw a record-high turnout of more than 550 million voters, or nearly two-thirds of eligible voters — 66.4%. That’s a greater share than the 61% who cast ballots in the 2016 U.S. general election.

Research shows that Modi’s BJP was the biggest beneficiary of the high turnout in 2014 as young and first-time voters flocked to his economic message. The party faces the challenge of recapturing that energy.

Parties and candidates spent $5 billion in 2014, according to the New Delhi-based Center for Media Studies, and some experts have predicted that figure could nearly double in 2019.

In comparison, the combined cost of the 2016 U.S. presidential and congressional elections was estimated at about $6.5 billion, according to OpenSecrets.org.

While parliamentary candidates in India are meant to cap campaign spending at about $1 million and disclose details of their spending to India’s Election Commission, political financing in India is notoriously opaque and most campaign donations go undeclared.

1.25: Maximum distance, in miles, that a voter must travel to a polling station

India’s laws mandate that no voter should have to travel more than 1.25 miles to cast his or her ballot. With India’s vast geography, this means that this year there will be 1.04 million polling stations with more than 2 million electronic voting machines.

About 11 million election workers will carry out the exercise, some traveling to remote snow-capped mountains, thick forests and isolated islands to administer voting. A lone voter in the Gir National Park in the western state of Gujarat, famous for Asiatic lions, gets his own polling station equipped with an electronic voting machine.

Federal security forces watch over polling stations, a mammoth undertaking that requires voting to be spread across a five-week period. Voting will take place on seven different days between April 11 and May 19, with dozens of constituencies casting ballots each day.

Votes are counted May 23 and the results announced the same day.

The ruling BJP, formed in 1980, won a rare absolute majority in 2014, securing 282 parliamentary seats. A nationalist party that claims allegiance to India’s Hindu majority, it has built itself up under Modi’s charismatic leadership into a force across the country – although one sometimes described as hostile to religious minorities.

The main opposition party, the Congress, has dominated Indian politics since independence from British rule in 1947. It is led by Rahul Gandhi, the fourth-generation scion of a political dynasty that includes India’s first prime minister, Jawaharlal Nehru, Gandhi’s great-grandfather.

Congress’ platform is secular and pro-poor, but its most recent tenure leading a coalition government from 2004 to 2014 was marred by corruption scandals and slow economic growth. The party is banking on dissatisfaction with Modi to turn the 2019 election into a close contest.

Regional parties, including some that compete only in one of India’s 29 states and are caste- or language-based, wield significant influence, especially when forming coalitions.

In 2014, half of all Indians voted for a party other than the BJP or Congress. But some of the registered parties don’t even field candidates, leading to allegations that they are merely a conduit for money laundering, because political donations are tax-exempt.

With rising numbers of jobless youth, concerns about unemployment are at the top of the political agenda. An official report leaked to an Indian newspaper indicated that nationwide unemployment has risen to a 45-year high.

India needs to create 8.1 million jobs a year just to keep the employment rate steady. But economists say that a sluggish economy, Modi’s controversial decision to remove high-value currency notes from circulation and a sweeping national sales tax may have hurt short-term growth.

Farmers are India’s biggest voting bloc. Modi promised to double agrarian incomes by 2022, but the farm sector has been hurt by bumper harvests and declining commodity prices.

Farmers have staged enormous protests across India’s biggest cities demanding loan waivers and guaranteed crop prices. Both major parties have rolled out welfare measures, with the BJP promising direct cash transfers and the Congress proposing a guaranteed minimum income for the poorest Indians.

Critics have accused Modi’s party of tolerating – and in some cases encouraging – violence by Hindu groups against religious minorities. An Amnesty International hate crime tracker – using reports from Hindi and English newspapers – has documented 721 reported hate crimes since September 2015, when a Muslim villager was lynched outside New Delhi for allegedly killing a cow, an animal that orthodox Hindus regard as sacred.

In 2018, Amnesty documented 218 incidents of alleged hate crimes, the vast majority of which were against Muslims – India’s largest religious minority – and Dalits, members of the lowest rung of India’s ancient caste system.

Social media is expected to play a huge role in the campaign in India, where about 430 million people own smartphones and 200 million use WhatsApp, the Facebook-owned messaging platform. One social media expert estimates that there are 87,000 WhatsApp groups aiming to influence voters.

Modi reportedly warned BJP lawmakers to add social media followers or risk losing their party tickets. WhatsApp has been criticized for being a vehicle to spread fake news, and has taken steps to curb misinformation ahead of the elections.