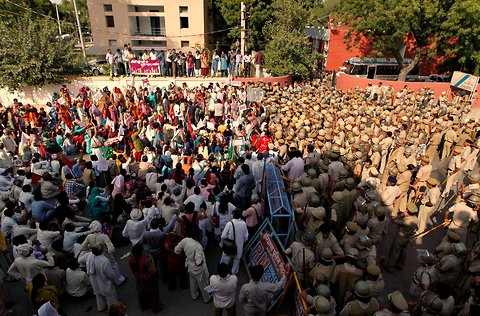 A protest in Rohtak on Monday condemning the rising incidents of rape and violence against women in Haryana. | Mustafa Quraishi/Associated Press

In Haryana, where a number of high-profile rape cases have attracted national attention in recent weeks, 800 protesters took to the streets on Monday to demand better policing and a safer environment for women.

“Women are no longer ready to take this kind of treatment meted out by a patriarchal system and a government that connives with the accused because they are powerful,” said Shabnam Hashmi, a trustee at Anhad, a human rights group that works in the Mewat region of Haryana.

Several rape cases reported in Haryana in recent weeks have attracted widespread attention for their severity, the fact that the victims were from lower castes than their attackers and a “blame the victim” response from local officials and village councils. Last week a teenage girl committed suicide after being raped, by setting herself on fire, and another victim’s father killed himself after he was shown a video of his daughter being raped.

While activists and local media have repeatedly quoted a figure of 17 rapes in Haryana in the past month, that number is probably low. There were 733 cases of rape reported in Haryana, population 25 million, in 2011, or an average of 61 a month, according to data from the National Crime Records Bureau.

Over the last year, the Haryana government has been criticized for their response a number of high-profile rapes and the state’s seeming inability to protect women. The Haryana spokesman for the Congress Party, Dharambir Goyat, was quoted as saying that he thought 90 percent of rapes were consensual, but he was later rebuked by the party for his statement.

On Monday, the Haryana Congress legislator Sampat Singh said, “Haryana has progressed economically, but it has not developed mentally and intellectually, leading to rising incidences of rape in the state.” Meanwhile, the West Bengal chief minister, Mamata Banerjee, said that the increase in rapes in India could be attributed to the fact that men and women interact with each other more freely than before.

Monday’s rally was led by the All-India Democratic Women’s Association, who were joined by the All India Dalit Mahila Adhikar Manch, the National Federation of Indian Women and the Center for Social Research.

Protesters in Rohtak held a public meeting on Monday where activists discussed possible solutions while the families of rape victims shared their stories. After the meeting, they marched to the district commissioner’s office and submitted a memorandum that demanded the government ensure quick and fair investigations into rape cases, set up fast-track courts to deal with sexual assault and rape cases and create more effective police forces.

“The protest was meant to express our anger and dissatisfaction at the Haryana government who has yet not arrested many rapists, and to pressurize the government to act,” said Ranjana Kumari, director of the Center for Social Research, who attended the protest.

The police attacked the crowd with sticks, she said, which caused a stampede that injured three people. “What was a peaceful meeting suddenly turned violent,” Ms. Kumari said.

In Delhi, the National Federation of Indian Women held a rally in a show of support for women of the Dalit caste, many of whom are victims of rape in Haryana.

“In this country, the biggest challenge for women is to safeguard their right to be born, and from that stage onwards women face all sorts of discrimination,” said Annie Raja, general secretary of the National Federation of Indian Women. “Even though internationally we have a reputation for being a developing country with prospects for economic growth, but for the women of this country, day by day we are living a more frightened life.”

Ms. Raja said that while each successive government promises to put in place new legislation to safeguard women, the government fails to enforce existing laws.

What especially angers women’s rights groups is the local authorities’ penchant for blaming the rapes on the victims. In September, a member of the state’s khap panchayat, a self-appointed council of village heads, said that in order to curb such crimes the marriage age should be lowered to 16, from 18, so that women won’t be tempted to satisfy their sexual urges elsewhere. Balwan Singh Nain, a 48-year-old farmer and khap member, told India Ink, “Women maintain a family’s honor. Not men. If she cannot keep her honor, it is solely her fault.”

Activists contend that the presence of khap panchayats undermines the system of law and order in the state of Haryana. “The problem is not just the numbers of women who are getting raped but the discourse after the rape and the response of the state,” said Kavita Srivastava, national secretary of the People’s Union for Civil Liberties, who attended the protest in Rohtak. “The khap panchayats are not just an embarrassment but part of the problem – they are reinforcing the unlawful behavior of these men.”

Those who report rapes often find themselves shunned by the local authorities. In a recent case that came to light on Saturday, a 13-year-old schoolgirl was allegedly raped over a period of four months by a fruit vendor outside her school in Fatehbad, a town in Haryana. When the girl’s mother lodged a complaint against the man, the school authorities reacted by expelling the girl and her two younger sisters. On Sunday, the school authorities said the three sisters had left the school on their own. However, after the girl underwent a medical examination that confirmed that she had been raped, the suspect was arrested.

“The whole attitude of the police is so anti-women,” said Ms. Srivastava. “There is the breakdown of the criminal justice system on one hand and the lack of an enabling environment for women on the other. In this kind of environment, there can be no justice.”

On Friday, the Haryana government announced several measures designed to reduce the incidence of crimes against women, including an increase in police patrols in rural areas. The government also opened a 24-hour hotline for women in the police control room in Panchkula district and is planning to set up one in every district.

“The idea is that if any woman calls saying that they have been harassed on the street, at college or elsewhere, we will send police help immediately,” said Meenakshi Sharma, a female constable who answered the women’s hotline in Panchkula, which has yet to receive any calls for help.

Ms. Sharma said that they did not receive any special training for manning the hotline, which is one reason that activists are dubious about the efficacy of such measures. “It is too little and too late,” said Ms. Kumari of the Center for Social Research. “Having a helpline is not enough. There has to be somebody on the other side to provide help. The Haryana police have to become much more effective if it hopes to actually protect these women.”