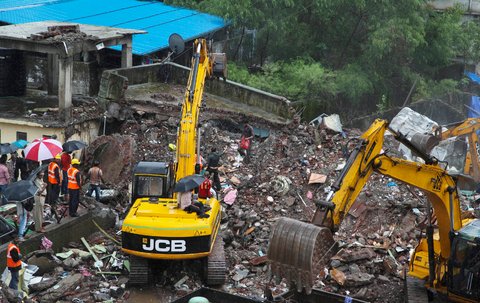 Rescue work in progress at the site of a building collapse in Thane district on the outskirts of Mumbai, Maharashtra, on June 21.Credit Divyakant Solanki/European Pressphoto Agency

MUMBAI— In India’s financial capital, the skyline is dotted with decrepit buildings that seem to be only a strong monsoon shower away from crashing to the ground.

The latest structure to collapse in Mumbai was a three-story building in the northern suburb of Thane, which caved in at 2:30 a.m. on Friday. Nine people were killed and 14 were injured as of Friday afternoon, said Sandeep Malvi, spokesman for the Thane municipal corporation. He said the civic authorities have yet to determine what caused the 35-year-old building to collapse.

Mumbai has seen an alarming number of building mishaps this year, but what is more troubling is that more structures are likely to be vulnerable to collapse as old ones crumble from neglect and new ones are poorly made.

Much of the shoddy construction that causes buildings to fall is done without proper permits. On April 4, an illegally constructed building in Thane caused the deadliest building collapse in India in decades. At least 72 people died and 70 were injured. The state government ordered an investigation, and the police charged two builders with culpable homicide. If convicted, they face a lifetime sentence in prison.

On June 10, a portion of the five-story Altaf Mansion in the Mahim neighborhood collapsed after heavy rains, killing 10 people. Rizwan Merchant, an advocate who lost three family members in the accident, filed a police complaint that blamed the owners of the building for failing to form a society to maintain the building, two residents for making illegal alterations and civic officials for negligence.

The city authorities contended that they had not received any complaints about changes made to the structure of the building. On Thursday, a sessions court in Mumbai ruled that the owners of the building, brothers Irfan, Sharif and Mohammed Furniturewala, were not directly connected to the collapse of the building.

While illegal construction mushrooms in Mumbai to accommodate a growing population, many of the legally built buildings are becoming uninhabitable. Several of the edifices in the older parts of Mumbai are over 70 years old, built in haste at a time when Mumbai was an up-and-coming commercial hub.

“There were opportunistic developers taking advantage of the surge in demand in metropolitan Mumbai,” said Naushad Panjwani, senior executive director of Knight Frank India, a real estate company. “While they were relatively modern buildings for those times, the quality of the construction was absolutely horrible as there was little regulation or governance.”

He added that cities like Pune and Kolkata, which were settled later, will soon face a similar predicament.

Milind Sawant, deputy municipal commissioner of improvements, said buildings that are 60 to 70 years old have simply surpassed their life cycle and need to be rebuilt. “The cost of maintenance is at times higher than the cost of redevelopment,” he said.

Newer buildings, however, often have structural problems as developers compromise on quality in favor of speed. “The problem is that land has become so valuable that people are building on the land quickly, just to get something in place, and not with the intention of occupying it or keeping the inhabitants in mind,” said Matias Echanove, co-founder of URBZ, an urban research collective. “The acceleration of this process means that substandard apartments are quickly put up for purely speculative reasons.”

Family members waiting for news of their relatives at the site of the building collapse in Thane district, on June 21.Credit Agence France-Presse — Getty Images

The gradual decay of buildings is most commonly a result of the lack of periodic maintenance, especially when the buildings fall under the Rent Control Act, which severely limits the amount a tenant’s rent can be raised. With buildings that have many longtime tenants, the rents can be so low that the landlord has no commercial incentive to renovate or maintain the structure.

Others blame the red tape involved in acquiring the necessary permissions to make small modifications to buildings, which leads frustrated residents to seek local contractors to make renovations without the advice of a structural engineer. “The focus of the civic authorities is not on safety but on checking who is making a small modification to the structure, so that they can pressure the person to pay a bribe,” said Rahul Srivastava, the other co-founder of URBZ.

Meanwhile, the scale of the problem remains unclear. According to a pre-monsoon survey carried out by Mumbai’s municipal corporation, there are 959 dilapidated buildings in the city that house 100,000 people. However, real estate experts say that this figure is probably an underestimation.

“According to the Maharashtra Housing and Area Development Authority, there are over 16,000 buildings which were built before 1940, so to say only about 1,000 buildings in the whole city are dilapidated is a bit of a stretch,” said Mahesh Khalap, associate director of strategic consulting at Jones Lang LaSalle India, a real estate research firm.

In a desperate measure preceding this year’s monsoon, the city’s civic chief, Sitaram Kunte, said residents of buildings that were declared dilapidated by the city authority had until June 15 to evacuate. If the residents did not move out by then, he said, the authorities would resort to extreme measures, like cutting off the electricity and water supply. According to Section 354 of the Mumbai Municipal Act, the civic administration has the authority to compulsorily evict residents from dilapidated buildings.

In many cases, residents are unwilling to move out of buildings deemed dangerous as they fear that they will lose their homes to bureaucratic delays in reconstruction. On the day of the deadline, 5,000 people protested against eviction notices, saying that they had not received the permission to repair their building privately.

“We face opposition in almost every building we try to evacuate,” said Mr. Sawant. “We tell them that there is a threat to their lives, and we tell them to look at cases like Mahim.”

Of the 78 dilapidated buildings owned by the city’s municipal civic body as listed in the pre-monsoon survey, 40 have been evacuated since April, he said.

In some cases, the residents of these buildings have no choice but to leave immediately for their own safety. On June 12, residents of the 33-year-old Raj Vaibhav apartments in Borivali had to abandon their homes in an emergency evacuation as cracks in the building surfaced overnight.

“The principle is in the right spirit, but the operational components are very difficult as the budgetary strength and the manpower of the authorities is limited,” said Mr. Khalap of Jones Lang LaSalle India.

Such inspections often meet resistance because residents are suspicious of the city government’s motives. “The structural audit could be seen as a way to open more land for policies of redevelopment being so vociferously being promoted by the developers and government,” said Rohan Shivkumar, architect and deputy director at the Kamla Raheja Vidyanidhi Institute for Architecture and Environmental Studies in Mumbai.

“Often, disasters are used as excuses to open newer areas for the forces of the open market without any concern for local communities and history,” he said. “Redevelopment in this mode merely would perhaps add to the burden on infrastructure without augmenting it.”