Debating the Death Penalty for Rape in India 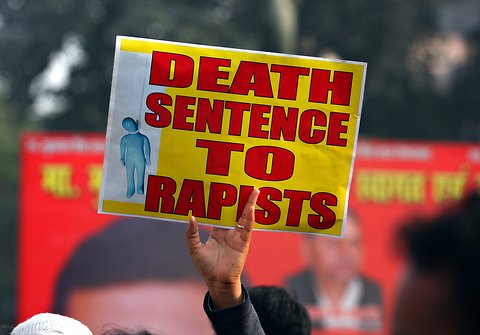 A protest held in Allahabad, Uttar Pradesh, on Wednesday in the wake of the recent gang rape in New Delhi. Credit: Sanjay Kanojia/Agence France-Presse — Getty Images

A gang rape in Delhi has revived the debate about which crimes merit the death penalty in India, as calls for justice for the victim have quickly morphed into demands that the six suspects in police custody be executed.

Such demands have come from protesters and politicians alike. In the capital, crowds at India Gate carried banners saying, “Hang the rapists – We want justice.”

Last week, the home minister, Sushil Kumar Shinde said in a statement that the government will take steps to amend the criminal law so that the death penalty could be applied to particular cases of rape like this one. In a speech in the lower house of Parliament, the leader of the opposition, Sushma Swaraj, also favored capital punishment for the rape suspects.

At the National Development Council in New Delhi on Thursday, Prime Minister Manmohan Singh said the “government has decided to review the present laws and examine the levels of punishments in cases of aggravated sexual assault.” A committee of eminent jurists, headed by Justice J.S. Verma, the former Chief Justice of India, has been formed to review these laws.

On Monday, the father of the victim said that the culprits should be hanged. “If they remain alive and are later freed, they will again commit such crimes,” he said. Petitions to execute the six men have rapidly circulated on social media, and a Facebook page titled “Hang the Rapists” had 1,437 “likes” as of Friday morning.

Capital punishment is legal in India though it is seldom exercised. According to a ruling by India’s Supreme Court in 1980, the death penalty can only be applied for the “rarest of rare” cases. In July this year, 14 former judges appealed to the president of India to use his powers to commute the sentences of 13 people placed on death row from 1996 to 2009, after the Supreme Court admitted that the 13 had been erroneously charged.

On Nov. 21, the Supreme Court called for a “fresh look” at the application of the “rarest of rare” criterion, saying that there had been “little or no uniformity in the application of this approach.” That same day, the death penalty was applied in India for the first time in eight years when Ajmal Kasab, the lone surviving gunman in the 2008 Mumbai attacks, was executed. Two days earlier, India had voted against a resolution in the United Nations General Assembly that urged members to abolish the death penalty.

In the case of the gang rape in Delhi, it is unlikely that anyone convicted of the crime will receive the death sentence, legal experts say. Currently, the minimum punishment for gang rape is 10 years in prison, with life imprisonment as the maximum. Under the Indian Constitution, one cannot receive a punishment greater than that prescribed by the law at the time of the crime.

“Jurisprudence is prospective, not retrospective, and in this case, the law will be applied the way it is at present,” said Pinky Anand, a senior advocate practicing in the Supreme Court of India who specializes in cases for women, constitutional law, and international law. If the law is amended, the change will apply only to the crimes that occur afterward. “We all condemn the incident, but there has to be some rationality in the statements made by politicians,” she said.

For proponents of the death penalty, the chilling possibility of an execution by hanging is seen as the ultimate deterrent to crime. “Nobody values anything more than his or her life, and any system that takes away your life will terrify you,” said Ms. Anand. “It is human psychology in addition to criminal jurisprudence.”

However, critics of capital punishment say that there has not been any research proving that the death penalty is effective in preventing crime. A robust criminal justice system, they say, would act as a more effective deterrent against rape or sexual violence.

“There must be the feeling that there are a government and judiciary who will take such crimes seriously and nobody will be allowed to get away with committing such heinous crimes – that will serve as a deterrent,” said Annie Raja, general secretary of the National Federation of Indian Women. “If you are able to create confidence in your judicial system and your policing system, then people will not need to demand the death penalty.”

The low conviction rate for rape means that very often cases either languish in the Indian courts for years or those arrested end up walking free. “The real problem is the conviction rate, the delay in the administration of justice, the lack of sensitivity of the police with dealing with such matters, the lack of security in the city,” said Jayati Ghosh, a professor of economics at Jawaharlal Nehru University, who was present at the protests in New Delhi. “Last year, the conviction rate in New Delhi for those who appeared in court for rape cases was less than 5 percent. The problem lies in the certainty of punishment rather than the severity.”

As the legal process for death penalty cases is significantly longer and more complex than for cases of life imprisonment, lawyers, activists and academic experts fear that applying the death penalty for rape will only result in more acquittals than convictions. “The whole legal process to establish is so rigorous if it is for death penalty,” said Ranjana Kumari, director at the Center for Social Research. “We currently have approximately 40,000 cases of rape pending in different courts in the country, while we have only given 46 death penalties so far since 1947.”

Legal experts say that in many cases, the threat of capital punishment might encourage rapists to kill their victims in order to eliminate the prime witness.

“I believe that the most stringent punishment possible must be applied in such cases, but in this case, if you impose the death penalty, the criminal will have the motive to commit murder to cover up the crime and eliminate evidence,” said Rana Parween Siddiqui, a member of the Bar Council of Delhi who practices in the High Court and the Supreme Court and specializes in civil and criminal law. “Instead, the criminal must be given life imprisonment without the possibility of bail or parole under any circumstances and there should be chemical castration.”

Another argument frequently made against the demand for the death penalty in a rape case is that such a demand ultimately equates rape with death. A statement by a collective of women’s groups, progressive groups and individuals condemning sexual violence and opposing death penalty on Kafila blog reads:

The logic of awarding death penalty to rapists is based on the belief that rape is a fate worse than death. Patriarchal notions of ‘honor’ lead us to believe that rape is the worst thing that can happen to a woman. There is a need to strongly challenge this stereotype of the ‘destroyed’ woman who loses her honor and who has no place in society after she’s been sexually assaulted. We believe that rape is a tool of patriarchy, an act of violence, and has nothing to do with morality, character or behavior.

Those on both sides of the death penalty debate do agree that in order to be effective, justice must be swift, as delays not only allow rapists to believe that they are immune to prosecution but also dissuades their victims from accessing the legal remedies available to them. “Enhancing the efficiency of the system will be more effective than enhancing the punishment,” said Ms. Anand, the Supreme Court advocate.