For the Crowded Masses, a Push to Provide More Escape Patches In Mumbai, overcrowding and industrialization have led to an increase in respiratory diseases, a study reports. Credit Kuni Takahashi for The New York Times

MUMBAI, India — Not far from where Anusaya Nair lives, a room that measures barely 5 feet by 5 feet, is her main escape: a 9,200-square-foot park, boxed on three sides by a ramshackle garage, tenement housing and an apartment complex. A few women take their evening stroll on the walking track circling the park; elderly companions exchange gossip on a handful of scattered benches; neighborhood children play on a swing set at the back.

Ms. Nair, 43, lives in the Ambedkar Nagar slum, like many of the domestic workers who take care of the area’s high-rise apartment buildings. She spends her days cleaning the homes of more affluent residents of southern Mumbai and regards her twice-a-week visits to the garden as a welcome relief from her routine.

“I’ve liked gardens since I was a child and always try and find some time to visit,” Ms. Nair said. “I like the natural beauty. The mind finds peace.”

Small as it is, the relatively new garden, off First Pasta Lane in the city’s Colaba neighborhood, is a luxury in Mumbai: a green space accessible to anybody, where people can unwind without being jostled. Much of the open space in this fast-growing metropolis of more than 13 million people is inaccessible to typical residents, and much of the rest has been eroded or eliminated by commercial development.

A new study reports that Mumbai has only 11.6 square miles of open space, with just 3.9 square miles available to most of its residents. That is about nine square feet per person. 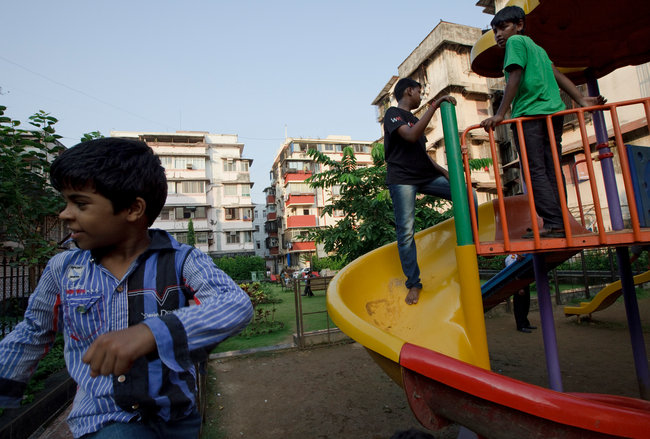 Children playing in a 9,200-square-foot park, boxed on three sides by buildings, in Mumbai. Credit Kuni Takahashi for The New York Times

“Open spaces are like the lungs of the city,” said Ashoke Pandit of Save Open Spaces, an umbrella organization of more than 30 civic groups that advocates for more open spaces. “If you can’t breathe, you can’t survive.”

India’s growing middle class and the rich have plenty of places to escape the chaos and crowding of India’s most important business center. Developers typically build play areas, community halls, gardens and swimming pools into the housing complexes where most of them live. But a vast majority of Mumbai residents have access to only tiny scraps of green like Ms. Nair’s park or a handful of large open spaces, most of them in the historic downtown area, that are swarming with crowds.

In a study of Indian cities, the World Health Organization found that a number of environmental factors have led to a rise in respiratory infections, asthma, malaria, diarrhea and neuropsychiatric disorders. Citing the lack of open spaces and greenery, Dr. Agam Vora, secretary at the Environmental Medical Association here, said, “Overcrowding and industrialization have led to a significant increase in respiratory diseases such as asthma, bronchitis and pulmonary fibrosis in Mumbai.” Based on his own experience, Dr. Vora estimated that the incidence and severity of asthma have increased by roughly half in the last decade.

Several local nonprofit groups have taken up the cause of more open space. One, CitiSpace, has worked with residents’ associations and lobbied local officials to restore parks and open spaces in many parts of the city.

Last month, the Mumbai government approved a plan to create a 23-acre “city forest” in the northern coastal neighborhood of Juhu, a favorite destination of rich and poor alike. The plan, conceived and designed by P. K. Das and Associates, a Mumbai architecture firm, calls for the planting of 1,000 trees along a creek. Now a barren ground fallen into disuse, a stretch in the area was first suggested in 1987 by a government official. But it languished for 25 years before Mr. Das and citizens’ groups in the area revived the idea.

The $4.6 million project, which will take a year to complete, was financed through a government fund that provides money to members of Parliament to help build public facilities in their districts. 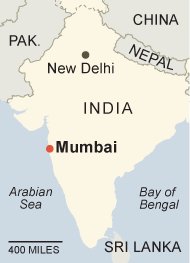 Mumbai has approved a plan for a 23-acre “city forest.” Credit The New York Times

After fierce lobbying by neighborhood associations, Mumbai’s government agreed to budget $28 million for gardens and open spaces this year, up from $24 million last year. But about half the money is aimed at a renovation of the city zoo, leaving little for parks and gardens in the rest of the city.

The city government is revising Mumbai’s development plan, a 20-year blueprint for land use. In the past, bureaucrats and politicians drafted the plan behind closed doors with little input from residents.

“There is a need to cultivate a sensitivity towards environmental features when creating the development plan,” said Ashwini Bhide, a newly added commissioner at the Mumbai Metropolitan Region Development Authority. “Development and environment have to go hand in hand.”

But many experts say the plan itself is not the problem. “We have open spaces clearly set aside in the development plan for the city,” said Ashutosh Limaye, head of research at Jones Lang LaSalle, a real estate company. “What we lack is proper implementation. Political interference and profiteering are getting in the way of that.”

The tiny parcel where Ms. Nair unwinds, for instance, was bought by the city in 1974 to create a pocket park. But officials initially leased the land to a popular local fast-food chain, a car-repair shop and a warehouse. Residents learned that they had been deprived of a planned park only when they filed a request under India’s freedom of information law in 2006 to find out more about the restaurant, Kailash Parbat, which many complained was creating too much noise and traffic and a disturbing odor. The owner of the restaurant did not return calls seeking comment.

In 2008, the First Pasta Lane Residents’ Association took the city to court. The case wound its way to the Indian Supreme Court, which ruled in the group’s favor in 2010. The garden finally opened to the public in July 2011.

“It was an uphill struggle all the way; our lawyers made over a hundred appearances in court,” said Vijay Advani, joint secretary of the First Pasta Lane Residents’ Association. “But today the children of the neighborhood have a place to play — and they relish it.”