As COVID-19 spreads, India tries to control the narrative by targeting journalists 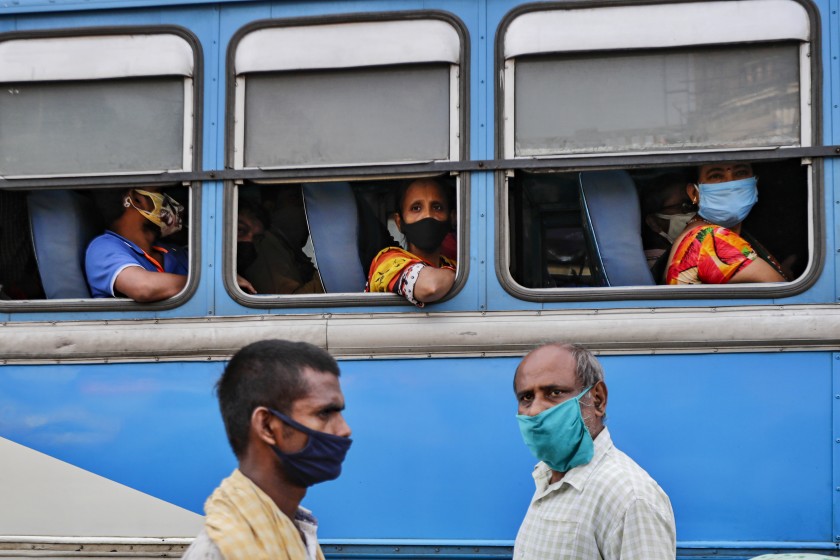 Commuters in a bus and pedestrians on the street wear masks in Kolkata, India. (Bikas Das / Associated Press)

Four days after India locked down in late March to fight the spread of the coronavirus, Jagat Bains got a call from a group of migrant working families in the northern state of Himachal Pradesh. With construction work having ground to a halt, the laborers had run out of money and their children were going hungry.

Bains, a freelance reporter for a regional television channel, drove to the encampment and found two dozen people hunkered down in shanties consisting of plastic sheets held together by bamboo. They said local officials had failed to give them food they were supposed to receive under a government relief program, and that when they tried to fetch water, police beat them because they were violating the lockdown.

Bains’ report on the workers was posted on the YouTube channel of a small local news outlet March 30. That evening, he learned that police were opening an investigation against him on criminal charges including spreading false information.

“They are trying to pressure and harass any journalist who was writing stories criticizing them,” said Bains, 33.

Amid the escalating COVID-19 crisis, Indian journalists reporting on government mismanagement of the pandemic are facing prosecution or intimidation from authorities while at the same time being hindered by restrictions on accessing information.

Since March, at least 55 journalists have been arrested, investigated or questioned by police across India in connection with their COVID-19 reporting or for alleged lockdown violations, according to a report by the Rights and Risks Analysis Group, a New Delhi-based think tank.

Authorities have opened criminal investigations against many of the journalists for allegedly publishing false reports and for violating the Epidemic Diseases Act, a colonial-era law that grants the state sweeping powers. In conjunction with other statutes, the law has been cited by authorities threatening journalists with fines and up to two years in prison.

“The space for press freedom has been shrinking since the COVID-19 crisis began in India,” said Daniel Bastard, Asia-Pacific director at Reporters Without Borders. “Journalists have been arrested for talking about the effects of the lockdown on the poorest sections of the Indian population.”

For Indian Prime Minister Narendra Modi, who is battling the world’s second-worst coronavirus outbreak — with more than 6.4 million people infected and the most new daily infections — controlling the media narrative has been a top priority.

On March 25, Modi initiated a nationwide lockdown, widely described as the toughest in the world, stranding hundreds of thousands of low-wage migrant laborers without work and with no way to get back to their rural homes.

Hours before the announcement, Modi held a video conference with the owners and editors of 20 mainstream news outlets and asked them to publish “inspiring and positive stories” about the pandemic.

A week later, Modi’s government asked the Indian Supreme Court to direct media outlets to publish stories on the disease only after ascertaining the government’s “true factual position.” Although the subsequent order issued by the court did not prohibit independent reporting, it has served as a warning to journalists — along with a government Twitter account that tweets “corrections” to news stories regarded as incorrect.

Sanjoy Ghose, a New Delhi-based lawyer, said the government’s broad legal authority and the court order “empower the government to then embark on this mission of ensuring that journalists who are reporting uncomfortable issues are booked. They have such vast powers that you don’t even need to declare a formal emergency.”

But most journalists have persisted in reporting the news.

In April, a month after his original report for the regional channel News18 Himachal, Bains filed a report based on surveillance footage showing that private vehicles were crossing state lines in violation of lockdown orders. Days later, he got a call from another group of migrant workers who said they had blocked a highway to protest being denied food by passing government supply trucks. Bains hesitated to cover the story until his editor assured him the channel would support him.

“There was some fear in my mind,” said Bains. “I thought that if I highlight the failings of the government, they might charge me again.”

The day after his report on the protest aired, local officials finally provided food to the migrants. But that evening he got a call from police who said two more criminal investigations had been opened against him, one for each story.

His curfew waiver was also revoked, making it difficult for him to report until the lockdown was eased May 1. Rohit Malpani, the superintendent of police for Baddi district, where Bains is based, did not respond to requests for comment .

Most journalists targeted in the crackdown — like Bains — report for regional-language media far from the glare of big cities. They have the least protection and fewest resources for legal defense, and their cases have often gone unnoticed by advocacy groups.

In July, Gammat Bhandari, publisher of Parshwabhoomi, a respected regional newspaper in the western state of Maharashtra, was arrested at his office after he wrote a story about a police officer who violated travel restrictions. Bhandari was released after a night in custody but his laptop was seized and hasn’t been returned.

Last month, Parashar Biswas, a newspaper reporter in the northeastern state of Tripura, was beaten by unidentified individuals after the state’s top official — a member of Modi’s Bharatiya Janata party — criticized “overexcited” journalists for exaggerating the threat of COVID-19.

In a case that has drawn outrage from global press freedom groups, Supriya Sharma, executive editor of the news website Scroll.in, was charged with defamation and negligence for reporting on hunger and unemployment in a village near Modi’s parliamentary constituency of Varanasi.

Such charges rarely bring convictions, but India’s slow-moving justice system means that cases can drag on for years.

Critics say the accusations and arrests have had a chilling effect on media outlets. Journalists say officials are providing little transparency on issues such as access to care, diagnostic testing and health insurance.

Since Modi came to power in 2014, press freedom has declined and India was ranked 142nd out of 180 countries — two spots lower than the previous year — in the 2020 press freedom index compiled by the watchdog group Reporters Without Borders.

“Journalists in India have always faced attacks and intimidation, but what we’re seeing right now is quite intensified and more brazen,” said Aliya Iftikhar, senior Asia researcher at the international Committee to Protect Journalists (CPJ). “There is definitely a different, harder environment for journalists under the Modi administration.”

That month, the CPJ wrote to police officials in Himachal Pradesh asking for comment on the cases filed against Bains and two other journalists but said it received no reply. Bains said that following pressure from advocacy groups and support from the state’s chief minister, police have not pursued the charges against him.

Published in The Los Angeles Times on October 4, 2020.

Previous post
India’s Biggest Slum Successfully Contained COVID-19. But Can Its Residents Survive the Economic Collapse?
Next post
Battle for Breath: Clearing the air between India and Pakistan