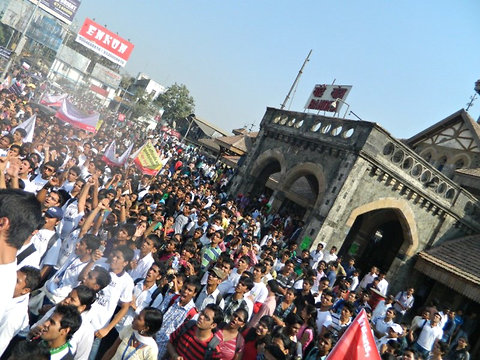 Mumbai’s citizens went to the polls on Thursday to elect candidates for the Brihanmumbai Municipal Corporation (BMC), Mumbai’s municipal body amid a growing grassroots effort to encourage students, first-time voters and unregistered voters to come out and vote.

College students organized vote drives, Bollywood celebrities wroteencouragement on Twitter and local restaurants promised free goodies for voters. Social media buzzed with election talk and messages about how and why to vote.

The effort seems to have paid off only marginally. Mumbai’s voter turnout, at 45 percent of registered voters, was still lower than much of the rest of the country, but up 3 percent from 2007, an increase of more than half a million people. However, the population of Mumbai is estimated to have increased about that much in the past five years. As is the norm in Mumbai, the posh areas of the city had much lower voting percentages (turnout was 34 percent in Colaba) while turnouts in slums across the cities were the highest.

“In the affluent areas of Mumbai people once again didn’t come out to vote,” said Shyama Kulkarni, a trustee for Action for Good Governance and Networking, a group that tries mobilize voters. “They grumble the most, but then in the end they feel that this is not their city- it is very disturbing. We have a long way to go.”

With an annual budget of more than $4 billion, Mumbai is India’s highest-spending municipal body, and stages the country’s most fiercely contested civic elections. There were 2,232 candidates competing for 227 electoral wards in Thursday’s election. Polling was also held across nine other municipal corporations across the Indian state of Maharashtra, with all results being declared on Friday.

Control of the municipality office is keenly coveted, and has been a stronghold of the Hindu nationalist Bharatiya Janata Party (BJP)-Shiv Sena alliance since 1996. In the run-up the current election Mumbai has seen a flurry of campaigning by each of the three main contestants; the Congress party – Nationalist Congress Party (NCP) alliance, the BJP-Shiv Sena alliance and the regional Maharashtra Navnirman Sena (MNS). This year’s elections were held against a background of growing disenchantment at the lack of governance and infrastructure plaguing the city.

Grassroots campaigners said that many Mumbai residents traditionally don’t vote, despite their dissatisfaction, because the registration process is difficult and they don’t believe their vote will make a difference in the long run.

“There is a frustration with the process of registration, which is quite cumbersome and requires you to fill out many forms, gather several documents and visit the office,” says Keya Madhvani, 23, who works at Acumen Fund. In 2007 when Ms. Madhvani was an economics student at Mumbai’s St. Xavier’s College, she started a campaign called iVote, along her friend Natasha Kewalramani, to help college students and first-time voters register their names on the electoral rolls in time for the 2009 state elections.

“There is a genuine sense of apathy with the situation combined with a feeling of disempowerment,” Ms. Madhvani said. “People say things like – what is one vote going to do, all the politicians are just going to buy votes, anyway. There is also a general conception that the quality of candidates is low, many hold criminal records and don’t tend to be highly educated.”

Private initiatives aimed at making it easier to vote and exciting people about the process seemed to blossom this election.

The Web site mumbaivotes.com provides a platform for citizens to search for their names, constituency and local corporator candidates. To help voters make an informed choice, Action for Good Governance and Networking in India worked with student volunteers to distribute information on candidates.

Rizvi College, located in Mumbai’s Bandra area, ran a 10-day voting awareness campaign complete with poster competitions, debates, impromptu speeches, a cultural program, a protest march and a dummy voting campaign. “To be honest I didn’t care much before being involved with this campaign about who stood for elections and if my vote counted,” said Sunita Iyer, 21, a first-year law student at Rizvi who voted for the first time. “This helped me realize that even if today we feel there is no one eligible to vote for, if we start voting we can get into the system, and influence future candidates.” 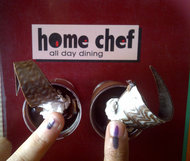 Home Chef, a cafe in Mumbai, on Thursday offered free chocolate mousse to those who showed up at the bakery after getting their finger inked at a polling station.Courtesy Home Chef

Restaurants even offered freebies to entice people to vote. McDonald’s put up posters that read “Cast a vote, get a Coke float” for Mumbai residents who could prove that they had voted. “Vote today! Show ur finger and get a free finger-licking chocolate mousse @home chef,” wrote Aditi Kamat on her Facebook wall. Ms. Kamat, 28, is a partner at the restaurant Home Chef and votes regularly. The café had given out 75 free chocolate mousses by Thursday afternoon. “I think people in Mumbai are politically aware but don’t want to do their bit. I was just trying to provide a little incentive, and people really appreciated it.”

On Thursday, the topic #BMCElections was trending on Twitter, and Twitter users offered help with the process and encouraging words. Twitter handle @b50 “Bombay Addict” gave out tips for people to find their polling booth, “Tip: The rolls are classified by buildings. So search for the name of your building and nearby. I found mine in 5mins.”

On Facebook and Blackberry messenger people updated photos of the ink stain on their fingers and put up status messages such as “Vote ppl!” “Election day!” “All my lovely mumbaikars plz go vote tomorrow!” “Opportunity to cheer for better roads in Mumbai!” “Today’s not just a holiday folks – exercise your vote!” A poster hung outside a window on Mumbai’s Peddar Road reads, “For five years – we got the middle finger. This election, they must see the power in our index finger.”

Despite the strong works, youth in Mumbai seem to feel “Why should I vote, all the candidates are bad,” Ms. Kulkarni said. “What they don’t realize is that if you don’t vote then the same people continue to be elected.”


Next post
In India, A Surge in Female Voters