In Bihar, Economic Concerns Are Tied Up in Caste Politics 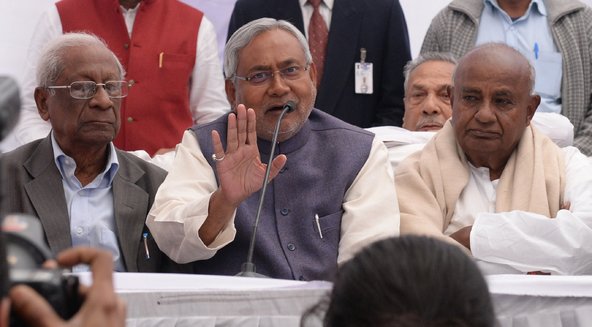 PATNA, India — In Bihar, one of the poorest states in India, voters in this year’s elections have the economy foremost on their minds, but in a state where the most socially disadvantaged sections of society make up a majority of voters, even economic issues are tied up with caste politics.

Sachidanand Sharma, who heads the political science department at Patna University, said development has become a central issue and a buzzword for every political party in Bihar during the campaign. “For the first time, in this election people in Bihar are talking of voting on the basis of political parties and issues, and not solely on the basis of caste and religion as was the norm in previous elections in the state,” Dr. Sharma said.

Yet Sudha Pai, a professor at the Center for Political Studies at Jawaharlal Nehru University in New Delhi, said that voters were also mindful of how politics operate in the state government.

“Even the issue of development in Bihar is to some extent tied up with caste in the sense that people look into who benefited from government policies and who did not, and promote a politics of patronage on that basis,” Dr. Pai said. “It is not that people only look at the caste of a candidate and vote, but it’s the fact that caste politics seems to determine a lot of the decisions that governments make and the way that politics functions in the state.”

In the six phases of voting in Bihar, which will send 40 legislators to the Lok Sabha, or lower house of Parliament, three groups are battling it out: the Janata Dal (United), which leads the state government; the Bharatiya Janata Party in alliance with the Lok Janshakti Party; and a coalition of the Rashtriya Janata Dal, the Indian National Congress and the Nationalist Congress Party.

Nitish Kumar of the Janata Dal (United), who has been chief minister of Bihar since 2005, has campaigned on the platform of bringing development, good governance, and law and order to Bihar.

However, Mr. Kumar has also worked to gain support among those classified as members of the lowest strata of society, the Mahadalits and the extremely backward castes, who make up 44 percent of the state’s 62.1 million voters.

Having severed a 17-year alliance with the Hindu nationalist Bharatiya Janata Party, Mr. Kumar is also vying for the vote of the Muslim community by emphasizing his secular politics.

The Lok Janshakti Party chief, Ram Vilas Paswan, also says he represents the aspirations of all backward castes, who make up 22.5 percent of the vote in the state, while the Bharatiya Janata Party has support among the upper-caste Hindu voters, political analysts say.

Meanwhile, the Rashtriya Janata Dal’s leader, Lalu Prasad Yadav, has traditionally relied on the support of Muslims and Yadavs, a backward caste community.

In conversations with citizens on the streets of Patna, the state capital, on Wednesday, the day before the second phase of the elections, the economy and the quality of life came up as the most important election issues.

“The common man in Bihar is distraught because of the rising costs, poverty and corruption,” said Binay Ram, 65, who works for the city’s municipal corporation. “People want change in this election. People will vote according to who they think can provide good leadership to the state.”

Many said that although politicians spoke of development, the poor in the state did not benefit from economic growth.

“Rising prices have made life terrible for poor people in the state; all these governments work for the rich,” said Manju Devi, 30, who washes dishes in people’s homes and makes 2,000 rupees, or $30, a month, on which she supports two children. “There needs to be progress that includes the poor people of the state. The government needs to improve security for women like me.”

However, people said, caste and community allegiances would still guide voters’ decisions. “Even today, there is a lot of prejudice on the grounds of caste in Bihar,” said Mohommad Hasan, 37, who works as a tailor in the Maurya Complex in Patna. “People believe that if they vote for someone from their community, then the person will work for their betterment.”

Deepak Kumar, 34, who owns a small business in Patna, said caste consciousness is inherent in Bihar people’s thinking. “It is the basis on which our society is organized,” he said. “Political parties are capitalizing on this, and instead of working for development and the advancement of the whole society, each politician claims to be protecting the interests of some caste or community.”