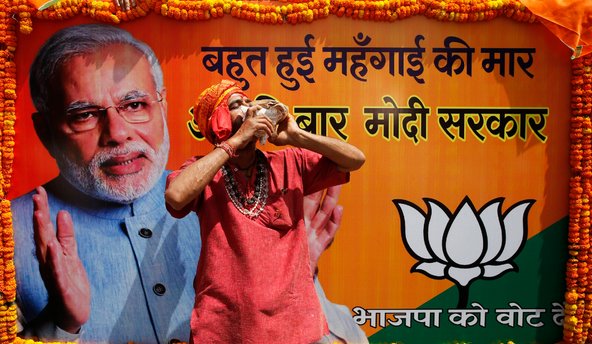 MUMBAI, India — Even as the Bharatiya Janata Party’s candidate for prime minister, Narendra Modi, has attempted to distance himself from his party’s right-wing Hindu nationalist ideology and focus on economic development, polarizing speeches by party members and allies dominated headlines early this week.

While campaigning in the eastern states of Bihar and Jharkhand on April 18, Giriraj Singh, a B.J.P. politician from Bihar, reportedly said: “Those looking to prevent Modi’s (rise to power) are headed for Pakistan. In the days to come, there will no place for such people in India or Jharkhand.”

At a rally organized in Mumbai on April 21, Ramdas Kadam, a leader of the B.J.P.’s alliance partner in the western state of Maharashtra, the Shiv Sena, shared a stage with Narendra Modi as he said that Muslims who were responsible for vandalizing police vehicles, damaging public property and attacking policewomen during a rally in 2011 “will not be spared”. He added: “Within six months of becoming the prime minister, Modi will take action against those Pakistanis who have beheaded our soldiers.”

Mr. Modi and senior leaders of the Bharatiya Janata Party have responded by dissociating themselves from the speeches, and publicly disapproved of the controversial statements made. On April 22, Mr. Modi tweeted, “I disapprove any such irresponsible statement & appeal to those making them to kindly refrain from doing so,” adding: “Petty statements by those claiming to be B.J.P.’s well wishers are deviating the campaign from the issues of development & good governance.”

But some analysts say that the issue of Hindu nationalism is central to the party’s identity and election strategy, try as Mr. Modi might to distance himself and project economic development as his main plank. Now that the election has entered its home stretch, with just three more polling phases to go, those analysts say that the party has some strategic interest seeking to secure as many votes as possible, by any means.

Uttar Pradesh and Bihar, two states that control more than one-fifth of the seats in parliament, go to the polls in six phases each — and each has three more phases to go.  As two of the electoral powerhouses of the country, they provide a strong indication of the Bharatiya Janata Party’s ability to win votes at the national level. Traditionally, the Bharatiya Janata Party has had difficulty overcoming strong caste identity politics that have fragmented the Hindu vote, but analysts say they are hoping to promote a pan-Hindu identity to capture large portions of these two states.

“The B.J.P. is operating with a two-pronged approach where they are pushing the agenda of development at a national level,” said Alakh Sharma, director for the New Delhi-based Institute for Human Development. “But at a local level, wherever the local leaders think it is needed, in states like Uttar Pradesh and Bihar, they are trying to increase religious polarization to consolidate Hindu voters.”

In Uttar Pradesh, Mr. Modi’s close aide, Amit Shah, gave a speech to Hindu Jat farmers in which he urged them to vote to “take revenge” for bloody riots in September that killed at least 60, both Jats and Muslims, and displaced more than 50,000 Muslims.  Mr. Modi did not distance himself from Mr. Shah’s comments.

Some have said that the statements of the past week by politicians with a much lower profile than Mr. Shah were merely cases of minor politicians voicing their personal views, not to be taken as representative of the party.

“People understand that some of these leaders speak without putting too much thought into what they are saying and since they are not very senior leaders it is not denting the image of the party nationally,” Sanjay Kumar, a political analyst and director at the Center for the Study of Developing Societies, said. “Any party of this size would have factions within the party and people with different leanings, ideologies and thoughts. So, yes, there are people within the B.J.P. who are strong hard-liners but there are also soft people.”

But others point out that Rashtriya Swayamsevak Sangh, a right-wing Hindu organization associated with the B.J.P., has helped organize the campaign.

“Their aim is that the primary identity of an average voter in this part of the country is being Hindu, not being the particular caste that he belongs to,” said Varghese K. George, the political editor of The Hindu, a national daily.

Mr. Modi has regularly tried to dispel this idea in speeches on the campaign trail.

At a public gathering in New Delhi in October, he said: “My image does not permit to say so, but I dare to say. My real thought is — Pehle shauchalaya, phir devalaya,” a phrase which translates as: “First build toilets, then temples.”

Part of the the reason why Mr. Modi is unable to dispel a reputation for divisive politics is that he presided over Gujarat as its chief minister when the state saw some of the worst Hindu-Muslim violence in the country, over three days in 2002, which left 1,000 people, mostly Muslims, dead.  Another is that, although he has largely projected a gentler image in recent months, he has not been above divisive rhetoric himself on the campaign trail, especially in locations where religious tensions run high.