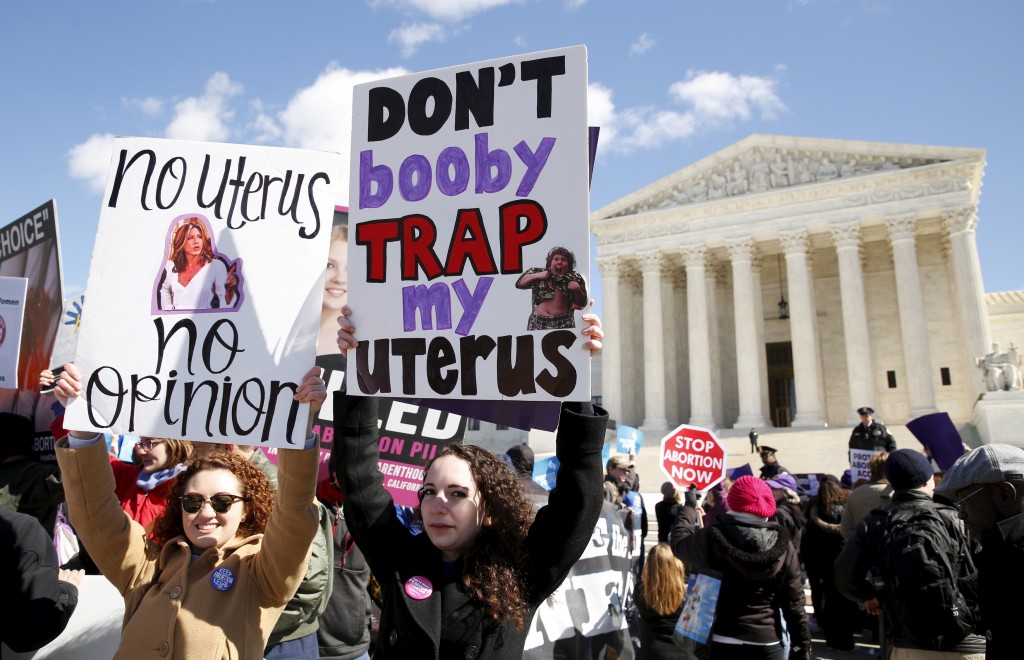 A preview of what’s to come. (Reuters/Kevin Lamarque )

While president-elect Donald Trump has been busy declaring his intention to overturn Roe v. Wade and appointing an attorney general with a questionable record on women’s rights, one state is quietly instituting laws that would curb women’s reproductive rights sooner than anything Trump could do.

On Monday, Texas finalized new laws that would require women who have miscarriages or abortions to bury or cremate their fetal and embryonic tissue. Abortion clinics, hospitals, and other healthcare providers would no longer be permitted to dispose of fetal remains in sanitary landfills, irrespective of the gestation period. The proposed law would take effect on Dec. 19, according to a report by the Texas Tribune.

Since the rule was initially proposed in July, there has been fierce public debate over the potential impact it would have on reproductive healthcare. The state’s health commission said that the new law would result in the “enhanced protection of the health and safety of the public.”

The medical community and reproductive rights advocates have aggressively opposed the law. “This rule provides no public health benefit, just like the state’s abortion restrictions that the US Supreme Court struck down in June,” said Blake Rocap, legislative counsel at NARAL Pro-Choice Texas, in a statement. “This is another in a long line of politically motivated attacks that make it harder for Texans to access abortion.”

While the new policies were approved under the rule-making authority of the state health department, they still need legislative approval before they go into effect. The proposal has wide support amongst Republican lawmakers, but during a 30-day public comment period in October, over 35,000 comments were submitted to the state’s Health and Human Services Commission.

Greg Abbott, the Republican governor of Texas who approved the new rules on Monday, said in a fundraising email this past July that fetal remains should not be “treated like medical waste and disposed of in landfills.” Don Huffines, a Republican state senator, said “For too long, Texas has allowed the most innocent among us to be thrown out with the daily waste.”

When new rule was first proposed in July, the Funeral Consumers Alliance of Texas wrote a letter asking who would be responsible for the costs of these burials. At $2,000 each, the Alliance estimated $96 million a year would be spent on these fetal remain burials.

According to health department spokesperson Carrie Williams, that would be the responsibility of abortion clinics and healthcare facilities. ”What we found through our research is that the proposed rules won’t increase total costs for healthcare facilities,” Williams said, adding that the cost of the burial would be offset by the money currently spent on “transportation, storage, incineration, steam disinfection and/or landfill disposal.” If the new rules do raise the operating costs of clinics, they might be forced to raise prices for their services, further curbing access to abortions in Texas.

In response to criticism, state health officials clarified in the final version of the new rules on Monday that the law does not apply to miscarriages or abortions that take place at home.

The new rules are also likely to be challenged in court, as ACLU of Texas and the Center for Reproductive Rights have warned that they ignore constitutional limits.

The law was proposed by the state health officials just days after the US Supreme Court struck down parts of House Bill 2, a Texas abortion law that had forced the closure of numerous abortion clinics across the state. A court found unconstitutional provisions of the bill requiring doctors that carry out abortions to have hospital admitting privileges and that clinics meet standards of surgical centers.

Since then, Texas lawmakers, perhaps emboldened by the prospect of a conservative leaning Supreme Court, have proposed a number of bills meant to deter women who are seeking abortions. On November 14, the first day for filing legislation for the upcoming session, lawmakers filed three proposals that would restrict women’s reproductive rights, including one measure that would ban all abortions regardless of fetal abnormalities.

Texas isn’t alone. Between January 1 and July 12, 2016, states passed 46 new abortion restrictions, according to the Guttmacher Institute. With the possibility of a conservative Supreme Court, the defunding of Planned Parenthood and lack of free birth control if the Affordable Care Act is repealed, women’s reproductive rights across the US could begin to look a lot like Texas.