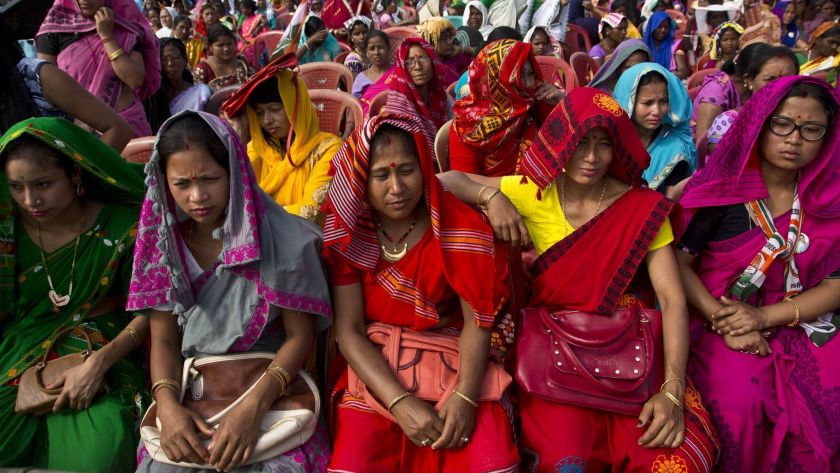 “For our party, mahila shakti” — women’s power — “is important,” he told the women’s wing of his Bharatiya Janata Party last month. “For us, whether it is in an organization, or in government or in the framing of programs, it is women first.”

Politics in India — where only 25% of women participate in the workforce — has historically been a man’s game. But with voting set to begin Thursday in a multi-stage election that will determine whether Modi and his party remain in power, analysts say that women could play a decisive role.

“Political parties are starting to treat women like a vote bank — a constituency that is to be wooed,” said Milan Vaishnav, senior fellow and director of the South Asia Program at the Carnegie Endowment for International Peace.

“Because many women have not traditionally been active in the political process, they view them as swing voters,” he said. “If you get them to swing your way, that can be what tilts the scales in an election.”

The country has already witnessed a recent surge in female electoral participation. In the 2014 elections that brought Modi to power, voter turnout among women reached a historic high of 65%, just shy of the 67% for men. In half of India’s states, women voted at higher rates than men.

Representation in office is a different story. Women occupy few prominent positions at the national and state levels and make up less than 12% of lawmakers in the lower house of parliament.

Though India has had a female prime minister, the long-serving Indira Gandhi, who was assassinated in 1984, she was the daughter of India’s first prime minister, Jawaharlal Nehru, and seen as more of a dynast than a feminist.

But the potential power of women at the polls became apparent in 2015. At a state election campaign event, Nitish Kumar, then running for chief minister of the impoverished northern state of Bihar, was asked by a female constituent if he would promise to ban alcohol, a longstanding demand of women’s collectives there that have seen alcohol abuse harm their families.

Kumar agreed, a move that helped bring more women than men to the polls and propel him to victory. He proceeded to keep his promise and institute prohibition in the state.

While Modi and his party — the BJP — ran on a platform of economic development in 2014, this time around they have emphasized their welfare programs, especially for poor women.

One program has provided subsidized cooking gas cylinders to millions of poor families to replace smoky, heavily polluting wood fires — and was credited with helping the party win state elections in Uttar Pradesh, India’s most populous and politically important state.

Another program, which was created by an opposition party and expanded by the ruling party, has furnished 56.3 million rural women with loans worth about $27 billion.

The party has also touted its efforts to provide financial support to pregnant women, introduce universal healthcare, increase spending on girls’ education and improve sanitation by improving access to toilets.

Some of these efforts have been met with criticism. Independent surveys indicate the sanitation drive has been ineffective, and a United Nations official said the program has exacerbated the problem of manual scavenging — in which poor laborers clean sewers by hand — because many new toilets aren’t connected to a continuous water supply.

In the last few national elections, the BJP has lost the women’s vote to rival parties. A 2017 Pew Research Center survey found that while Modi was generally popular, women were more critical of his leadership because of rising prices, pollution and religious tensions.

“Previously, the Congress had a very minor edge over the BJP, but now we might see some shift in women’s vote in favor of the BJP,” said Sanjay Kumar, director of the New Delhi-based Center for the Study of Developing Societies. “In 2019 the BJP could have an advantage in women voters mainly because there has been a lot of focus on policies and programs aimed at women.”

The party also voiced support for a bill that would guarantee women at least a third of seats in the lower house of parliament and the state legislative assemblies. Both the Congress Party and BJP have been blamed for dragging their feet on enacting the legislation, first introduced in 1996.

“I’m a believer that women should be pushed into places of leadership,” said Congress Party leader Rahul Gandhi, the grandson of Indira Gandhi. “I think generally women are smarter than men.”

But analysts say Indian women — who have historically voted along the lines of caste, class, religion and ideology — may not be swayed by such direct appeals.

“Political parties assume that women want welfare and so they should talk about those things,” said Vaishnav, the Carnegie fellow. “But this is often based on a very limited understanding of the female voter.”

According to a 2014 national survey, there were only minor differences between the issues that women and men considered most important.

“Who constitutes the nation? It is 50% women,” said Nikita Sud, an associate professor in the department of international development at the University of Oxford. “The interests of the nation include the interests of women.”

Sud said that instead of focusing narrowly on what they see as “women’s issues,” parties should look at what voters want more broadly. A crisis in India’s farm economy, she said, is not traditionally considered a women’s issue — but women do 80% of the farm work, according to a study by the nonprofit group Oxfam.

Many credit India’s Election Commission with helping to increase female voter turnout. It instituted separate lines for female voters, increased security measures on voting days and made it standard practice to staff some polling booths exclusively with women.

Voter turnout among women has improved the most in some of India’s most socioeconomically challenged states, where the sex ratio is skewed toward men because many families choose not to bear female children.

Some argue that in places with the greatest inequality, voting is an outlet for women to express their voice.

“We call it a silent revolution because it is self-empowerment of women in the Indian democracy.”

Previous post
India is about to hold the biggest election in history. Here are the numbers
Next post
India student leader ‘a symbol of protest’ against PM Modi