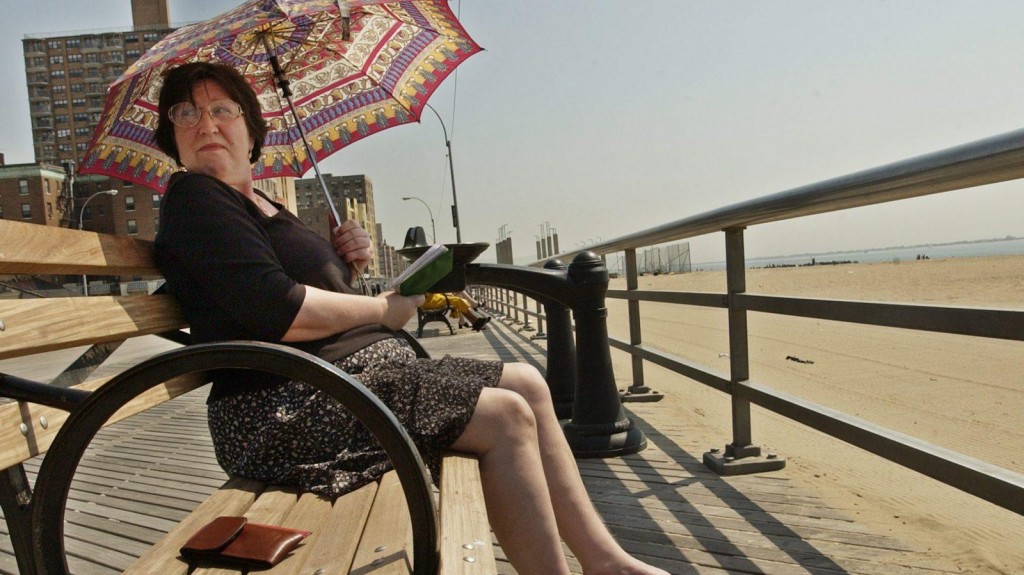 Ala Sirota, a sprightly 70-year-old woman who immigrated to the United States from Ukraine in 1979, thinks that America has changed since her arrival—and she doesn’t like what it has become. Pursing her lips and setting down the hair dryer at the salon where she has worked for more than a decade she mutters, “Many people come here and they are not for this country. They do a lot of damage to this country. They change America.”

When she came to New York from Odessa, she says, she didn’t take handouts from the government. She worked, paid her taxes. Now, she feels that many newcomers to the country are taking advantage of the benefits made available by the government. “It’s too many different people here and I don’t like the way they look, the way they behave,” she says. “We’re immigrants too, but it depends what kind of immigrants.”

Sirota says she is unsure of how things got this way, but she feels certain that putting Donald Trump in the White House would fix it.

“I think he represents what I am for,” says Sirota, her eye fixed on the window facing the street, watching for potential customers. “I like what he promises, I think he can deliver.”

Donald Trump has been popular with many here in the Brighton Beach neighborhood of Brooklyn, where he earned 84% of the Republican vote in the primaries—the sixth-highest share in the city. Brighton Beach is one of the oldest enclaves in New York for immigrants from the former Soviet Union—so much so, that it is sometimes called “little Odessa.” The main thoroughfare steps away from Sirota’s salon is lined with Russian bookstores, clothing boutiques, delis, and butchers. Restaurants and cafes line the streets serving pirogi, borscht, house-cured herrings, and caviar.

Soviet émigrés in the United States overwhelmingly support the Republican candidate, setting them apart from other immigrant communities. While Trump’s remarks on immigration and his comments about “extreme vetting” for immigrants have distanced many immigrant communities, local political observers expected him to win the Russian-speaking community by a large margin.

According to preliminary results of a survey of about 700 Soviet émigrés in New York, Cleveland, Ohio, Florida, and Boston, 62% are planning to vote for Trump, says Sam Kliger, founder and chairman of the Research Institute for New Americans (RINA), a think tank focused on the country’s Russian-speaking community. He says that Soviet-born immigrants in the US predominantly voted Republican in the past three presidential elections.

Evgeny Finkel, an assistant professor of political science and international affairs at George Washington University, said these voters “see the Republican Party as more hawkish in their foreign policy towards the Soviets and more willing to stand up against communism.” It’s a view that dates back to former US president Ronald Reagan, who is celebrated by many in the Russian-American community for his role in the downfall of the Soviet Union.

Boris Korosty, who immigrated to the US 27 years ago, stands smoking a cigarette in the doorway of the picture-frame shop he runs steps away from the Brighton Beach Avenue. “Hillary would take us towards something like socialism. She has the same mentality like Mr. Obama—bigger government, more welfare, more this, more that,” he says. “I have seen what this does, this is not a good thing.”

He shares Sirota’s dim view of America’s future. “What scares me is that I saw one of the biggest countries fall down in a few days because of wrong leadership. No war, nothing. Boom, no more Soviet Union. Scares me, a lot.” Another reason he backs Trump? “At least he is a tough guy,” said Korosty. “What kind of president falls down while she is walking?”

A little distance away from Korosty’s store on the boardwalk, portly middle-aged men sit at ocean-view cafes drinking beer and smoking. Women with perfectly coiffed hair walk by in groups on evening strolls, taking in the salty ocean air.

Alexander, 45, sits on a scratched-up wooden bench facing the water. He does not really like either candidate, but feels that given a choice he will elect to vote for Trump. “He has no real political experience—but maybe this is good,” says Alexander, who moved to the US about 20 years ago and works as a trader, and spoke on the condition that his last name be withheld. “We need a management guy, a business man. Someone who understands how to spend money.”

Finkel says Trump’s status as a Washington outsider is a big part of his appeal to voters who remember life in the Soviet Union, where an intuitive distrust of politicians was rampant. “There is a tendency to believe that politicians are crooked,” says the Ukrainian-born Finkel, “and therefore Trump has an appeal as an outsider from the business world.”

Russia has loomed large in this election, starting with questions about the nature of Trump’s apparently warm relations with Russian president Vladimir Putin. Trump called on Russian hackers to find Democratic challenger Hillary Clinton’s missing emails. His former campaign chairman, Paul Manafort, resigned from the campaign after allegations over his past work for pro-Russian Ukrainian oligarchs. And Clinton, in the Oct. 9 presidential debate, accused Russia of trying to influence the election in Trump’s favor.

Putin is a divisive figure in the community, and Trump’s much-rumored relationship with him evokes a variety of reactions. Some think that Trump would also be a strong leader like Putin, some scoff at reports that Trump and Putin share mutual admiration, some believe that Trump will change his mind once he is in office and familiarizes himself with Russian politics, while some believe that as a tough negotiator he will be able to deal with Putin from a position of strength. But one thing most agree on is that it is a good idea for the next US president to work constructively with Russia.

“Trump and Putin are not friendly, they are from different planets,” said Alexander. “But it is a good thing to be friendly with Putin, he is powerful. Russia and the US are two of the biggest countries, so we need to be talking to them.”

Trump’s reputation for being “tough” comes up in many conversations about the candidate.

But there’s at least one group of voters here who do not share the same degree of enthusiasm for Trump: the younger generation of the Russian-speaking community, who either arrived in the US when they were very young or were born here. “The younger generation consider themselves more American,” said Kliger. “They went to college here and are more liberal than their parents generation.” He says that in 2012, when a majority of the community supported Republican candidate Mitt Romney, the younger cohort was split evenly. This year, he expects 55% to vote for Clinton.

Diana Khabenskaya, 19, will be voting for the first time in this election. Her father, who immigrated from Moscow 22 years ago, is supporting Trump. But like many of her friends, she ardently supported Bernie Sanders. Now, she finds herself unsure. “Now that Bernie is out I don’t know who I will vote for,” said Khabenskaya. “Bernie has experience and stuff, he understands the people. The candidates this year are a joke. But I hear a lot of Trump in this neighborhood.”

Those following the community’s voting preferences say they doubt Trump’s brash talk about women or the sexual-assault allegations made against him in recent days will do much to affect his popularity here. As Ludmila Isurin, associate professor of Slavic and East European languages and cultures at Ohio State University, has noted, Trump’s distaste for political correctness has won him favor with Russian-speaking voters.

“Trump is more appealing because he is more straightforward and this plays well with Russian nature,” says Isurin, the author of Russian Diaspora: Culture, Identity, and Language Change. “Russians don’t beat around the bush, so to speak.”

What’s on the inside

Over the years, Brighton Beach has undergone many transformations. Korosty’s friends told him stories of how 35 years ago, crime was high and people were wary of walking on the streets at night. “When the Russians started to come in, they brought commerce, there were people on the streets, much less crime,” he said. “I can walk at 2am here and I am not afraid. I keep my store door open when it is dark already, I don’t worry about it.”

In recent years Brighton beach has seen a influx of people of different ethnicities, and many of the Russian-speaking community find themselves uncomfortable with the change. There’s “a degree to which Trump’s anti-Muslim and anti-immigrant rhetoric resonates with them,” said Finkel. “There is a certain degree of xenophobia, especially anti-African American and anti-Mexican.

On a side street by Brighton Beach Avenue, Mitali Rubgsob, 43, sells draft beer in plastic take-away bottles. Originally from Kiev, he moved to the US 16 years ago. “US supposed to be very careful about what kind of people come here,” he said. “For the past five years, I see a lot of new people come to this neighborhood. And I’m sure that nobody checks nothing about these guys. Someday this can be dangerous. It’s a little bit scary.”

But Trump’s appeal here isn’t limited to what he says he’ll do on social issues. Trump’s promises to lower taxes and cut government spending also are attractive to them. Gene, 39, immigrated from Moscow 16 years ago and works as a computer consultant. “Why do I support Mr. Trump? Because I pay $70,000 in taxes,” he said, playing with the metal bracelet in his hand as he sat sipping coffee, facing the water. “I believe a lot of people don’t understand that he is a really good guy. He looks like kind of crazy but the question is what is inside. Inside he is a good guy.”

Previous post
Donald Trump promised Indian Americans that the US will be “best friends” with India
Next post
“I live here, why should I be afraid?”: South Asian immigrants respond to Trump’s election with uncertainty