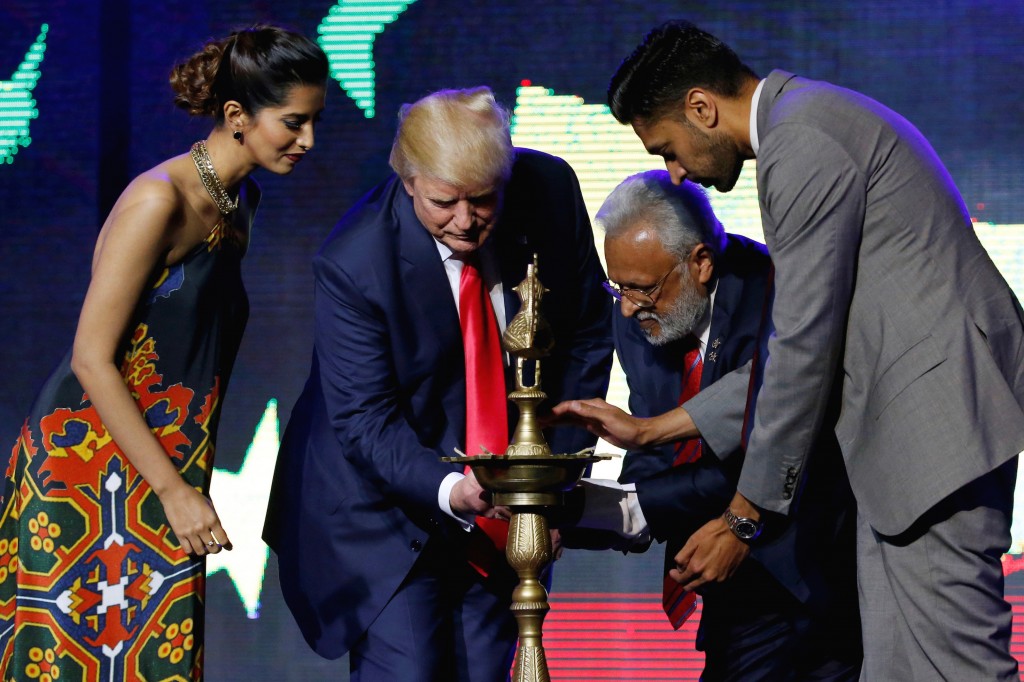 The charity event, which was not listed as an official fundraiser for Trump, was touted as a “mega Bollywood fund-raising event in the US for victims of terror in America and around the world.” In a video on the group’s website advertising the event, Donald Trump spoke with Bollywood music thumping in the background. “It will be an incredible evening,” he said. The proceeds for the event will benefit Hindu refugees and Kashmiri Pandits, a community of Hindus from the Kashmir Valley in India.

The Republican Hindu Coalition was formed in 2015 by Shalabh Kumar, a Chicago-based businessman with deep ties to the Republican Party. Its goal is to increase the clout of Hindus in Republican politics, and the group has donated about $1.5 million to Trump’s campaign, Kumar told New Delhi Television. It has also promised to donate at least $10 million to GOP candidates this election cycle.

The evening had the air of a carnival, with groups of Indian Americans arriving with friends and family, some dressed in festive sequined Indian attire, greeting friends at the door, chatting about the performances they were most excited to see. Loud Bollywood music pumped out of speakers as the crowd began to settle down into plastic chairs, between placards that read, “Trump Great for India,” “Trump for faster green cards,” and “Trump Against Terror.”

But as cars full of Indian Americans and Trump supporters streamed into the New Jersey convention center’s parking lot, a group of young people stood at the side of the street chanting “Donald Trump has got to go, hey hey, ho ho.” They held up signs that read “South Asian Dump Trump”, “Hindus believe #weareone” and “This yoni (vagina) grabs back #Nevertrump”.

“I just wanted people to know that not all Hindus support Donald Trump,” said Roshni Bhambhwani, who grew up in New Jersey and saw the flier for the event and decided to organize a protest on Facebook. “These people who are showing up should know that they are supporting Trump and everything that he says about women, about Muslims, and they should be ashamed at themselves for being at this event.”

The show opened with a terror-themed skit. Two couples began a slow waltz, with the US flag as a backdrop. The background switched abruptly to flames as bearded men, their faces covered, wearing robes and carrying comically large guns, attacked, as evil laughter erupted from the speakers. As the dancers sat cowering in the middle of the stage, six men dressed as police officers stormed the stage and mock-killed the two men playing terrorists. Then all ten stood up and placed their right hands on their hearts as the star-spangled banner played, and the crowd put away their snacks to stand for the national anthem. After a somber moment, the music switched suddenly to “Born in the USA” as performers danced energetically with American flags.

At the Republican Hindu Coalition Trump event, fake Michael Jackson was followed by dancers attacked by jihadists and rescued by Navy Seals: pic.twitter.com/Ta90bv3Lw5

As the evening wore on, Indian film actors such as Prabhu Deva, Malaika Arora Khan, Sophie Choudry and Shriya Saran took the stage and entertained the crowd with dances to popular film songs. At the back of the large hall, families toting young children lined up for butter chicken, pao bhaji and samosa chaat, catered by a local company called “Bollywood Flavors”. Some sat in the audience munching on fresh popcorn, cheering every now and then. Here and there in the crowd, a smattering of older white men and women stood out, some wearing his signature red cap, and others in t-shirts that read “Hillary for prison.”

As “God Bless the USA” blared through the speakers, and the crowd stood up on their chairs to take pictures and videos, Donald Trump walked on stage. He lit a ceremonial candle along with Kumar. “I am a big fan of Hindu and I am a big fan of India,” he said, smiling, as the crowd roared with approval.

Trump praised the Indian prime minister Narendra Modi as a “great man,” and promised a strong US-India relationship during his presidency: “Indian and Hindu community will have a true friend in the White House, that I can guarantee.”

Calls for a fight against Islamic terrorism were received by cheers in the audience. “We appreciate the great friend that India has been in our fight against radical Islamic terror,” he said. “We will stand shoulder to shoulder with India in sharing intelligence and keeping our people safe, mutually.”

Donald Trump’s anti-immigration stance has been a cornerstone of his campaign. But despite his many disparaging comments about immigrants, he has found unexpected support among Indian-Americans, many of whom are immigrants or first-generation Americans. Anti-Muslim rhetoric in particular, like Trump’s June proposal to ban Muslim immigrants, seems to have struck a chord for some. “Muslims invaded India and killed 80 million Hindus,” yelled Vincent Bruno, a resident of New Jersey, in front of a poster for the group Hindus for Trump that depicted Trump sitting on a lotus in the colors of an American flag.

Trump has previously attempted to differentiate between skilled and unskilled immigrants, a distinction that would be reassuring to his Indian American base. In one of his many flip-flops, in March Trump softened his stance on skilled immigration, saying, “We need highly skilled people in this country, and if we can’t do it, we’ll get them in.” Soon after, however, Trump said. “I will end forever the use of the H-1B as a cheap labor program, and institute an absolute requirement to hire American workers first for every visa and immigration program.”

The H-1B allows for highly skilled foreign workers to work in the US. A majority of Indian Americans enter the country as skilled workers, with over half of all visas under the H1-B program going to Indians in 2011. Indians are also the fastest growing group of illegal immigrants in the US with nearly half a million unauthorized Indian immigrants in the country in 2014, according to Pew Research.

“He is not limiting immigration, he is going to limit illegal immigration and I am completely in agreement with that,” said Ganpati Bhat, 58, who drove 2 hours to attend the event with his family from Phoenixville, Pennsylvania, where he works in IT. He moved to the US about 35 years ago from Bangalore, India, on an H1-B visa.

Trump’s stance on India itself has been unclear so far. At a controversial speech in April, Trump mockingly impersonated an Indian call center worker. “You ever call up on your credit card, you want to find out about your credit card,” he said. “Guess what, you’re talking to a person from India. You say, ‘how the hell does that work?’”  But, on Saturday, Trump sounded unequivocal in his praise. “India is a key and strategic ally,” he said. “Under a Trump administration we are going to become even better friends, in fact I’ll take the world even out because we are going to be best friends.”

Winning over the Indian-American community is valuable for Donald Trump and the Republican Party. The over 3.1 million Indian Americans in the United States make up one of the richest racial or ethnic groups in the country, with many of them working as doctors, entrepreneurs, educators and engineers. Indians have a median income of $88,000, as against the national average of $49,8000. Indian Americans are also amongst the most highly educated racial or ethnic groups in the United States.

Indian Americans constitute only 1% of the population, but they have become significant donors for both parties. Kumar, who is also the Chairman of Indian American Advisory Council to the Republican Party, has emerged as one of Trump’s biggest backers. He and his wife have already donated $898,800 to the campaign. Over the past five years he has donated over $100,000 to the party and its candidates. “I believe that Hindus should have a powerful voice in American politics,” said Kumar, in his speech introducing Trump on Saturday. “We have made great contributions to America as individuals and communities, but now it is time to contribute to the political life of the country in a big way as Hindus.”

“While previous generations were focused on assimilating, young Indian-Americans today have other priorities,” said Milan Vaishnav, senior associate for the South Asia Program at the Carnegie Endowment for International Peace. “We’re seeing this in terms of the growing numbers of Indian-American political candidates, the rise of Indian-American interest and lobbying groups, and—overall—a much stronger presence in Washington and key state capitals.”

“I’m here to see what he has to say,” said Jagat Mehta, 43, who moved to the US from India 30 years ago and now has a healthcare business. While Mehta usually votes Democratic, he isn’t a fan of Obamacare, and feels that Trump’s approach to healthcare would be better for his business. While he doesn’t appreciate his comments on women, Trump’s promises of low taxes and a tough stance on immigration appeal to Mehta. “This is also my country, if he wants to tighten the borders, I’m all for it.”

Some though, were mostly there just for the dancing. “We are here to see [Bollywood actor] Prabhudeva,” said Chandu Kashyap, who lives in New Jersey and works in IT. Kashyap, who attended the event with a group of his friends, said he was also curious about what makes people support Trump. “I wanted to see what he is up to, what makes people follow him.”