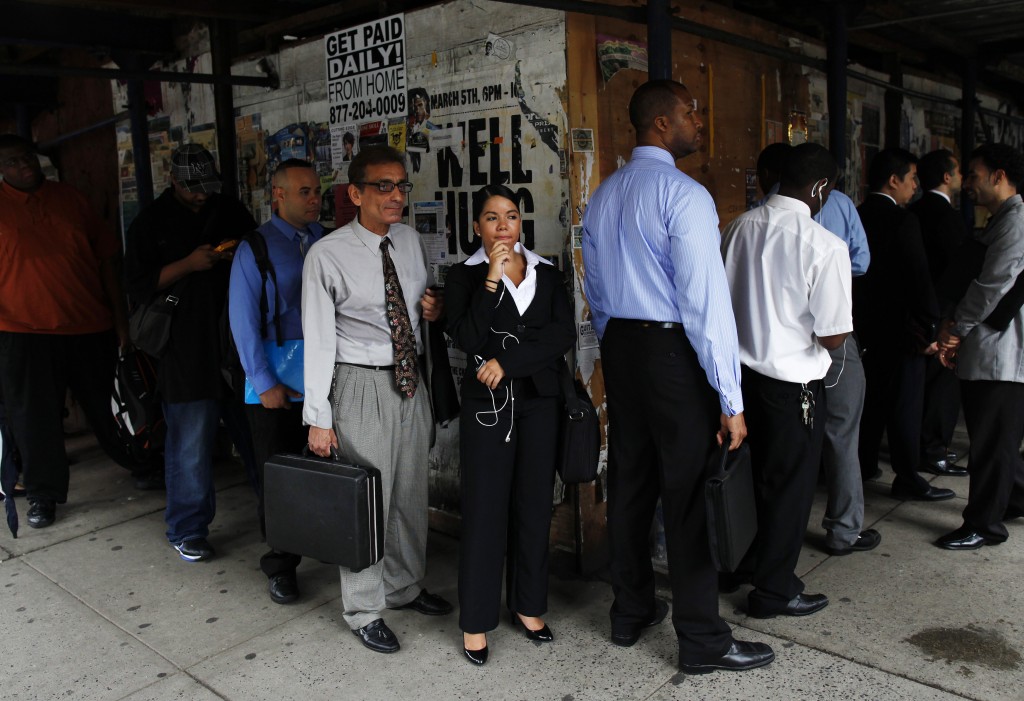 The line at the job fair is not the result of immigration to the US. Credit Reuters/ Shannon Stapleton

“Decades of record immigration have produced lower wages and higher unemployment for our citizens, especially for African-American and Latino workers. We are going to have an immigration system that works, but one that works for the American people.” —Donald Trump, in his 2016 Republican party nomination acceptance speech

If US presidential candidate Donald Trump wants an immigration system that works for Americans, he might want to consider one with far fewer restrictions than he’s proposing.

Immigrants don’t cause high unemployment. In fact, a century of data suggests Trump has both his chronology and his causation reversed—it shows that a thriving US job market causes immigration to rise.

“Immigrants are attracted to the United States when the economy is growing and jobs are being created for both immigrants and native-born Americans,” says David Bier, an immigration policy analyst at the Cato Institute, a libertarian think tank in Washington. “When immigrants come, that’s a sign of the economy doing well.”

Using data from the US Census Bureau, the Bureau of Labor Statistics, and the Department of Homeland Security, Bier, in a recent blog post, put together a chart that illustrates this. (His chart shows immigration levels back to 1820; we focused on the portion of the data for which he had both immigration and unemployment rate.) 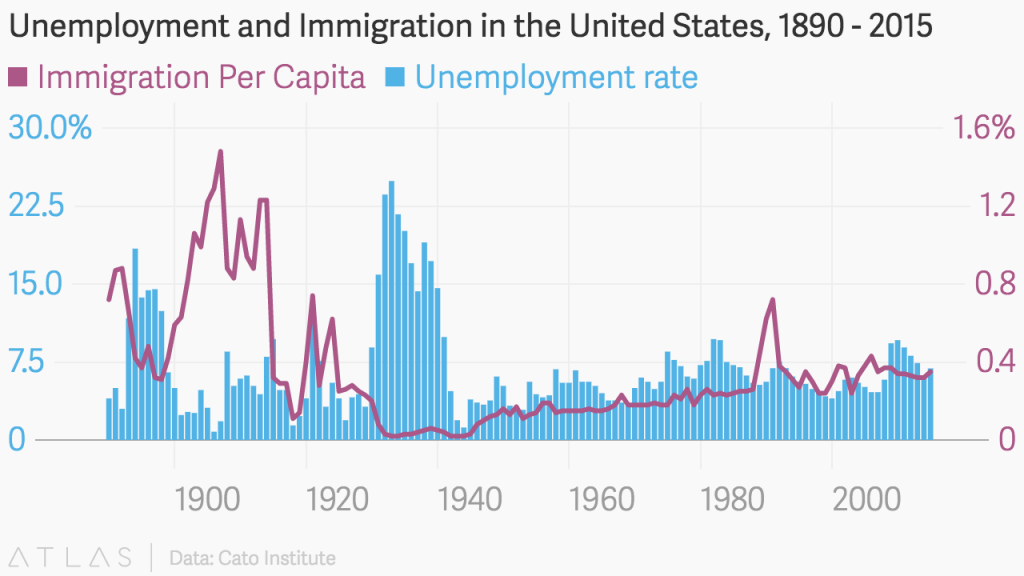 Trump was also mistaken in his assertion that higher immigration results in lower wages for Americans. In fact, the opposite is true, as Quartz has noted before. In a 2012 study (pdf), economic professors Gianmarco Ottaviano of the London School of Economics and Giovanni Peri of the University of California, Davis, found that immigration in the US between 1990 and 2006 improved the salaries of native-born workers on average by 0.6%. The study also looked specifically at native-born workers with no high school degree, the slice of the US population that is commonly thought of as being most vulnerable to competition from immigrant labor, and found that in their case, too, there was a small, positive impact (between 0.6% and 1.7%) on the wages of native-born workers.

How does this happen? As Michael Greenstone at the University of Chicago, and Adam Looney, the deputy assistant secretary for tax analysis at the US Treasury, have argued in their work at the Brookings Institution’s Hamilton Project , immigrants tend to complement the skills of native-born workers, and create new jobs instead of competing for the same, finite set of jobs. For instance, immigrants with fewer skills working in industries such as agriculture or construction help grow US enterprises and farms by increasing production and consuming goods and services themselves. In doing so, they increase the responsibilities and salaries of native-born workers with higher skills, and create more jobs for them.

Trump made one other serious error in his interpretation of the data. The “record” level of immigration he refers to is nothing of the sort—not when you measure it properly, as a percentage of the population, rather than basing it on absolute numbers.

“If you don’t control for the size of the population, you’re comparing a much smaller country to a much bigger country,” said Bier. “It’s acting as though you’re going to have the same impact if a million immigrants enter China, with a population of 1.4 billion, or the United States, with a much smaller population of 300 million.”

By that measurement, the last few decades have had below-average immigration. In the current decade, Bier noted, per-capita immigration has been nearly 30% less than the historical average.