Beef Ban in India Reaches Into Cages of Lions and Tigers 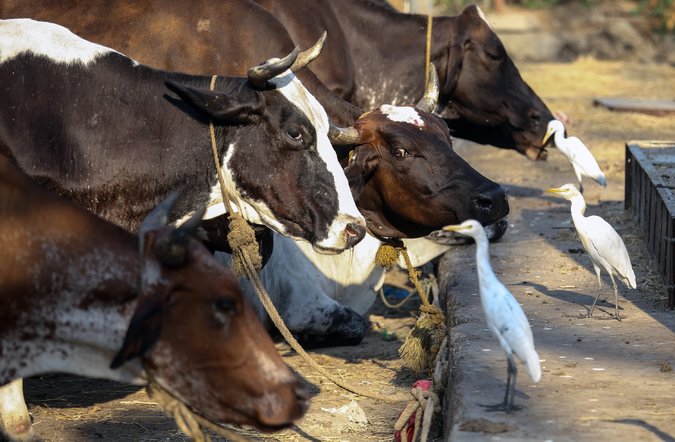 MUMBAI, India — Palash, the largest tiger at the Sanjay Gandhi National Park in Mumbai, still paces his cage for the hour leading up to dinner and still pounces on his meal when his handlers lift the gate to his feeding room. But lately what the 440-pound feline finds is not his usual 15 pounds of raw beef, fresh from the slaughter.

Instead, he and the park’s eight other Bengal tigers, three lions, 14 leopards and three vultures are subsisting almost exclusively on decidedly lighter fare: chicken.

The Maharashtra state government, led by the country’s governing Hindu nationalist party, recently banned the possession and sale of beef, imposing religious dietary restrictions on Hindus and non-Hindus alike. Violations can be punished by up to five years in prison.

The law has been sought by Hindu right-wingers, who helped bring Prime Minister Narendra Modi and his Bharatiya Janata Party to power last year. Their ability to get the ban passed is seen by many as a sign of their growing power in the B.J.P.-led governments in important states. 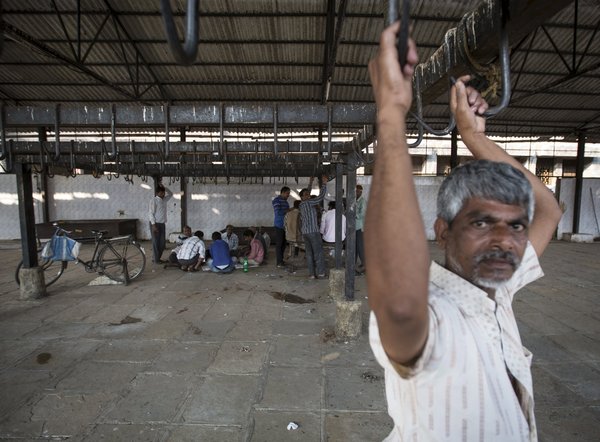 Workers at a slaughterhouse in Mumbai, India. Beef traders are in their third week of a strike against the state beef ban. Credit Danish Siddiqui/Reuters

The new rules caused grumbling from Mumbai’s cosmopolitan, sometimes beef-eating elite — a group that includes some Hindus — who were sore over the sudden disappearance of steaks in restaurants. Others were unsettled by the rising culture wars between the Hindu right and those who oppose its agenda, including minorities. In this case, that group includes the state’s mostly Muslim cattle traders and meat retailers, who fear the ban will damage their businesses.

The traders are now weeks into a strike over the ban, refusing to supply shops with even buffalo meat, which is still legal.

And that is where the animals at the national park come in.

Until recently, the animals at the park had feasted on a mixed diet of fresh beef, water buffalo and chicken. But the ban pulled beef from the menu, and the strike — at least for now — put fresh buffalo out of reach.

The animals’ handlers, who seem baffled by the attention in the Indian news media since the ban, give mixed reviews on the switch to white meat.

Babu Vishnukote, one of the feeders, says the animals are devouring the chicken, which he sees as a good sign. But Shailesh Bhagwan Deore, who oversees the care of animals kept in captivity at the park, fears the leaner diet might eventually deplete the animals’ strength.

“In fresh beef, the animals get the taste of blood,” Mr. Deore said. “They enjoy that.”

The fight, of course, is not over what the park’s animals are eating; they will be able to tear into freshly slaughtered buffalo meat as soon as the striking traders begin supplying it again. Underlying the debate is unease among some liberal Indians worried that the ban shows the growing power of the Hindu right in the country.

Neerja Chowdhury, a journalist and political analyst, said the passage of the ban seemed to indicate a kind of quid pro quo between Mr. Modi and the Rashtriya Swayamsevak Sangh, or R.S.S., a Hindu nationalist organization that backed his recent attempts at land reform despite its reservations.

“He’s walking a tightrope because he himself is trying to come across as somebody who is pursuing inclusive politics,” Ms. Chowdhury said. “The general is taking one view, but the foot soldiers are taking a different view.”

The protection of cows is a volatile subject in India, where the animals are revered by the majority-Hindu population.

In a recent interview with The Indian Express, Noorjehan Safia Niaz, an activist, railed against the law, which she says unfairly affects poorer members of the country’s Christian, Muslim and Dalit communities who are reliant on beef because it is generally cheaper than chicken.

“The decision to ban beef is a communal one targeted at the marginalized Muslims and Dalits,” she said, adding that the decision was tantamount to the government “entering our kitchens and asking us what to eat.”

“It is an extremely personal attack,” she said.